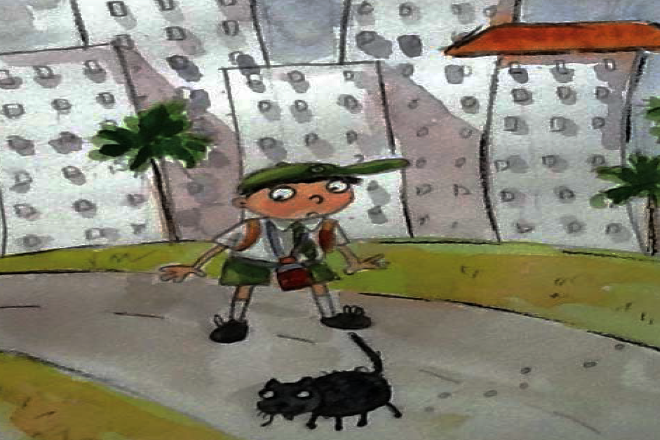 Surya was extremely superstitious. He believed that the number 13 was unlucky, that broken mirrors meant bad luck and he should not get a haircut on Tuesday.

One day, Surya got ready early and left for school. His exam results were going to be announced that day. As soon as he got out of his apartment, a black cat walked by.

“Oh no! A black cat just crossed my path. Surely something bad is going to happen to me today,” he panicked.

At school, Surya remained very worried. Just then, his class teacher, Geeta ma’am, entered the classroom with the exam results. Everyone was anxious.

The teacher called out each student’s name and handed over their papers. When Surya’s name was called out, he went up to her looking sad.

“What happened, Surya? Why do you look upset?” asked Geeta ma’am.

“Ma’am, a black cat crossed my path while I was on my way to school. I am sure that my results are extremely bad,” he replied.

“Not at all! You have scored well. In fact, you have got the second rank. A black cat crossing your path has no impact on your exam results. It is just a superstition. What you have scored is because of how hard you prepared for the exams,” said Geeta ma’am.

“If not for the black cat, I would have stood first,” said Surya sulking.

After she finished distributing the exam papers, Geeta ma’am made an announcement. “We will be going to Elephanta Island for a field trip this tomorrow,” she said.

“Do you know where Elephanta is?” asked Geeta ma’am.

“My mother told me that it is an island in the middle of the sea,” said one student.

“That’s right. Elephanta is an island close to Mumbai. It is also called Gharapuri. We will have to take a ferry from the jetty at the Gateway of India and travel for a distance of about 10 kilometres,” said Geeta ma’am.

She continued, “Be ready by 7 a.m. The school bus will pick each of you up from your house and take you to the Gateway jetty. We will then board a ferry to Elephanta.”

All the students left for home feeling excited about the field trip.

Next day, Surya packed his bag with the delicious snacks that his mother had prepared for him. As he was walking to his stop, the black cat crossed his path again. This time, she also came and stood next to him purring softly.

Surya froze in fear. “Something bad is going to happen today as well,” he thought.

The school bus had already arrived and Geeta ma’am was waiting for him.

“Ma’am, I will not come for the field trip. This black cat crossed my path again, and anything, bad can happen now.

So you please carry on,” said Surya. Geeta ma’am picked up the cat and said, “Look how sweet this cat is. She will come with us on the field trip. Let’s see what happens.”

Before Surya could protest, she grabbed his hand and boarded the bus. At the Gateway of India, everyone got into a ferry. Geeta ma’am sat with the cat on her lap.

But Surya didn’t share any of the excitement. He sat in a corner worried about what was going to happen. He kept looking at the cat which seemed to have comfortably settled on his teacher’s lap.

After an hour, the ferry reached the Elephanta Island. After visiting the caves, the students had lunch together and set out to explore the island.

“Children, we will be leaving in an hour. Make sure you assemble back here by that time,” said Geeta ma’am.

The cat was still roaming close to Surya.

Suddenly, an idea struck him! He walked deep into the woods, while making sure the cat followed him. His plan was to leave the cat there and exit the island, leaving it behind.

The black cat too seemed to walk further into the woods by itself.

“Now is my chance,” he thought and quickly turned around to walk out of the woods.

As he continued walking, Surya realised that he had lost his way. It was getting dark and scary.

A bush close to Surya shook. He jumped in fear. The black cat walked out of it and looked at Surya. It began meowing.

It walked a few steps ahead, and turned to look back at Surya as if asking him to follow it. Having no other option, Surya started followed it, and soon the cat led him out of the woods. He then spotted his friends and Geeta ma’am.

“Where did you go? We had been looking for you!” said Geeta ma’am anxiously.

Surya told her everything that had happened. “You were lucky that this cat found you and brought you back to safety. Cats have good memory and they have a sense of direction,” said Geeta ma’am. “Now I understand how foolish I have been to believe in superstitions,” said Surya, and picked up the cat. “From now on, it will stay with me,” he said petting it. The cat too purred, looking happy in his arms.