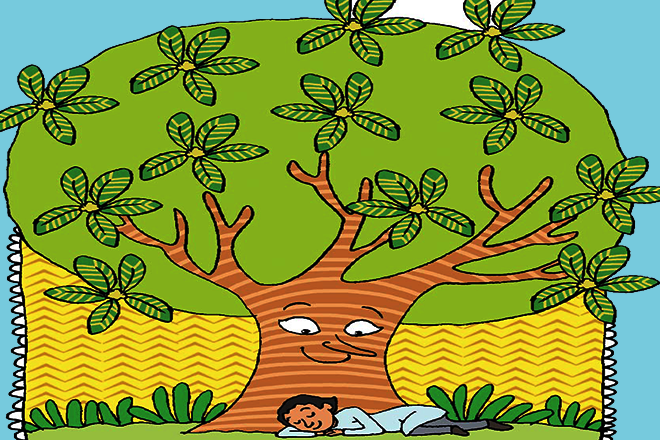 Ramji, the merchant, lived in the village of Karampur. Every day, he would travel to the nearby town on work. The path to the town led him through the forest, so he made sure to return to the village before dusk.

One day, while returning, Ramji stopped to take rest beneath a big mango tree in the forest. The cool shade of the tree and the gentle breeze slowly lulled him to sleep. After a short while, he woke up refreshed.

“I feel so fresh after that nap. I must do this every day,” he thought.

That day on, taking a short nap under the mango tree became a part of Ramji’s daily routine. He felt at home under the tree.

The mango tree, too, began to look forward to Ramji’s stopovers. It became happy whenever Ramji slept under its shade. On days when Ramji would be late, the tree would begin to worry. It would only relax after seeing him walk down the path towards it. This routine continued for several months. Soon, it was summer and the tree began to bear mango fruits. One day, as usual, when Ramji turned up to take rest under the tree, he noticed the ripe mangoes.

“I wish I could taste these mangoes! But I am too tired to climb the tree,” said Ramji to himself, eyeing the juicy fruits.

Almost as if the tree understood him, suddenly one big mango fell down. Ramji was surprised.

“Thank you, dear tree!” said Ramji, picking up the mango and taking a bite. “Wow! This is the tastiest mango I’ve ever eaten!” he exclaimed.

Once he finished eating, a few more mangoes fell from the tree. Ramji collected them in a bag and took them home to his family. He thanked the tree before leaving.

The mango tree was happy to see the delight on Ramji’s face.

Piku, the parrot, who lived on the mango tree, had been observing the friendship between the tree and Ramji.

“My dear friend, you were happy to let him sleep in your shade. But what was the need to give him so many mangoes?” asked Piku.

“He wanted to taste the mangoes, so I gave him some. Did you see how happy he was after eating the mangoes?” said the tree.

“You can’t trust these humans.

They are selfish,” warned Piku.

“You might be right but all humans are not the same. My friend Ramji is not selfish. He is a true friend,” said the mango tree with great conviction.

The following morning, the mango tree was happy to see Ramji arrive earlier than usual. He climbed the tree, plucked all the ripened mangoes, put them in a bag and went away without uttering a word. Piku laughed. “I told you humans are selfish. Ramji can never be your true friend,” he said.

The mango tree was disappointed with Ramji’s behaviour. It thought he would be different from the other humans. But Ramji continued to pluck the mangoes every day till there were none left. Though the tree was sad, it did not confess to Piku about it.

One day, when Ramji was on his way back from the town, he saw three men with axes standing near the mango tree. Ramji realised that the men were planning to cut down the tree. The mango tree hoped that Ramji would help; instead, he quietly walked away from there.

The mango tree was hurt. Piku’s words did not help comfort it.

“You were calling him your true friend but today, when you are in trouble, he vanished because you are of no use to him anymore!” said Piku.

The tree cried silently. It realised that its end was near. Coormamoonaan

The three men were preparing to cut down the mango tree. Before they could swing the axe, Ramji appeared with the forest department staff. The forest rangers stopped the men from cutting the tree and arrested them.

“That’s good, Ramji. In fact, all trees are our friends. We must not cut them down for our selfish motive,” said the ranger. Ramji hugged the mango tree and said, “I will always be your friend.” The tree was elated.

After the humans left, the tree said to Piku, “Did you see that? You were wrong. Ramji is indeed a true friend.”

“Yes, I agree. I am happy to have been proven wrong,” said Piku smiling,