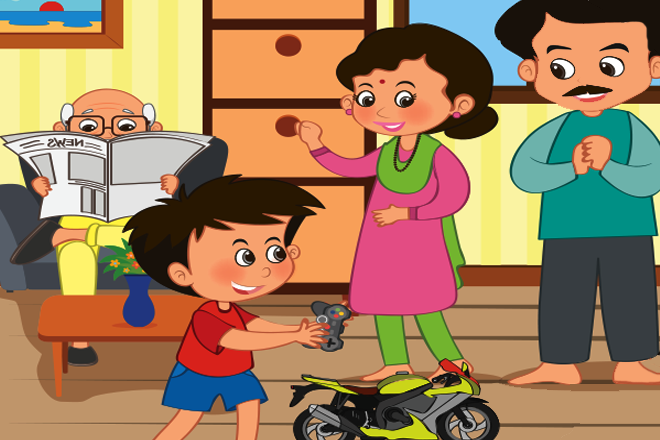 Manav was eagerly looking forward to his birthday, and more so, the presents. For his previous birthday, his grandfather had gifted him a remote-controlled bike and his parents had bought him a video game. He loved them both. He also received several toys from his friends and family.

“I wish I could celebrate my birthday twice in a year. That way, I would get twice as many gifts!” Manav told his parents.

There was a whole week to go before his birthday, but Manav could not contain his excitement.

“Grandpa! What are you going to gift me this time?” he asked eagerly.

“You will have to wait till your birthday to find out,” said Grandpa smiling.

On the day of his birthday, Manav woke up early in the morning and was greeted by his parents and grandfather. He then rushed to get ready for school, as he was eager to distribute his favourite chocolates among his friends and teachers.

That evening, all his friends and relatives gathered at his house for the birthday party. Manav was overjoyed to receive lots of presents. Everyone had a good time playing games and dancing. After the cake-cutting, all the guests had dinner and left.

After the party, Manav was too tired to stay up and open his presents. So, after returning from school the next day, he sat down to open them straight away.

The first present was from his parents. It was an action figure that he had been asking them for. Manav was elated. Next, he opened a small packet from Grandpa.

“What’s this, Grandpa?” he asked puzzled.

“It’s a bank passbook. I have opened an account in your name,” said Grandpa.

Manav was disappointed. “But what will I do with it?” he sulked.

“I know it is not what you expected for your birthday but I wanted you to start saving your money. That way, you’ll be able to use it when the need arises,” said Grandpa.

“I can use my piggy bank for that. What is the use of a bank account?” asked Manav.

“In a bank, your money will multiply as you earn interest on the money in your account. Right now, I have deposited Rs.1000 in your account. You can deposit the money you have received as birthday gifts and your pocket money in it. This amount will keep on increasing as the interest keeps getting added over time, unlike in a piggy bank,” explained Grandpa. “I can take you to the bank tomorrow if you’d like to go and explain it all in detail.”

Manav was curious to understand how a bank works, so he agreed.

Next day, Grandpa and Manav visited the bank in which Manav had his new savings account. Grandpa taught Manav how to fill up a deposit form and deposit the money he had brought along at the counter. Then, he explained to Manav how to get the passbook updated with the entries of all the recent transaction.

This was Manav’s first time at a bank. He felt quite proud of having made his first deposit. His parents had given his some money as well. So, his account balance was now Rs.2500.

“As you keep adding money into your account, you will have enough to buy that bicycle you have been asking your parents for,” said Grandpa.

“You are right, Grandpa. I could buy a bicycle with my own money without troubling my parents!” said Manav excitedly. “But what does the bank benefit out of it?”

“The bank will use your money to loan it to others at a higher interest rate. That’s how the banks make money. For example, if a bank pays you 2 percent interest on your deposit, it could charge 6 percent interest to the person borrowing money from the bank. This difference of 4 percent is what the bank will earn,” explained Grandpa. Manav listened intently as Grandpa continued to explain. “Besides offering loans, banks also charge a small fee for transferring funds from one account to another, exchanging currency and using their locker facilities,” he said.

“I have learnt so much today, thanks to you, Grandpa! This is indeed the best birthday gift ever,” said Manav, hugging his grandfather.