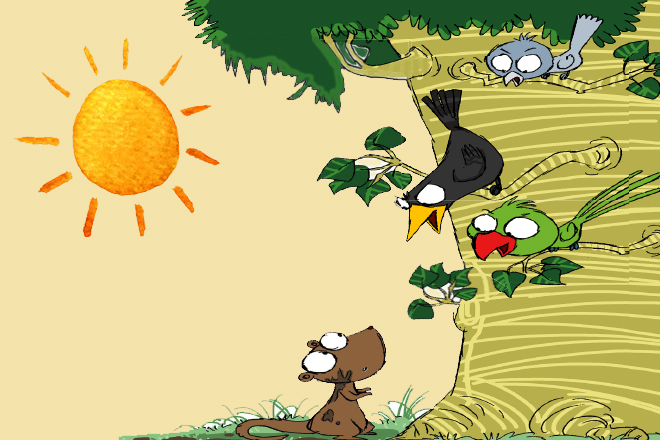 “May I stay here for a few days?” asked a trembling voice.

Beaky, the crow turned to see who this was. She saw a mongoose sitting below the tree.

Beaky asked, “Who are you? Why do you want to live here?”

“My name is Mongoo. The forest is flooded. The rains washed away my home. I have nowhere to go. May I live here for a few days?” Mongoo, the mongoose replied.

By then, other birds had gathered and tried to shoo Mongoo away.

Chilli, the parrot said, “We have eggs in our nests. You can’t stay here. We can’t trust anyone these days.”

Popo, the pigeon said, “Also, you aren’t clean. You have mud on you and it looks as if you haven’t taken a bath in a while.”

Mongoo was upset. She had tears in her eyes. She said, “Please, believe me. I’ve just lost my home and my belongings. Let me stay here for a day or two. I promise I won’t be of any trouble. I will leave once the water drains out.”

Owlie, the old owl was sitting on the branch and watching all this. He said to everyone, “Let her stay for a while. She needs help, can’t you all see that? Mongoo, you can stay here for tonight. There are a few stones below this tree. Make space for yourself there and sleep.”

Friends Of A Feather

The other birds didn’t say anything. Mongoo was relieved to hear this and thanked the old owl. She burrowed herself between the stones.

However, Mongoo couldn’t sleep very well. She kept tossing and turning. She was too hungry to sleep. She got up and sat to think what to do. Just then, she noticed a large black snake. It was crawling up the tree and was very close to Beaky’s nest.

Without thinking twice, Mongoo climbed the tree and pounced on the snake. They both fell on the ground. The snake was long and it wrapped its tail around Mongoo. But Mongoo did not give up. With the help of her teeth, she bit the snake’s tail. The snake loosened its tail and Mongoo managed to escape from its grip.

All the birds woke with the clatter.

“Oh, what is this noise?” Chilli, the parrot asked.

“I think there is a fight going on,” Popo, the pigeon said.

The birds were shocked when they saw Mongoo fighting the snake. No one knew what was going on.

The snake tried to attack Mongoo but she dodged its attack. She pounced on the snake and bit it. The snake shook itself loosely, retreated and was gone in a few seconds.

Mongoo was wounded. There were many marks on her body.

“Why were you fighting that snake?” Popo asked.

“That snake was about to attack Beaky’s nest. I had to fight the snake, otherwise it would have eaten her eggs,” Mongoo said. “I don’t believe what you’re saying. What if you are just pretending to be on our side? You will say that as you wanted to stay here,” Beaky, the crow said.

Chilli agreed with them too. None of them wanted to believe her. Mongoo didn’t know what to say. She felt too weak to say anything.

Owlie, the owl had seen all that had happened. He came down and said, “I watched Mongoo fight the snake to save your nest and eggs, Beaky. She could have died today. She did this in front of you and still, you don’t believe her.”

Owlie continued, “She needn’t have done that. You all were rude to her, but she still helped us.”

Chilli, Popo and Beaky realised their mistake and apologised.

“I’m sorry that I thought you were our enemy. But you turned out to be a true friend,” Beaky said to Mongoo.

Chilli got medicines and cotton. They gently treated Mongoo’s wounds. They gave her some food to eat as well. “Mongoo, you don’t have to go anywhere. Please live with us,” Popo said.

Mongoo was delighted to hear this. She didn’t just get home, but a family as well.