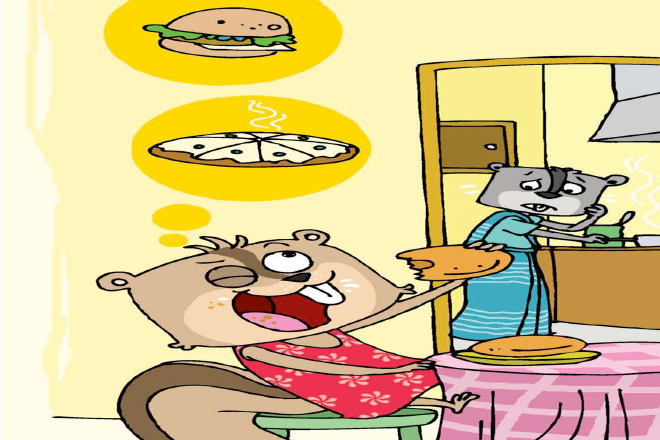 When Meenu, the squirrel’s summer vacations began, her appetite grew by leaps and bounds. If one day she demanded biscuit cake, on another she would crave pizzas and burgers. And while she was having a good time, her mother grew tired of this.

One day, Meenu’s mother said, “Meenu, you’re getting older now and you will need to start becoming responsible. Why don’t you help me out around the house? It is important for all children to develop such skills at an early age.”

Meenu really liked her mother’s idea. She started waking up early in the morning and going for a walk. Then she would spend some time studying, and then later help her mother in the kitchen. After that, she would go out to play with her friends.

In the kitchen, Meenu’s mother started her off with simple things like how to wash the vegetables and store them in the fridge. She taught her the names for various ingredients too. Once she had learned this, she taught her how to prepare simple dishes like rice, dal and other dishes. Meenu had a lot of fun and loved helping her mother.

One day Meenu and all her friends were at the park when they noticed a flier on the bulletin board. It was an announcement about a cooking contest in the colony. The contest was called Kitchen Kids’ and would take place in one week. The kid who prepared the best dish would be awarded a cycle. The chance of winning a cycle interested them all. Chinki, Duggu, Sheenu and Molu didn’t know how to cook; they decided to spend the next seven days at home learning how.

Meenu was feeling sad. Despite it being her summer holidays, she could no longer meet her friends. When she offered to teach them how to cook, her friends weren’t receptive. They felt insecure about the fact that Meenu was already a good cook and her chances of winning were much higher than theirs. So they told her that they didn’t need her help.

The day of the cooking contest was drawing near. Meenu was feeling very lonely. It had been so long since she had seen any of her friends. While they were worried about the competition, Meenu was not. She wasn’t even interested in winning the cycle. The only reason she looked forward to the competition was because she would finally be able to meet her friends.

When Meenu asked her mother what she should prepare at the competition, she asked her to prepare anything her heart desired.

“After all,” she added. “This competition is being conducted so that children can learn something new and become selfsufficient. So it is best that you decide what you would like to make and I’ll help you with your practice batches.”

Meanwhile, Chinki, Duggu, Sheenu and Molu were trying to learn how to make one dish each so that they could prepare it at the competition and win the cycle.

On the day of the competition, all the children assembled at the venue. In order to win the cycle, they would need to successfully complete two rounds and move on to the third where they would have to prepare their special dish.

The first round involved identifying different ingredients. Meenu and all her friends except Sheenu and Molu cleared this round. In the second round, all the children were given a bowl of ice-cream each and asked to identify all the different flavours in it. Duggu, who had barely cleared the previous round, was getting really nervous because he was not able to identify half the flavors. Not only was Duggu eliminated in this round, Chinki was too.

In the final round it was Meenu against three other kids from the colony. Meenu prepared pudding and won the competition.

Chinki, Duggu, Sheenu and Molu regretted the fact that they didn’t learn how to cook sooner. If they had, they would have had a better chance at winning the cycle.

When Meenu was handed the keys to her cycle, she ran towards her friends. “This is not my cycle,” she said. “This is our cycle.” When Chinki, Duggu, Sheenu and Molu realized how much love Meenu had for them, they all gave her a big hug. They congratulated her on her victory and chanted, “Hip-hip. Hurray! Hip-hip Hurray for Meenu!”