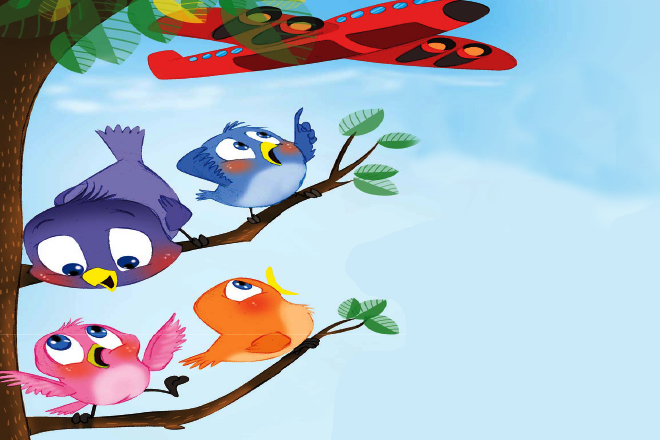 “It is so shiny, unlike any bird I have seen!” exclaimed Coco.

Mini laughed and explained, “That is not a bird. It’s an aeroplane. Humans use it to reach far off places in very little time.”

“But I have never seen any human flying,” said Coco.

“They cannot fly but they can build things that can. So all they have to do is sit inside an aeroplane that will take them from one place to another,” said Mini.

“Mom, how did they build an aeroplane?” asked Sunny.

“Humans came up with the idea of flying when they saw us flying. They thought it would be a faster way to cover long distances, said Mini.

“When did they build the first aeroplane?” asked Coco.

“The aeroplane was not built at one go. The one that you saw today is the result of many scientists working over several decades on different designs. In fact, people have been attempting to fly or build flying devices since ancient times,” explained Mini.

“So, there were other designs?” said Marty.

“Yes, Marty. Do you remember when we flew past the park last week I showed you a lot of people flying kites?” asked Mini.

“Kites are one of the earliest man-made flying objects. People in China designed them hundreds of years ago. Some kites were so big that they could carry a man along with them,” said Mini.

The little ones listened in awe. “Later, the humans discovered that they could fill balloons with hydrogen gas to make them fly.”

“But Mom, balloons are too small,” said Sunny.

“But the balloons I am referring to are so big that they can carry humans with it,” said Mini. “In 1783, the Wright brothers Orville and Wilbur— used hydrogen-filled balloons to attempt flying. Once, a goat was made to fly such a balloon!” said Mini.

The three giggled at the idea.

“Yes, it’s true,” said Mini. “Haven’t you heard Lonu uncle saying that it was his great grandfather who was sent up in that balloon?”

But mom, how did the humans change the design from a balloon to like the one we saw?” asked Marty.

“We helped the humans on this. They understood that our tails and wings help us to fly and maintain balance in the air. So they designed a machine with similar features and soon, they were successful,” replied Mini.

“Mom, our wings don’t just help us to fly, we can even move in any direction we want. Can the aeroplanes do that too?” asked Sunny. “Yes, the Wright brothers dreamt of building a powered machine that could fly and also be controlled by the pilot to change directions. After observing the way we fly, they built the first successful aeroplane. After decades, this model evolved into the one we saw today,” explained Mini. “They must have been

“They must have been delighted with their success,” said Coco.

“Yes, dear. Every human is happy at their success. Every invention these humans make is to make their lives easier,” said Mini.

“Mom, how many people can travel in a single aeroplane?” asked Marty.

“There are aeroplanes of different sizes built today—from the smallest ones that can carry just two people, to bigger ones like what you just saw that can carry over a 100 or even 500. And these aircrafts can travel pretty fast,” said Mini. “Even we birds tear across the skies with our wings,” said Coco flapping her tiny wings.