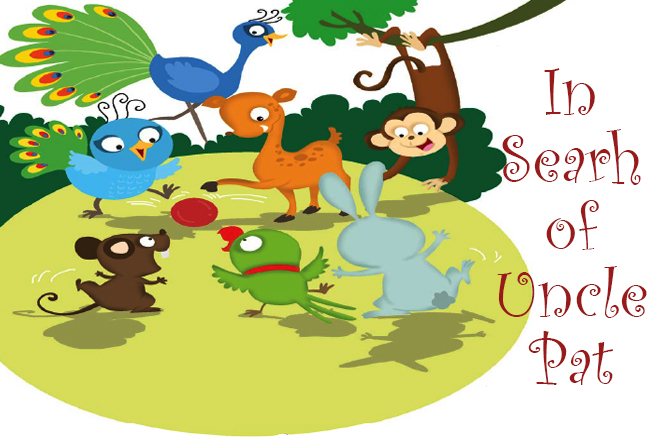 Late one evening, Popo started crying because his father had not yet returned. The neighbours began searching for Pat.

The next morning, Pat had not yet been found. Bobo, the monkey’s father said to Bobo, “Take Popo out to play with you. He has been crying all night. We will continue to search for Pat.”

Bobo, Popo and their friends got together at the ground nearby to play hide and seek. It was Popo’s turn to seek while everyone hid. Popo was peering through a bush looking for his friends when he suddenly heard Ricky, the rabbit’s voice.

“Look what I found! Come over here quickly!” Ricky called out to everyone.

All of them ran towards Ricky who was pointing at something.

“Yes, this can’t be Popo’s as this feather is much bigger,” said Bobo. Popo studied the feather and immediately brightened up.

“Yes. This is my father’s feather,” he declared. “This means he must have been here before he went missing.”

“Let’s split up and look for Uncle Pat. Let’s see if we can find more clues,” said Bobo.

All of them agreed and began searching the area.

“I have found another feather. Uncle Pat must have gone this way,” shouted Dana, the deer.

All of them walked together in the direction where the second feather was found. Soon, they found more feathers along the way which led them to the edge of the forest.

“We have reached the outskirts of the forest. If we walk any further, we will enter the village,” said Bobo.

In Search Of the Sparrows

“Come! Let’s go to the village. I am sure my father is there,” said Popo eagerly.

“No, Popo!” said Piku, the parrot stopping him.

“Humans can be dangerous. They have caught animals from our forest earlier too and taken them away,” said Bobo.

“So what? I am not afraid. I want my father back!” said Popo.

“We understand, Popo. But it is not safe to go there now. First, let Piku fly over the village and see whether your father is there or not,” suggested Mimi, the rat.

Popo agreed. Piku flew into the village, while the other children waited anxiously for him to return. Piku returned after a while. “Popo, I saw your dad! He has been captured by a human. He is tied up to a tree in the courtyard of a house. I saw some humans roaming nearby, so it is not safe to go there now,” informed Piku.

“I want my father back. How do we get him out of there?” asked Popo.

“When the humans were not around, I flew down to talk to Uncle Pat. He said we can help him escape after the humans go to sleep at night. Till then, we will have to wait,” said Piku.

“In that case, let’s start preparing. I have a plan,” said Ricky, discussing his plan with the group.

After the sunset, all of them set out for the village.

“Yes, but once we are in the village, we must walk carefully without making any sound. We should not talk too loudly either,” warned Piku.

As they walked through the village, Piku pointed to a house and said, “This is the house where Uncle Pat is.”

When they reached the house, Bobo said, “Ricky and I will go in and free Uncle Pat. Meanwhile, the rest of you hide here and warn us if you see any humans.”

Piku flew up and sat on a tree to keep an eye out for humans, while the others hid behind the bushes nearby

Ricky and Bobo sneaked into the house where Pat was tied. “Uncle Pat, we’ve come to free you. After we untie the rope, be ready to run,” whispered Bobo.

“Where is Popo?” asked Pat worried.

“Don’t worry, uncle. He is right here, hiding behind the bushes with our other friends,” replied Ricky. Bobo and Ricky bit through the rope and freed Pat.

Ricky ran ahead, leading the way for Pat and the others. Bobo climbed up the tree and escaped by jumping from one tree to another. Piku flew above the rest towards the forest.

But as Pat was running, he tripped over a bucket and fell.

“Who is it? Is anyone out there?” called out a man, coming out of his house to check the noise.

Popo quickly grabbed a stone and threw it far away from where they were. The man went in the direction where the stone had fallen. By the time the man got back, the animals were safely outside the village.

More From Champak: In search of the New World

Once inside the forest, everybody heaved a big sigh of relief. Pat gave Popo a tight hug.

“Thank you all for helping me escape,” said a relieved Pat. “I made the mistake of venturing close to the village. I am glad you found the feathers that I dropped along the way. I hoped somebody would follow the trail of feathers and find me.” “How clever you are, dad!” exclaimed Popo.

All the animals were happy to see Pat back. Everybody appreciated the children’s bravery, but they were told to inform the elders first before they set off on such adventures.