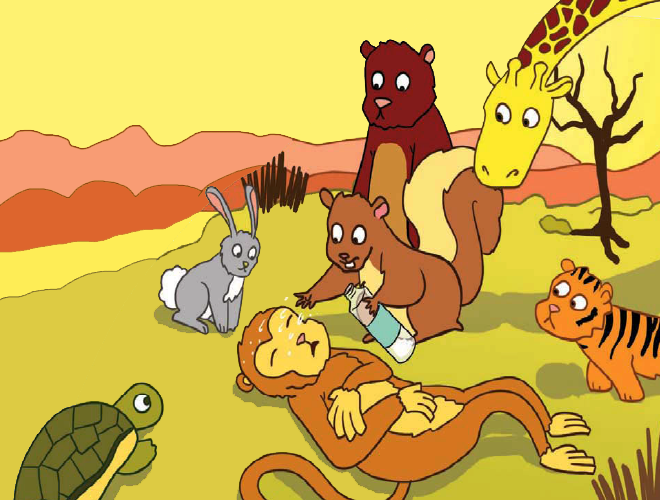 Summer was making life at Ashokvan hard. The sun’s harsh rays beat down on the ground, taking away all the water. The earth was parched, the plants had dried and all the animals were thirsty. Since Ashokvan didn’t have any rivers flowing through it and all the lakes and ponds had dried up, the animals had to travel far, deep into the neighbouring forest to quench their thirst. The severe water shortage meant that all the animals were growing weak. Bhola, the monkey had worn himself out while looking for food all day, when suddenly he started feeling light-headed. Then, without any warning, he fell unconscious.

A crowd gathered around him, as concerned animals gathered to see if they could help.

“He’d wake up the moment we sprinkle water on his face. But we don’t have any water to spare. What have our lives come to?” asked Kani, the crow. Just then, Mili, the squirrel came running and asked all the animals to make some room and give Bhola some fresh air. She then ran back home, came back with a bottle of water and splashed some on Bhola’s face. He regained consciousness and she gave him a drink of water.

The animals who saw this happen were astonished. “Where did you get all that water?” they asked her. “You look so fresh, like you’ve taken a bath!” remarked others.

“As a matter of fact, I had just stepped out of a bath when I saw that Bhola had fainted,” said Mili.

“I had saved it, of course,” said Mili. “When it rained last week, I knew that this was the right time to save water. So, I rearranged the leaves on a few branches in such a way that I could fill them up with water and save it for later.”

The animals were amazed and praised Mili for her ingenuity. Soon, word of Mili’s store of water spread across the forest. Everybody wanted to save rainwater just like her. Even the water minister, Kalu, the bear was impressed and said, “If a little squirrel can save enough water to last her the summer, imagine what we can do together?”

He asked the animals to suggest different ways to conserve rainwater. One by one, the animals gave him their ideas and the good ones were implemented immediately. Slope corrugated roofing was installed on all terraces. The roofs would slope towards pipes that would channel the water into tanks. Slopes, planes and storm drains were all directed towards natural water bodies and tanks, thus enabling more water to be stored for use, instead of running off or evaporating.

By the time they were finished, each and every animal had done something or the other to save rainwater. When it rained, all their hard work came to fruition, and there was enough water stored to last the rest of the summer.

Kalu announced that the rainwater harvesting project was a grand success. He said, “We have enough water to last us a long time. By boiling it before drinking, we can use it well into the future.”

The animals of Ashokvan were very happy and thanked Mili for saving them from the summer.