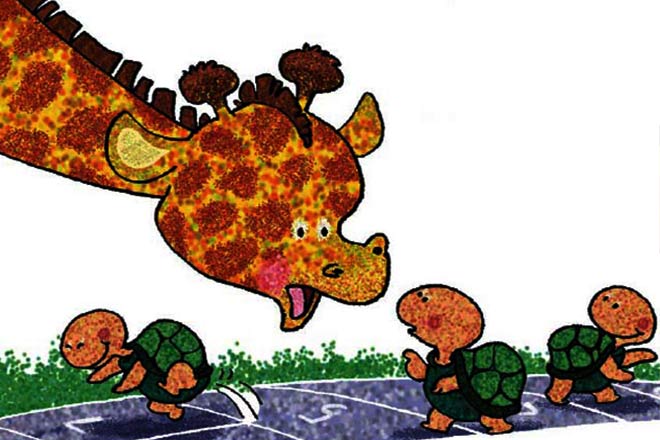 Jumbo Giraffe was a cute little giraffe. He had recently shifted to Amarvan with his parents.

But Jumbo Giraffe wasn’t very happy in Amarvan, and he often wondered if he would ever be happy.

Well, the reason was that Jumbo Giraffe hadn’t made any new friends as yet, and he felt lonely since he stayed at home all day long.

One day, when Jumbo Giraffe’s parents went out of the house, he decided that he would go out and explore the forest. And so, he went for a long walk. A cool breeze was blowing, and Jumbo Giraffe looked around at the lush green trees that were growing all over. “I don’t know why Mum and Dad still think of me as a baby,” he said with a sigh. “They don’t let me go out by myself. I am so big and tall that even Khemu Uncle looks tiny in comparison,” Jumbo Giraffe muttered when he saw Khemu Rabbit who was his neighbour, gnawing on a big red carrot.

Soon, he spotted some baby tortoises. They were flying a kite together. Jumbo Giraffe really wanted to make new friends and have fun playing games with them, just like he did with his friends in the forest where he lived before. And so, he walked towards the baby tortoises.

“Hello! I’m Jumbo!” he said with a friendly smile. “I’m new to Amarvan. Can I play with you all?” The baby tortoises looked at Jumbo Giraffe and shook their heads.

“Oh no!” one of the tortoises said. “You are so big and tall! We cannot play with you!”

They then turned their backs towards Jumbo Giraffe and continued flying their kite.

Jumbo Giraffe shrugged and sighed. “Well, Mum and Dad think of me as small. And these tortoises think of me as big!” he thought to himself and quietly walked away.

He walked further into the forest, wishing that he had at least a friend or two to talk to, when something suddenly hit his leg.

“Hey!” he then heard some voices call.

“Please throw our football back to us.”

Jumbo Giraffe looked up and saw a herd of elephants calling out to him. They were playing in the forest playground, and the football obviously belonged to them.

He picked up the football and walked towards the elephants. “Hi! Will you let me play with you? I’m new to the forest!” he said hopefully.

“No,” the elephants said firmly. “You cannot play with us. You are very small and you might get hurt if you play with us. If that happens, your parents will be very upset with us. So, we cannot allow you to join our games!” The elephants took their football from Jumbo Giraffe and went back to their game.

Jumbo Giraffe sighed. He felt very disappointed but didn’t say a word. He sat on a nearby rock and watched the elephants quietly.

“I really cannot figure out whether I am big or small,” he said to himself. “Some of the animals insist that I am too big to play with them. And there are others who refuse to let me join them saying I am too small! Sigh!”

Tears welled in Jumbo Giraffe’s eyes. He had never felt so sad or lonely ever before. He heard the sound of chattering and looked up only to see a baby monkey hanging from the branch of a nearby tree. The monkey seemed to be enjoying himself thoroughly. “This monkey is far better off than I am,” Jumbo Giraffe thought to himself. “He can amuse himself with his own antics. I can’t even hang like him. Hey! Maybe I can ask him to play with me. He might just agree.”

But before Jumbo Giraffe could say a word, the baby monkey jumped on to another tree and disappeared deep into the forest.

“Oh!” Jumbo Giraffe said, feeling quite left out once again. He decided to return home since he could not find anyone to play with. He started to walk away when he saw the elephants’ football fall into a swamp.

“Oh no!” the elephants said, sounding very disappointed. Jumbo Giraffe watched as the elephants tried their level best to take the football out of the swamp with the help of their trunks.

He realised that they couldn’t go very close to the swamp since they had heavy bodies and were likely to get stuck in the swamp. Unfortunately, the elephants’ trunks were not long enough to pull the ball out of the swamp either.

Jumbo Giraffe felt very sorry for the elephants. They had been having so much fun just a few minutes ago. They looked very disappointed now. “May I try taking the football out of the swamp?” he asked politely. The elephants looked at him hesitatingly. One of them then said, “We would be highly obliged if you could do that. But please, do take care of yourself and don’t go very close to the swamp. We do not want you to get into any trouble.”

Jumbo Giraffe nodded and went closer to the swamp. He tried pulling the football out with his legs, but wasn’t successful. “I am unable to reach the football on my own,” he told the elephants. “Can somebody hold me from behind please? I will be more relaxed when I try to reach it then.”

One of the elephants then held Jumbo Giraffe tightly from behind as per his suggestion. Jumbo found that he could reach the football easily now. In no time, he retrieved it from the swamp and smartly kicked it towards the elephants.

“Hurray!” the elephants cheered as they picked up and hugged their football. All the elephants then thanked Jumbo for his help and invited him to play with them.

He played with them till it was time him for him to go home. He then left the playground, promising that he would come back the next day, and started walking towards his house.

“Our kite is stuck there,” one of the tortoises said and pointed towards a high branch of the tree. “Is that so?” Jumbo said. “Wait, I’ll get it down for you.” Jumbo was quite tall since he was a giraffe. And so, all he had to do was stand on his toes and stretch to be able to reach up to the branch of the tree. In no time, he took the kite out of the tree and gave it to the baby tortoises.

“Thanks a lot!” the baby tortoises said, feeling thrilled now that they had their kite back. “And sorry about the way we behaved earlier. We will be your friends now on. Come, fly the kite with us.”

Jumbo smiled. He was glad that the baby tortoises wanted him to be their friend and join their games. “Thank you,” he said politely. “But I will join you tomorrow. It is time for me to go home now.”

“OK,” the baby tortoises said. “But please promise us that you will come back tomorrow!”

“I promise!” Jumbo said and waved. He then walked back home, feeling quite happy. He was sure that he would be happy in Amarvan too, just like he had been in the forest where he lived before, now that he had so many friends.