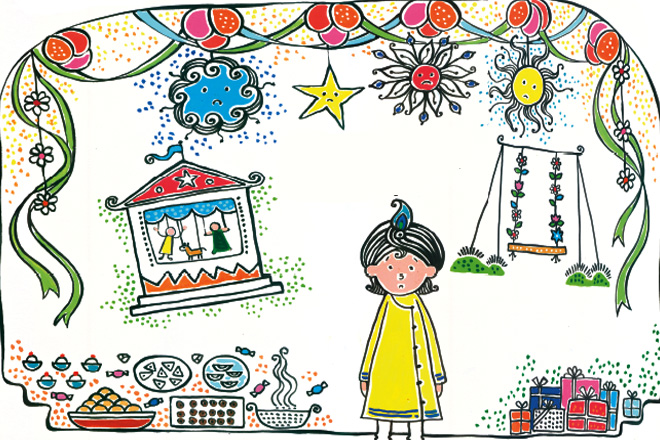 This is a tale of the country called Kashabpuri. It was a beautiful country ruled by King Mohanchandra.

Mohanchandra lived in a grand palace with his Queen and a son named Nitin. Prince Nitin was a pampered child. His parents loved him a lot.

Whenever King Mohanchandra went to another country, he bought lots of gifts and toys for the Prince. Prince Nitin was a charming boy and was loved by everyone. And he had become very naughty and stubborn.

The kids of the Kashabpuri kingdom wanted to be friends with Nitin. He often used to ride throughout the kingdom on his horse and all the kids used to wave to him and try to talk to him or play with him.

But Nitin was extremely proud of himself and never spoke to those kids. Instead, he troubled the kids and made fun of them.

He used to wear a Halloween mask and scare young kids. He enjoyed it a lot when those kids used to get scared and cry. Prince Nitin, because of his behaviour, had no friends and was alone.

King Mohanchandra and his Queen tried hard to make Nitin understand, but all was in vain. As time passed, Prince Nitin grew up to be even naughtier and more stubborn.

The New Year was approaching and the king had arranged for a grand celebration. King Mohanchandra sent invitations to many people. Prince Nitin invited all the kids to the party.

Prince Nitin was extremely enthusiastic about the party and made fine arrangements for his little guests. He arranged for gifts, toys, puppet shows and magic shows. He also had the garden decorated with swings for the kids to play and also arranged for some delicious food and sweets.

Prince Nitin was ready to enjoy the party to the fullest with all the kids.

It was evening and the entire palace was shining brightly with colourful lights. The decorations were splendid and beautiful.

Guests started coming in, and the King and his wife extended a warm welcome to all of them.

On the other side, Nitin was eagerly waiting for all his little guests to arrive. Time passed and none of the kids came. The King soon got busy in looking after his guests but noticed that Prince Nitin was upset about something.

He called for Nitin and asked him, “Why haven’t your guests arrived? Did you not invite them to the party?”

To this Nitin replied, “I had invited all the kids to the party, and I do not know the reason why they haven’t come.”

The king said, “You have done all great preparations for the celebration, but have you made friends?”

Nitin looked confused at his father’s question. The king explained, “You have misbehaved with those kids several times and never made them your friends.” Nitin said, “But I had only joked with them.”

The king said, “Yes my child, not everyone likes to be laughed at. How would you feel if someone made fun of you and laughed at you?”

More From Champak: Who’s the Prettiest of Them All?

Prince Nitin understood his mistake and learned a lesson. He was ashamed of his behaviour with the kids and felt sad about all that had happened. The King said to Nitin, “It is never too late to make friends. You can still apologize to those kids and become good friends with them.”

This advice brought a smile on Nitin’s face and he understood that one should not misbehave with others.

Making fun of others or insulting others leaves us friendless and all alone. And loving and respecting others fetches us true friends who shall be with us in good and bad times. Prince Nitin realised his mistake and immediately went to apologise and invite all the kids for the party.