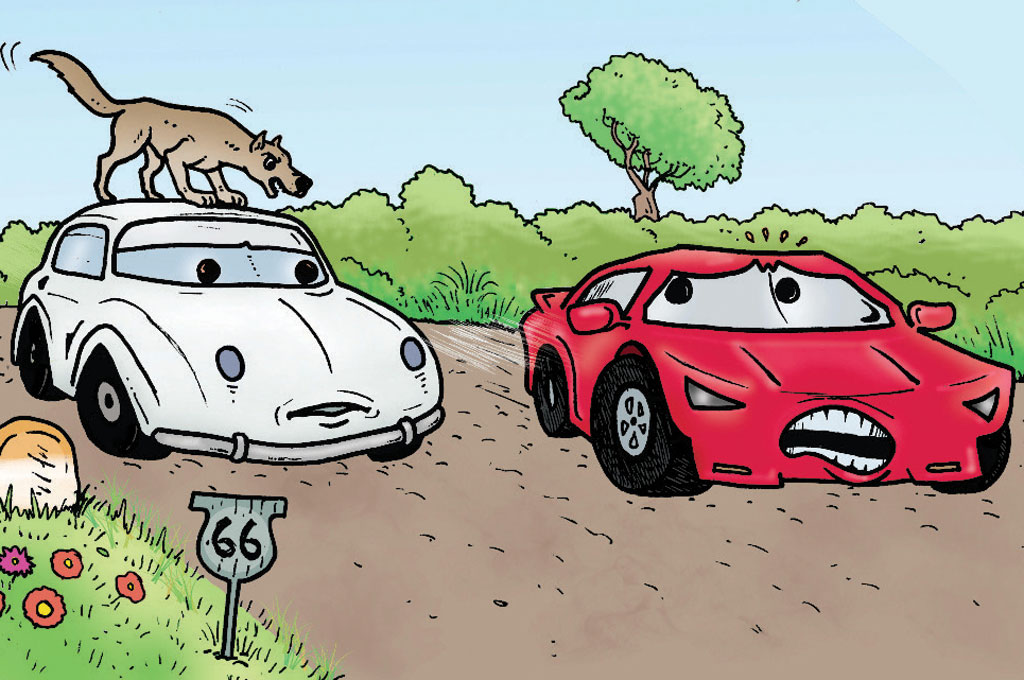 The stylish new red car was proud and boastful.

“I am much more beautiful than you,” it showed off to the other cars.

“Yes, you are,” agreed the old white car. “You are beautiful and technologically advanced than the rest of us.”

“And I forgot to tell you something,” said the red car. “My rear view mirror also doubles up as an electronic monitoring system. When I am reversing, it shows me if there is a vehicle or an object behind me. It makes a sound to alert me if it is too close to me.”

Does this help avoid accidents?” asked the white car.

Just then, Tommy, the dog walked by. Every day, he would climb up the hood of the white car and sleep for a while. Today, too he climbed up the white car. But then, he saw the red car and thought, “Here’s a new car today. Maybe I should sleep on it.”

The red car got scared on seeing Tommy preparing to jump on it. “If that dog jumps on me, he’ll cause dents and scratches. I must avoid him,” thought the red car.

As Tommy jumped, the red car quickly moved forward, taking him by surprise. Tommy fell on the ground. He was hurt. He got up, barked at the car and then walked away.

After a while, “I am going for a drive now,” said the red car.

Just then, the red car had an idea. “Why don’t we have a race?” it suggested excitedly.

“You are sure to win,” said the white car. “I am old and heavier than you. I cannot move as fast as you.”

“That’s no excuse. Are you scared to race with me?” asked the red car.

The cars took their positions next to each other. On the count of three, they set off fast down the highway. Initially, both the red and white cars were neck to neck, driving at the same speed. But the red car slowly increased its speed and raced ahead.

“See how fast I am!” said the red car, taking its eyes off the road to look back at the white car.

“Look out for that truck!” shouted the white car alarmed.

The red car saw a big goods truck heading straight for it. Since it was travelling too fast to apply the brakes on time and the road was narrow, the red car had no option but to veer off the road to avoid crashing into the truck. As it did, the red car skidded and toppled.

The white car rushed towards the red car which lay on the side of the road with its wheels up in the air. It was shaken up by the accident.

The white car, being heavier, pushed the red car and made it upright.

“Are you okay?” asked the white car.

If you hadn’t warned me, I would have been crushed into that truck,” said the red car gratefully.

“Speeding may be fun, but it is dangerous. Don’t worry. Except for a few scratches and dents, you still look beautiful and bright. Speed is your strength; learn to use it wisely,” said the white car.

“You are right. My pride blinded me from seeing how each of us has our own strengths and weaknesses,” said the red car. “I promise to drive more carefully hereafter.”

From then on, the red car was humble about its strength and appreciated everyone else’s too.

One thought on “The Proud Red Car”