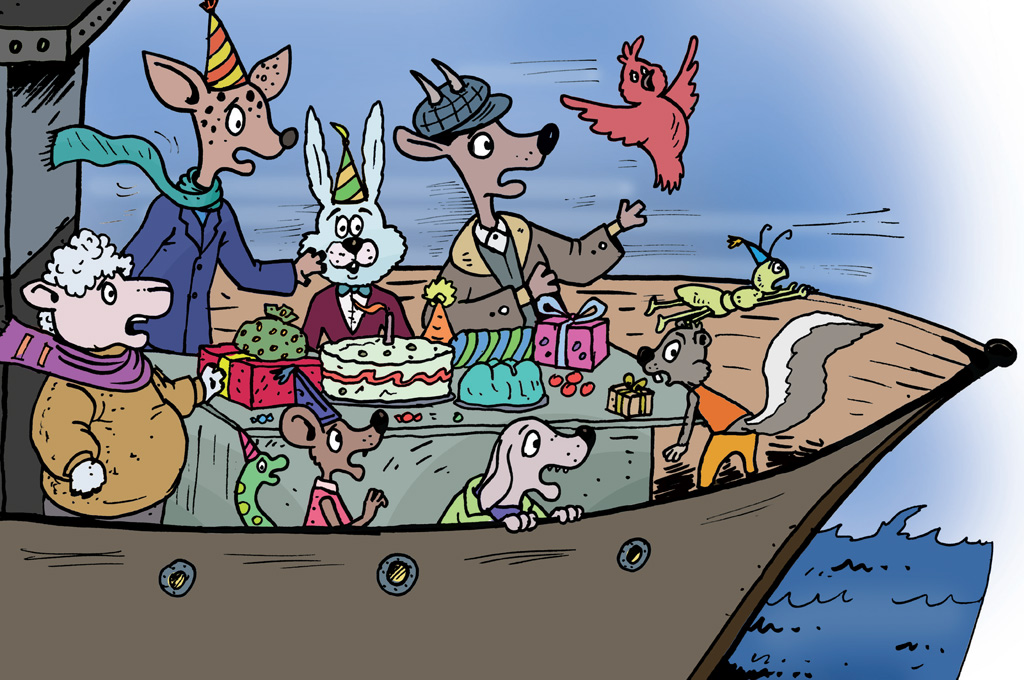 Dina, the deer decided to organise her birthday party on a ferry. She hired a ferry and invited all her friends.

It was a bright and sunny day when they set sail. Everyone on board was having a good time. When Dina was about to cut the cake, the ferry rocked, throwing everybody off balance.

The wind had suddenly picked up speed and was creating strong currents and big waves.

Spot, the deer, who was the captain of the ferry, was trying to control the ferry. From his cabin, he sounded the emergency alarm. “There is going to be a lot of turbulence! Please be alert and safe! I request everybody to wear their life jackets,” he announced.

Ricky, the rabbit ran to Captain Spot and asked, “What is wrong, Captain?”

“The ferry is out of control. The currents are too strong and I’m unable to steer the ferry. If this continues we may have to abandon the ferry,” said Captain Spot.

“Don’t worry, Captain. Please control the ferry as best as you can. I will try to come up with a plan,” said Ricky.

Ricky ran back to the deck. Everyone was scared. Ricky calmed them down. He then looked out to the sea with a pair of binoculars. There was no sign of land nearby but he spotted a school of dolphins. He quickly signalled to them by waving a red flag. Ricky hoped that his friend Dolly, the dolphin would be among them.

A few months ago, Dolly had washed up on the shore because of high tide. She was stuck on the beach, unable to get back into the water. Ricky and his friend Elna, the elephant had happened to see Dolly while walking on the beach.

They pushed her back into the sea. Since that incident, Dolly had become good friends with Ricky and Elna.

The dolphins saw Ricky waving for help and rushed towards the ferry.

“Hey, Ricky! Are you in trouble? What happened?” asked Dolly.

Ricky told her about the problem.

“Don’t worry, Ricky. My friends and I will help keep the ferry stable and we’ll steer

it towards the closest island for now,” she said.

“Thank you, Dolly!” said a relieved Ricky. He rushed to inform Captain Spot about

With the help of Dolly and her friends, Captain Spot was able to steer the ferry towards an island. Everyone got off the ferry.

Captain Spot checked the ferry and said, “Oh no! The engine requires some repair and the compass is broken! How will we return home?”

Dina began to cry. “This is my fault! If I hadn’t insisted on celebrating my birthday on a ferry, we wouldn’t be stranded on this island.”

“It’s nobody’s fault, Dina. We’ll come up with a plan,” said Ricky reassuringly. He then turned to Captain Spot and said, “Captain, please try to fix the ferry’s engine. I’ll speak to Dolly and see if she can help us.”

“This is not a problem. Whenever the ferry is ready, just let us know. We’ll guide

the ferry back to your home. We know the way. We don’t need a compass,” said Dolly.

Captain Spot was able to repair the ferry’s engine. All the passengers boarded the ferry again. Dolly and her friends swam ahead, showing the way. Finally, the ferry reached home safely. Everybody thanked the dolphins.

“If it weren’t for you, we would have been stranded. Thank you, Dolly!” said Ricky.

“Yes. Thanks to you, my birthday party can continue. I would like to invite you and your friends to join us,” said Dina.

Dolly and her friends happily agreed. Everyone had a good time at the party.