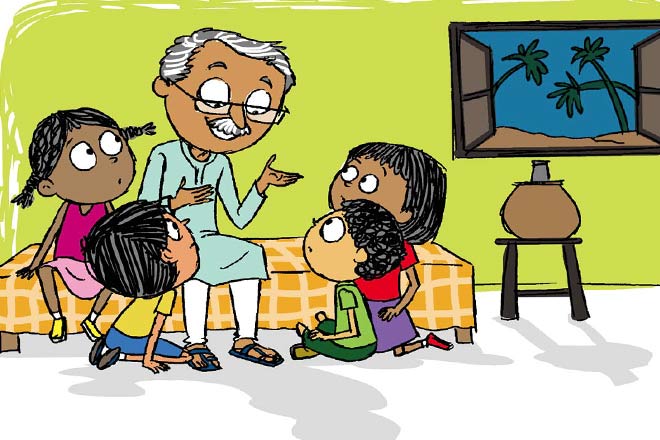 Nikhil and Neelu could meet their cousins Alekhya and Anirudh only once a year at their family home during the winter vacations. They would really look forward to meeting them!

Nikhil’s family would come down from Mumbai and Alekhya’s would arrive
from Hyderabad. They would meet every winter in Penupuram, a village deep in the interiors of Andhra Pradesh.

The holidays were a glorious period of about twenty days for the kids. There were no studies, no homework, no special classes, no assignments. They would just eat, sleep, and play in their grandfather’s mango orchard. In the evenings, they would listen to the stories narrated by Tatagaru (Grandpa) while munching on snacks made by Bamma (Grandma).

One evening Tatagaru said, “Children, today I am going to tell you the story of the ghost of Penupuram.”

“Oh Tatagaru, we were not even born then,” said Anirudh.

“Even your parents were not born, children,” said Tatagaru, laughing.

”And my father was born in 1979,” said Alekhya, not wanting to be left behind.

“Well children, I was about fifteen years then. In those days we did not have buses or taxis to go to the nearest town. We either had to go on a bullock cart or a bicycle.

One night my father fell ill. My mother was very worried. My brother and sister had gone to a nearby village to attend a wedding. I was unwell, so I could not go.

Mother started crying. It was ten o’clock at night. All our neighbours had gone to sleep. The nearest town, Tenali, was about an hour away, on a bicycle.

With a severe cold, I decided to cycle to Tenali, to get our family doctor.

My mother went to my friend Bheem’s house to request him to give me company because I was not well.

Bheem was a very close friend of mine, who lived two houses away. He would boast about fighting robbers single-handedly, killing venomous snakes, controlling bulls and many other feats which many people would not even think about doing. I had a feeling that he was a big braggart but I could never prove that he had not done what he said.

My mother believed all his stories, so maybe that’s why she wanted him to accompany me on the dark country road.

Bheem came over to my house. He had been awake but did not seem very eager to give me company on the pitch-dark road. When he saw my father struggling to breathe, without saying anything, he agreed to ride the cycle and I sat behind him.

We started out on our journey. There were no street lights. Bheem started showing off again.

“Nothing scares me. I can fight any wild animal,” said Bheem. But as we rode along, his confidence seemed to fade. We were talking and joking to prove to each other that we were not afraid, but in reality, we were very trembling with fear.

Halfway through, we reached a dried up well. Bheem told me that people had strange experiences like hearing the sound of payal and dancing steps. He declared loudly that he was not afraid of ghosts but suddenly became quiet.

I also started feeling a little uneasy because suddenly we heard a tinkling sound. It was not the sound of payal which would also be scary in such a place. It was the loud sound of ghungroos! The sound was now coming closer to us.
Bheem stopped the cycle.

“Wha… what happened?” I asked nervously.

“I don’t know. The cycle is not moving… and I can’t see anything,” said Bheem. He was shaking like a leaf. I could feel his body rattling. We left the bicycle and ran. The tinkling sound followed us.”

Neelu moved closer to Tatagaru. She grabbed Tatagaru’s hand was getting scared. Anirudh started teasing her.

“It is only a story, silly,” said Anirudh.

“But it happened to Tatagaru and his friend,” said Neelu, clinging on to Tatagaru’s arm.

Grandfather did not smile but continued. “We ran at lightning speed. We were running blindly on the dark road. Suddenly Bheem screamed, “Aaaaaaaaargh … Someone pushed me aaaaaaaaagh!” I was so scared I did not know what to do. We kept running in the general direction of the town. And then, something hit me on my back. I scream­ the loudest I had done in my life, and fell forward. The sound of bells was still coming from behind us. After that we don’t remember what happened to us.

When we opened our eyes, we were in Dr. Rao’s house. A lady was massaging our foreheads and backs. Somebody offered us hot milk. We drank without any hesitation.

After a few minutes, the doctor said “Yes, young men. Now tell me the entire story.”

We narrated the entire story. We were still feeling very nervous. The doctor asked Bheem, “So young man, whose ghost was it?”

“I do not know sir, but people say it is the ghost of a young woman who died recently,” said Bheem.

“Look here,” the doctor said. “I have been living here for the past 45 years and I have not seen any ghosts. As far as I know, no young woman has died. I am a doctor so I should know.”

“Then those bells?” I asked, still nervous.

Dr. Rao took us to the verandah. “There is your ghost,” he said pointing to a playful bull-calf tied to a tree. He was covered with bells and beads and was grazing on some dry grass which Dr. Rao’s servants had put for him. Dr. Rao continued ”At about eleven o’clock, I heard some sounds. I came out and saw the two of you lying on my doorstep talking that a ghost was chasing you and wanted to kill you. So, we got you inside and you know the rest of the story,” he said smiling.

Dr. Rao said, “Boys, there are no such things as ghosts and ghouls. People just imagine them. All such experiences can be explained. This poor calf was probably separated from its herd. Tomorrow we will know who his owner is.

Actually, this is not the first time that cattle is lost in that area. When these animals see human beings, they run behind them.”

More From Champak: The Sugarcane Ghost

Dr. Rao drove us back in his jeep. On the way, we found our bicycle. One of its tyres got punctured. We now understood why it had stopped last night! Dr. Rao helped us put it in the jeep.

My father soon became better. The doctor said it was just an allergy. Mother thanked him with tears in her eyes. The doctor was an old family friend. He asked us not to worry. But a great change came over Bheem. From that day onwards, he never talked about his brave adventures.”

Tataguru took a deep breath as he finished the story.

“Oh Tatagaru, what a great story!” clapped the children.