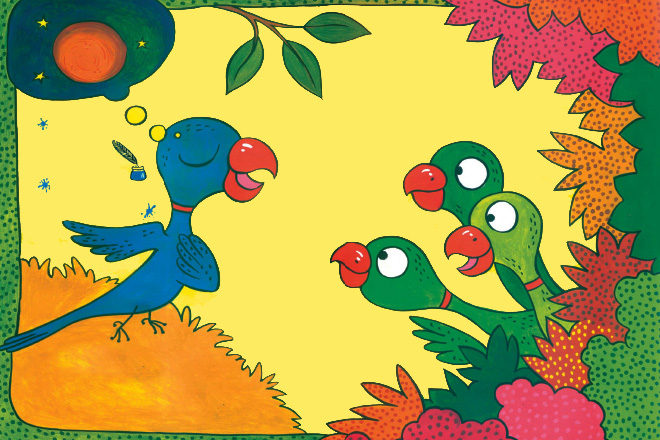 “You keep sitting idly all the time. No wonder you have become such a prankster. Why don’t you do something constructive with your life?” One day Tenten’s friends advised him to seek work and Tenten agreed.

He loitered around the jungle the entire day. It was almost dusk now. As Tenten began to return home, he felt thirsty. Whitey Rabbit was writing something by dipping his pen in the inkpot.

As Tenten descended to drink water, his wings bumped the inkpot and ink got on his body. Blue spots developed on his green body.

He began crying and rolling on the ground. The ink which had fallen on the ground made his body completely blue. When Tenten reached back, nobody could recognize him.

“Hey look, a blue-colored parrot! Maybe he has come from a different planet.” The parrots sitting on a tree noticed Tenten’s unusual colour.

“They can’t recognise me. I should take advantage of their ignorance,” Tenten thought “You are right. I have come from Mars and my name is Neelu,” he said.

“Our friend Tenten is not to be found from yesterday. Do you have any idea where could have he gone?” the parrots asked.

“I had seen him go towards Mars. Maybe he has stayed there itself,” Tenten replied, laughing inwardly. “He might not come back again.”

“One doesn’t have to work there. You get everything without sweating. It’s a fun place to be,” Tenten boasted.

“We too want to go there. Will you help us in that?” The parrots became desperate.

“Yes, why not, but only 4-5 parrots can go there, not everybody. Only those, whom I will like, will get a chance to go to Mars,” Tenten said.

After that day, all the parrots began competing to serve Tenten. In a bid to go to Mars, they agreed on anything he would say. In a way, he had become like their king. They would be always ready to fulfill any wish of his.

“Brother, when will you take us to Mars?” After serving Tenten for many days, the patience of the parrots was now wearing out.

“Wait for some more time. I’ll definitely do that as soon as the time comes,” Tenten dodged their demand. That made them quiet.

It had not rained in Sundarvan for quite some time now. All the inhabitants were extremely restless because of the scorching heat.

“You have come from Mars. At least tell us when will it rain in Sundarvan?” All the animals and birds came to Tenten for help.

“Rain? It will definitely rain day after tomorrow,” Tenten replied looking towards the sky. Everybody became very happy.

Fortunately, the sky became overcast on the third day. It started to rain after a short while. The animals, who had been waiting for the rain for a long time, danced in happiness.

Everybody thanked Neelu; they thought he had brought the rains. They made him sit in the center and danced around him, gleefully. Tenten too couldn’t stop himself. He spread out his wings and began enjoying the cool raindrops on his body.

He had forgotten all about the ink. As soon as he got wet, the ink washed off by the rainwater. After a while, the entire blue colour had gotten cleaned and he was back to his normal self.

“Hey Tenten, when did you come back?” When the parrots found their lost friend amidst them, they were delighted.

“It seems they haven’t recognized me,” Tenten thought and said, “I have just returned from Mars. It doesn’t rain over there. When I saw that it was raining in Sundarvan, I couldn’t stop myself and left all the luxuries to be here.”

“You did a sensible thing, Tenten,” they all chorused happily. “We too don’t want to stay at a place where it doesn’t rain.

“Where is Neelu Parrot?” Tenten asked the parrots. They realized that he was not amidst them and began searching for him. But how could they have found him when he was not there?

“I think he had come to give us rains and has gone back now. Whatever, but he was a kind parrot. We’ll miss him,” the parrots said simultaneously.

Tenten smiled at their innocence. His eyes welled with tears at their love. I’ll never ever bother them again and will live amongst them, working hard to sustain my life.” He made this resolution to himself and decided on following it.