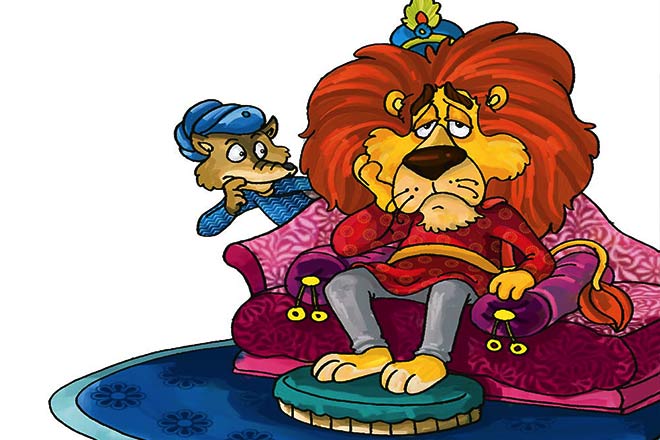 King Sher Singh was generally very cheerful. But there were days when he turned sad and irritable. This usually happened when he remembered his old friend Ramu Singh.

King Sher Singh would grow so miserable that he would even forget to eat his meals and lose interest in important matters.

“Ramu, my friend,” he would murmur in his sleep. “Where have you gone? Please come back and forgive me.” King Sher Singh would then wake up with a jolt and start crying softly

On days like that, King Sher Singh would even stop coming to his court. He would keep to himself and sometimes even neglect urgent official matters. His ministers and Queen Sherni would grow worried, for they knew that King Sher Singh couldn’t afford to neglect his kingly duties. But they couldn’t do much and they would patiently wait till he felt better.

But of late, Minister Chatur Jackal had noticed that King Sher Singh’s bouts of sadness were lasting for very long. And that, they were not only was affecting his duties as a king, but also his health.

Chatur Jackal couldn’t stop himself from going up to King Sher Singh. He was very concerned about him.

“I don’t mean to be inquisitive but may I ask what exactly makes you so upset sometimes? Why don’t you share your worries with me? You’ll feel much better if you do. And who knows, I might just be able to help you solve your problem.” King Sher Singh trusted Chatur Jackal and thought of him as a friend. And so, he decided to share his problem with him.

“Well, Chatur,” King Sher Singh said as a few tears rolled down his eyes. “I had a very dear friend in my childhood. His name was Ramu Singh. He was my best friend. We played games and studied together everyday. But one day, we had an argument. I lost my temper and said some very harsh things to my friend. Ramu Singh was hurt. He left the forest without telling anyone where he was going. I think of him sometimes and wonder where he went. How I wish that we were still friends.”

“Oh!” Chatur Jackal said to himself after hearing King Sher Singh’s story. “So, King Sher Singh is missing his old friend. Well, it is indeed sad. But he isn’t doing anything about it. There are many animals and birds in Champakvan who have been separated from their parents, siblings and children. I should introduce King Sher Singh to them and tell him what they do.”

Chatur Jackal then listed out the names of some of the animals who had been separated from their loved ones.

“Blacky Bear was lost when he was just a cub,” Chatur Jackal recalled as he noted the names down. “He has been looking for his parents ever since then. And Roopi Deer’s son had been kidnapped by Kalu Jackal a long time ago. She hasn’t given up hope and is still searching for him.”

Chatur Jackal then took King Sher Singh to meet Blacky Bear and Roopi Deer. After hearing their stories, King Sher Singh realised that he was not the only one who had lost someone he cared about. There were others too. But unlike him, they were working hard to find them.

King Sher Singh decided that he too would look for his long-lost friend. He then sent his soldiers to look for Ramu Singh.

“Go to all the rivers, mountains, fields, forests and lakes in the land!” he ordered. “Leave no stone unturned. You must find Ramu Singh.”

And so, the soldiers did as they were told. But they didn’t find Ramu Singh anywhere. King Sher Singh didn’t lose heart. Instead, he joined his soldiers in the search.

One day, King Sher Singh came across a rocky hill covered by trees. He noticed the marks of a lion’s paws on the ground.

“Hmm,” he wondered. “Could my long-lost friend be here?” King Sher Singh then ordered his soldiers to search the entire area thoroughly.

The soldiers soon spotted a lion sitting outside a small cave. He was dressing the wounds of some injured birds and animals. They went and told King Sher Singh about it.

King Sher Singh recalled how his friend Ramu Singh had always wanted to be a doctor. “Could that be Ramu Singh?” he said hopefully. He then ran to the cave.

King Sher Singh’s happiness knew no bounds when recognised the lion sitting there. Yes, he was his friend Ramu Singh.

“At last! There’s my long-lost friend,” he said to himself. “I can’t wait to talk to him!” King Sher Singh started to walk towards Ramu Singh. But then he hesitated and stopped mid-way. He remembered the last time they had met, and the harsh words that he had spoken. Chatur Jackal, who had accompanied King Sher Singh, understood his dilemma.

“Go on, Your Majesty!” he said and encouraged King Sher Singh to go further. “You have been waiting for this moment since very long!” King Sher Singh nodded and slowly walked towards Ramu Singh. Ramu Singh looked up and wondered who, dressed in royal attire, was coming to meet him. Soon, the two friends had tears in their eyes. “I wish I hadn’t been so harsh, Ramu,” King Sher Singh said. “Please forgive me.”

“And I wish I hadn’t walked away in a huff and not kept in touch,” Ramu Singh said. “I’m sorry too.” The two friends then sat together and laughed and talked happily. Chatur Jackal and the soldiers were happy to see King Sher Singh look so cheerful once again.

“Your Majesty,” Chatur Jackal told King Sher Singh later that day. “Don’t you wish that you had looked for Ramu Singh right after he left, and apologised immediately?”

“I wish I had,” King Sher Singh said. “Had I done that, I wouldn’t have felt so miserable for so many years.”

After that, King Sher Singh never felt gloomy or irritable again. He didn’t neglect his duties either. He now understood that any misunderstanding in a friendship should be sorted immediately. He stayed in touch with Ramu Singh and was careful not to lose his temper or say anything that was harsh again. He didn’t want to lose his friend again.