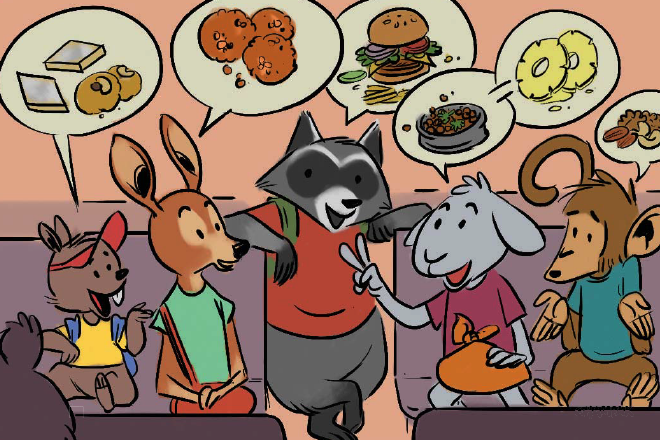 Tippy, the squirrel, Dina, the deer, Roco, the racoon, Lanny, the lamb and Chimp, the monkey were travelling in the school bus together. They were on their way to a picnic near the stream along with their teacher, Giro, the giraffe. They had brought along their favourite snacks and games.

“My mother has given me sweets made of dry fruits,” said Tippy excitedly to his classmates.

“I’ve got burgers!” Roco pitched in.

Dina had brought laddoos made by her grandmother while Lanny had popcorn and pineapple slices.

“Chimp, what have you got?” asked Tippy.

“My parents have gone out of town to visit my grandmother, so I have just brought along some nuts that I found in the house,” replied Chimp.

Soon, the bus reached the picnic spot and they all got off. Giro spread out a mat and asked all the children to put down their bags on it. Then they all rushed to the stream nearby and started playing games.

After a while, Chimp felt thirsty. He excused himself and went to the spot where all their bags were kept to drink water. He joined them again and continued playing.

Feeling quite hungry, the children quickly sat on the mat as instructed by their teacher, and opened their lunch boxes. When Lanny opened his box, he was shocked to find it empty! “Where have my pineapple slices gone?” he wondered aloud.

“Maybe your mother forgot to pack them,” said Chimp. “Don’t worry. I’ve got some pineapples too. You can share with me.”

“But you said you have only got some nuts!” exclaimed Lanny surprised.

“Yes, but I can climb trees, remember? I spotted a pineapple tree nearby and plucked one from there,” replied Chimp.

Giro who was listening to the conversation asked, “So you climbed a tree and plucked the pineapple, did you? Then how did you peel it?”

“I peeled it just like how one peels a banana,” replied Chimp.

More From Champak: The Egg Thief

“But sir, these are mine,” said Chimp.

“Stop lying and confess to what you did. Else, I will have to complain to your parents,” said Giro.

Chimp was scared. “Please don’t tell my parents, sir,” he said nervously. “I stole the pineapples from Lanny’s box.”

“But why did you do that?” asked Roco surprised by his confession. “I had never eaten pineapples before but had heard that they are very tasty. When Lanny said that he had brought some, I wanted to try them but was embarrassed to ask. So I decided to steal them,” explained Chimp.

“But weren’t you with us the whole time?” wondered Dina.

More From Champak:  A Thief of Champakvan

“While we were playing by the stream, I made an excuse of being thirsty and came here alone. I used the chance to empty Lanny’s pineapples into my own box,”” revealed Chimp.

“But you could have just asked me, Chimp. I would have happily shared them with you. There is no need to be embarrassed when among friends,” said Lanny. Chimp was ashamed of himself. “Please forgive me. I have made a mistake,” he said in a low voice.

“I hope you have learnt your lesson, Chimp. It is never okay to steal,” said Giro.

“But sir, how did you figure out that Chimp was lying?’ asked Dina.

“Because Chimp’s knowledge of pineapples is poor. First of all, pineapples don’t grow on trees; they grow on the ground. Their leaves are thorny and the skin is very rough, so they cannot be peeled with bare hands like a banana. You have to peel them using a knife,” explained Giro.

“It’s okay, Chimp. Next time you need something, just ask us. We are all friends after all,” said Lanny smiling and offered Chimp some pineapple slices. All the friends shared their food and had a hearty picnic lunch.