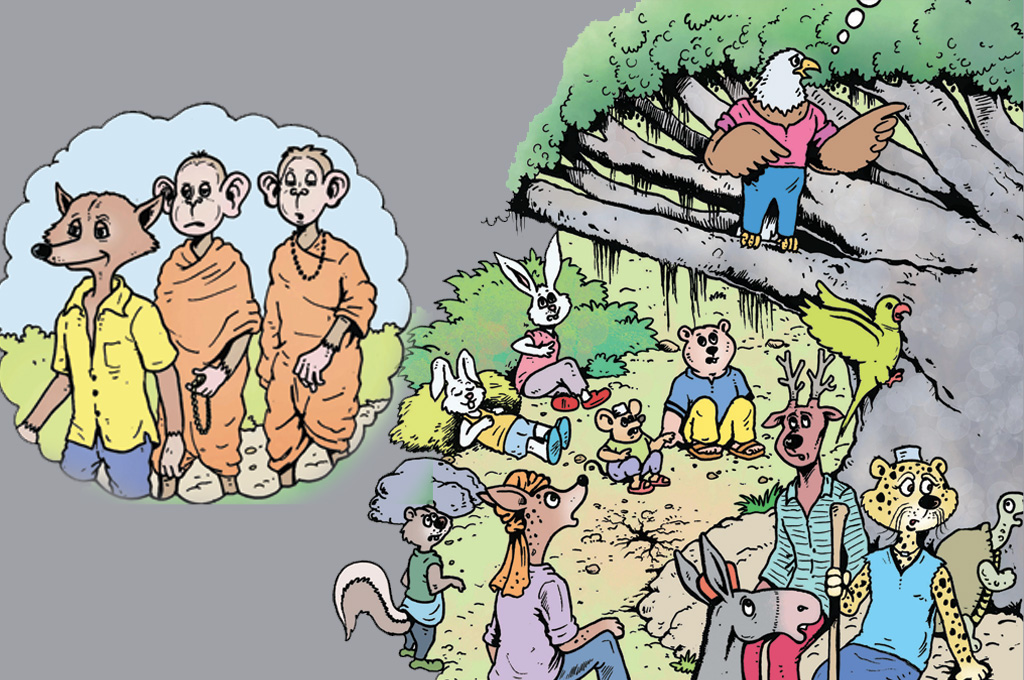 All the animals of the forest of Doodlevan were worried about the late arrival of monsoon. The pond had dried up, so they had to go far in search of water. Every day, all the animals and birds would gather around the biggest banyan tree, looking up at the sky for any sign of rain.

One day, Loki, the eagle informed the animals that he saw Jacky, the jackal walking towards Doodlevan with two monkeys who looked like babas.

“Why are they coming here?” asked Popo, the parrot.

“To make it rain in our forest,” said Loki.

“Who told you?” asked Eddie, the elephant.

“Jacky told me. They are all well-known babas. After they perform a special pooja here, it will begin to rain and all our worries will be over,” replied Loki.

“I don’t believe it,” said Charlie, the rabbit.

“This seems suspicious. This could be a trick. These monkeys will rob everyone and escape from the forest,” said Charlie.

“How do you know?” asked Loki. “I believe these babas can do anything. They have divine powers.”

“So, let them make it rain wherever they are. We didn’t ask for it,” said Charlie.

“Come on, Charlie. It is just a pooja. Everyone believes it will rain after the pooja,” said Loki.

“Yes, even King Leo, the lion believes it. That’s why he has asked me to inform everyone about it. The pooja will start tomorrow itself.”

“What?!” exclaimed Charlie and Miko.

“There is nothing to be surprised about,” said Loki, flying away to tell others.

By evening, the news had spread throughout the jungle. Jacky and the two babas, Chimpu baba and Chiko baba, began preparing for the pooja.

“Chimpu baba is always in meditation and does not like to be disturbed. It was only on Jacky’s request that he agreed to come to Doodlevan to

“It is very kind of him. If the monsoonis delayed anymore, we’ll all be forced to move out of this forest,” said Loki.

“It has not rained here because the values

of honesty and justice are not followed. This has displeased the gods. That is why the clouds have changed their path,” said Chiko baba.

“You are right,” said Loki.

“Now, we will need different items for the pooja. A feast must be organised after it pooja,” said Chiko baba.

“That depends on your devotion. The more gifts you give Chimpu baba, the more you will benefit. Though Chimpu baba wishes well for everyone, the one who gifts him the most will receive special blessings,” explained Chiko baba.

Charlie listened to the conversation from a distance. He called Miko and asked him to keep an eye on Chimpu baba.

“But why do you not trust the babas?” asked Miko.

“My friend in Riddlevan told me that a couple of months ago, two notorious monkeys cheated many animals in their forest by selling fake gold bars. Once the animals complained to the police, the monkeys vanished. The police are still looking for them. So, I have a suspicion that these two babas could be those monkeys in disguise,” explained Charlie.

Charlie went to talk to Boko, the bear about his suspicion. Since Boko worked for King Leo, he would be able to alert him.

“Are you sure?” asked Boko.

“Yes. Look here,” said Charlie, showing Boko a photo on his phone. “My friend just sent me the photos of the two monkeys wanted by the police at Riddlevan. Don’t they look like Chimpu baba and Chiko baba? We need to arrest them.”

“But what about the pooja? What if it does rain after it?” asked Boko.

“Boko, delayed monsoon has got nothing to do with angry gods wanting to be pleased. It is to do with us mindlessly cutting trees and using up groundwater. We must harvest rainwater, plant more trees and use water sensibly,” said Charlie.

“You’re right. We need to stop these monkeys before they cheat us. I think Jacky too is involved. I’m going to inform Inspector Giro, the giraffe right away,” said Boko.

As soon as Jacky, Chimpu baba and Chiko baba saw the police, they tried to escape but Inspector Giro managed to catch them.

The other animals were surprised. Boko then explained everything to them. Everyone thanked Charlie for his alertness.

“Now I hope everyone has understood that we cannot make it rain by performing some pooja but only by planting trees and harvesting rainwater,” said Charlie.