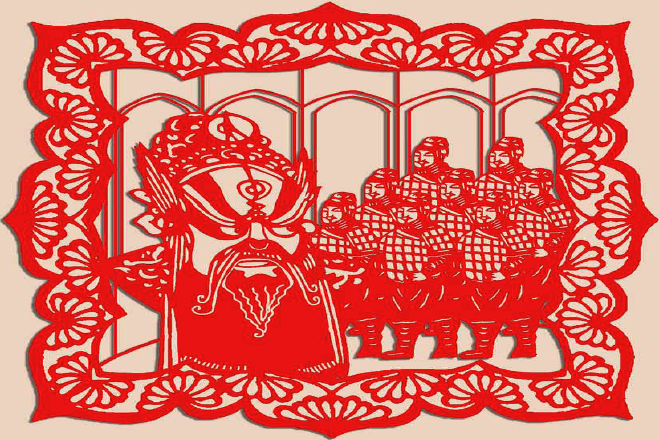 There was once a king in ancient China. He was a very cruel king and would punish his subjects for the slightest of mistakes. The punishments were extraordinarily cruel and he would take great pleasure in delivering them. Many of his ministers tried advising him against such punishments, but he never listened.

One day, one of his ministers suggested that he should expand the size of his kingdom. This seemed like a good idea to the king and called for an army to be put together. Soon, the army was ready and all the soldiers were well built, strong men. The king marched his army straight into his neighbouring kingdom.

The sheer size of the army was enough for the neighbouring king to surrender.

In exchange for peace, the king also offered him his soldiers and a lot of wealth. It was the same story is many other kingdoms and the king grew even more powerful. One of the king who had surrendered suggested that the king conquer India. India was a land of wealth and the king was very tempted to gain control. So, he marched his soldiers all the way across China. They stopped at what is now modern day Singapore. From the coast, the king’s troops set sail across the waters, in search of India.

News of the impending attack reached the ears of the Indian king. He had heard about the size of the Chinese army and knew that he wouldn’t stand a chance against them. Hence, he gathered all the scholars and economists in his kingdom and asked them to think of a plan.

The scholars and economists thought about and discussed their plans for several days until they had the perfect plan.

When the plan was narrated to the king, he was pleased and gave orders to carry out the plan. This, in a few days, a huge ship reached the coast of Singapore. As soon as it arrived, it was captured by the Chinese king’s troops.

When it was discovered that the vessel was from India, they crew were presented to the king. A third pulled out a dried up piece of fruit and said that when they had set sail, he had planted a seed. He went on to explain that over the years, the seeds had grown up and borne fruit too, All they had left was a Nihil fruit from the second tree. The king was shocked to learn that the journey to India was full of so much trouble and would take so long. He realised that by the time his troops landed on Indian shore, they’d no longer be fit for a fight.

The Chinese king immediately canceled his plans and ordered his troops to march back to China and also gave the sailors lots of money and restocked their ship so that they would be comfortable in their old age. Thus, a few intelligent people defeated an entire of army with just their brains.

A  lot can be achieved by not giving in to fear, and thinking with a cool mind and a little imagination.