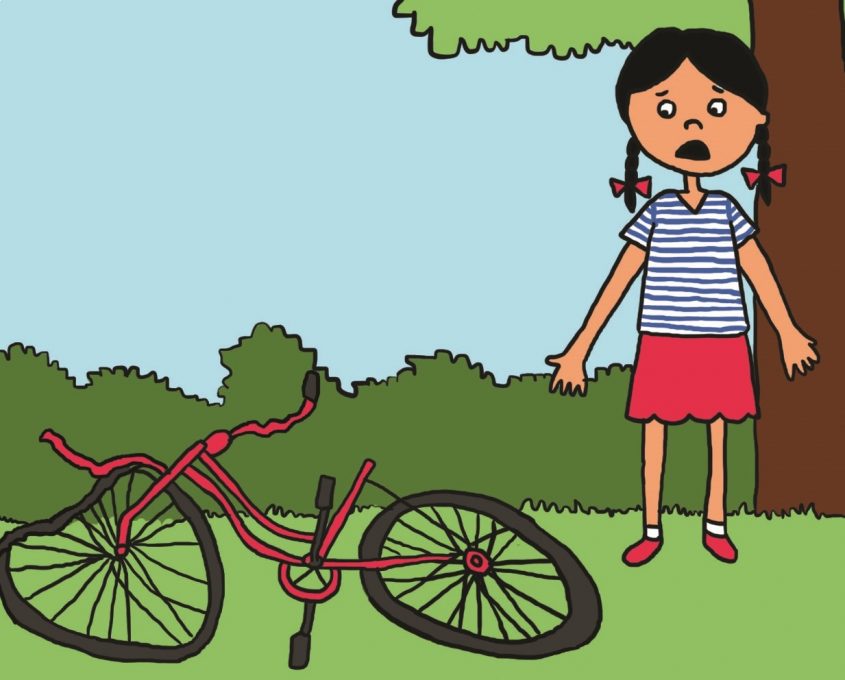 It was Triveni’s birthday. She was eagerly looking forward to her birthday party which would be attended by all her friends and neighbours. That evening around 7 p.m., Triveni cut the cake, while everyone sang “Happy Birthday”.

Later, when the party was over and all the guests had left, Triveni went through her gifts.

“Wow! So many gifts!” said Triveni excitedly as she opened one.

“I have a surprise for you. Come outside and take a look,” said Triveni’s father. “A surprise!” exclaimed Triveni and ran out excitedly.

She was greeted by the sight of a shiny new red bicycle parked outside.

“Wow! A bicycle! Thank you so much, papa,” said Triveni hugging him.

“Now you will have to learn how to ride it. How about I teach you from tomorrow?” asked her father.

Next morning, Triveni went to the neighbourhood park with her father where he taught her how to ride the bicycle. From that day on, she practiced every day with his help.

One evening, Triveni was anxiously waiting for her father to come back from office. She wanted to show him that she now could ride without his help. When Triveni’s father finally came, she ran up to him and said, “Papa, let’s go to the park. I want to ride my bicycle.”

“Sorry, dear. I’ve had a hectic day and I am feeling very tired. I’ll surely come with you tomorrow,” he said.

Triveni was upset but she could see that her father was really tired. “I guess I will take my bicycle to the park on my own and practice,” she told herself.

While riding her bicycle at the park, a dog suddenly ran past causing her to lose her balance and ultimately crashing into a tree. Although she wasn’t hurt, the bicycle’s front wheel was damaged. And when she tried to push it, the wheel made a strange, creaking noise.

“Oh no! My bicycle is damaged! If papa comes to know, he’ll be angry that I damaged the new cycle!” panicked Triveni.  “I will hide it inside the garage and get it repaired tomorrow before he finds out,” she thought.

With much difficulty, Triveni managed to park her bicycle inside the garage. Though she tried her best to keep it from making a noise, it let out a squeak once in a while. She hoped her parents didn’t hear it. She then quietly sneaked inside the house, had dinner and went off to sleep.

In the middle of the night, Triveni and her parents were woken up by a strange sound outside their home.

“What is that?” asked her father puzzled.

“Papa, that’s the sound of my bicycle,” said Triveni. They immediately rushed out to see some of their neighbours standing around a stranger. One of them was holding Triveni’s bicycle.

“Hey, that’s my bicycle! Why is it outside?” asked Triveni.

“This man here was walking away with it. We caught hold of him and we have informed the police too. They will be here soon,” said one of the neighbours.

“Thank you so much everyone. But why was the bicycle making so much noise?” asked Triveni’s father.

That’s when Triveni confessed to having crashed the bicycle into a tree and damaging it. She also told him how she hid the bicycle in the garage hoping to get it fixed before he could find out. Triveni’s face beamed and she no longer felt bad about her bicycle.