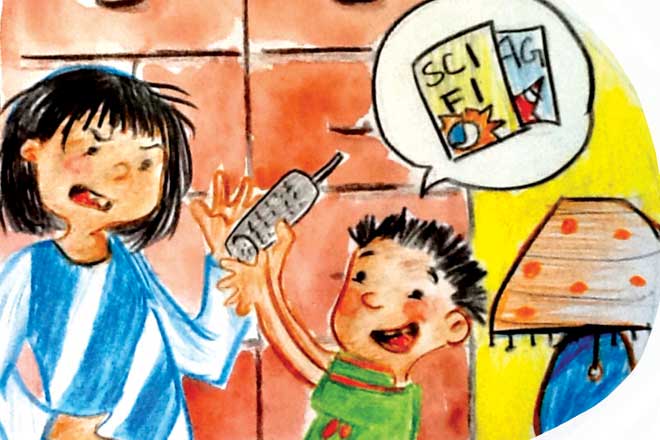 When the phone rang, both Monu and Renu ran to attend it, but Renu reached it first. “Hello! Dad, have you reached Tokyo? Yes, I’ll tell mom,” she spoke to her father who was travelling to Japan for work.

“I want to talk to him. Give me the phone!” Monu tried to snatch the phone from Renu.

“Take it, you little brat!” said Renu with irritation. “Hello! Dad? Please buy me lots of science-fiction comics and also the new Alien Wars video game,” said Monu. He then put down the phone with a satisfied smile.

Renu frowned. “Dad has gone to Japan on work; not for your science-fiction shopping,” she told Monu.

“Don’t worry, I’ve asked Dad to buy you a doll,” replied Monu with a wink and ran to his room. Renu ran after him, shouting, “How dare you…you know I don’t like dolls!”

This was the usual banter between 11-year-old Monu and his sister Renu, who was five years older to him.

The Aliens Are Coming!

Later that evening, when their mother returned from work, Renu told her about their father’s phone call.

“Dad has reached Tokyo safely,” Renu told her mother. “And Monu is reading a science-fiction comic again,” she said, pointing to her brother who was reading a magazine oblivious to his surroundings.

“Monu, you should also pay attention to school work; you need to be regular with it or you will find it difficult,” explained Mom.

“Mom, these comics are based on Science; I learn a lot from them,” Monu replied.

The following day was a Saturday. Mom unexpectedly received a call from her office and had to go.

“I have an important meeting. I’ll be back by evening. Please take care of your brother till then,” Mom told Renu.

“But Mom, I’ve got my school play rehearsal today,” said Renu. “And Monu is old enough to take care of himself.”

“I don’t want you to leave him alone at home. Please cancel your rehearsal and stay back with him,” said Mom and left for the meeting.

Renu paced back and forth. Suddenly, her eyes lit up. She dialled a number on her mobile phone.

“Hello! Vasu, listen…” she whispered on the phone. Monu became alert. He tried to listen but Renu closed the door to her room.

After some time, Renu came out and told Monu, “I am going to my rehearsal. A friend will come over shortly to take care of you. Lock the door after me.”

“Hmm! Seems like my evil sister is up to something,” thought Monu. He forgot to close the door.

Meanwhile, in the next street, Chappu, the thief had snatched a woman’s purse and was now being chased by a policeman. As he was running, he saw the door to Monu’s house wide open. “I better hide in there till the policeman goes away,” he thought to himself.

“Hey! Who are you and what are you doing here?” asked Monu upon seeing Chappu.

The thief was taken by surprise.

“Hmmm… He must be Renu’s friend Vasu. Very well then, I’ll show him what I can do,” thought Monu with a stifled grin. “Hello! You must be Mr. Alien from planet Xoxo,” he said to Chappu.

“Why is that boy talking weirdly?” wondered Chappu. “Since the policeman is still outside, I better play along,” he thought.

Monu tried hard not to laugh.

“Of course, you are. Please sit down. I’ll get you something to drink,” said Monu and went into the kitchen.

“What luck! It looks like this boy is alone at home. I’ll wait here till the policeman goes away and then escape with a few valuables from this house too,” decided Chappu, suddenly feeling happy.

Monu returned and offered him a green drink. As soon as Chappu took a sip, he spat it. “What is this? It’s horrible!” he said. “That’s the favourite drink of people from your planet— the juice of bitter gourd,” Monu replied innocently. “Come on, now don’t be shy; drink it up,” saying this, Monu made Chappu finish the entire glass.

Then Monu brought out his mathematics book and started asking questions which Chappu failed to answer.

“Hmmm… I think you are not adjusted to Earth’s environment yet. You need some exercise,” saying that, Monu took Chappu up to his room and made him clean it. Since the policemen were still patrolling the streets, Chappu went along with Monu’s whims and cleaned up the room. By the end of it, Chappu was very tired.

“If I stay here any longer, this boy will make me do the dishes and wash the clothes too,” he thought.

“I think you are fully active now,” Monu said to him. “Time for some science questions…let me get my book.”

Chappy moaned in horror. Fortunately for him, just then, the doorbell rang and Monu went to answer it.

Seizing the opportunity, Chappu pocketed some watches and other valuables and looked for a window to escape from. At that time, Monu was talking to a girl at the door. “How can your name be Vasu? You are a girl!” he said puzzled “My name is Vasudha—Vasu for short, and I’ve been requested by your sister to babysit you till she returns,” said the girl.

“Oh! Then I wonder who that other person is!” said Monu running to his room.

By then, Chappu had jumped out of a window and was running through the street.

“Hey! Mr. Alien, please wait. I am sorry! Please come back,” Monu ran after him.

When Chappu saw Monu, he started running faster. Chappu spotted the policeman at the end of the street and ran towards him.

“Sir, please save me from this boy. Please arrest me and take me with you!” Chappu pleaded with the policeman.

Monu reached them, panting heavily. “Why are you handcuffing him?” Monu asked the policeman.

“Because he is a notorious thief and thanks to you we have caught him,” replied policeman said.

“Yes. And I think these belong to you,” said the policeman, handing over the things that Chappu had stolen from Monu’s house. “Come to the police station tomorrow and collect your cash prize.”

By the time, Mom and Renu also reached the spot as they had returned home and Vasu had told them that Monu was out.

“Didn’t I tell you not to leave him alone?” Mom scolded Renu. “A thief tried to break into our house. What would have happened had the policeman not reached on time?”

Monu tried to act cool. “It’s okay, Mom. You have a grown up son now. See how cleverly I handled the thief!”

While Mom was talking to the policeman, Renu dragged him alone and said, “Vasu told me that you chased after the man shouting ‘Wait, Mr. Alien’. Shall I tell Mom? Because, I think I have a clear idea as to what exactly happened.” “And you have to promise me that you’ll stop obsessing over science-fiction. Just read the books and enjoy; don’t get addicted to them,” Renu advised him.

“Oh! Don’t worry about that. Sci-fi is over. I am now ‘Monu, the detective’. I’ll read only detective books from now on,” said Monu.

Renu rolled her eyes and said, “This boy is impossible!”