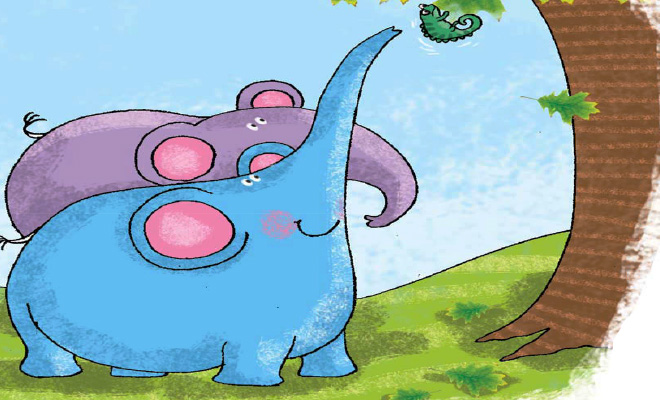 When Golu and Motu, the elephants were strolling around Nandavan, they noticed Gittu, the chameleon hanging on a leaf of a tree. There was a strong wind blowing, and the leaf was moving rapidly. Gittu hung on to it, trembling with fear. With the help of his trunk, Golu placed Gittu on the ground.

Gittu was relieved and said, “Thank you, friend. What would I have done without you?”

“What were you doing up there?” Golu asked with a smile on his face.

“I was just trying to climb on to the leaf. I had no idea that it would start moving so fast. It moved even faster when I sat on it. I will never forget what you did for me. Please let me know if ever you need my help,” Gittu said.

“I understand. But how will you be able to help me? You’re too small!” Golu said.

After a few days, Gittu bumped into Golu and Motu again. They were both playing behind a large rock on a cliff.

Motu said, “Hello, Gittu! Come and play with us. We can play hide and seek.”

Gittu happily agreed and quietly hid behind a large rock. Motu did the same thing.

Golu went to hide behind a rock but when he placed his leg on the rock, the rock slipped and Golu fell into a ravine.

Hearing him shout, all the animals playing around came to help. But they couldn’t find Golu.

“Where are you?” Motu yelled out.

“I am behind this big rock,” Golu said.

Everyone was worried as nobody was able to spot where exactly he was.

“Please help me get out of here. I’m stuck!” Golu screamed again.

“How do we help our friend? We can’t see him anywhere,” a worried Motu said.

Meanwhile, Gittu crawled down the cliff. He saw Golu was tightly holding on to a rock. He looked scared.

“Don’t be scared. I’ll help you out. I’ll tell the others and they will get you out of here,” Gittu said to Golu.

Gittu immediately went up again and informed everyone about Golu’s whereabouts. He said, “I know where Golu is. Let’s go quickly and get him out. But before that, we need some long ropes.”

Motu ran and got ropes. Gittu held one rope in his mouth and climbed down the cliff and passed it on to Golu.

“Hold on to this rope and climb up,” Motu said to Golu.

“No, wait. Golu is very heavy and this rope would not be able to withstand his weight,” Gittu said.

More From Champak: Help Yourself

Gittu climbed down again but this time with another rope.

“Tie it around your waist, Golu. This will help us pull you up easily,” Gittu said and ran back to the top of the cliff.

“Let’s pull him up now,” Gittu said to everyone. All the animals started pulling Golu up with the help of the ropes. Soon, he was on top of the cliff. Golu breathed a sigh of relief.

“Thank you for saving my life, Gittu. You showed one should never judge people, by the way, their looks. I’m sorry I judged you by your size. If it weren’t for your smartness, I wouldn’t have been saved today,” Golu said and raised his trunk to thank Gittu.