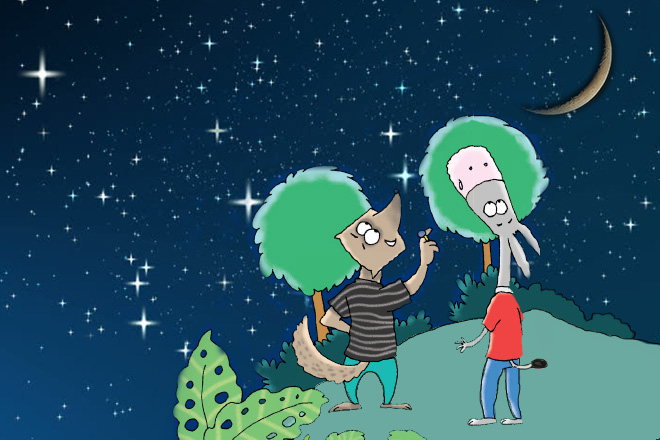 “Hey, where are you off too in such a hurry?” Tillu asked.

“You run around all day long. Is there any benefit from all your hard work?” Tillu asked.

“What do you mean?” Bholu asked.

“I have a magic ring. If you wear this ring, you can do whatever you want,” Tillu whispered into Bholu’s ear.

“That doesn’t happen,” said Bholu and burst out laughing.

“If you don’t believe me, come and see for yourself.”

Tillu then lifted his hand on which he had worn the ring and pointed it towards the moon and said, “Make the moon disappear.”

Bholu stared at the sky and immediately the moon started to disappear from one end. An astounded Bholu said, “Wow! How did you do this?”

He couldn’t believe his eyes that the moon completely vanished.

“Please bring back the moon. I believe you! The ring is indeed magical,” Bholu pleaded.

“All right, if you say so. I will bring back the moon right away,” Tillu said. Within seconds, with the help of the ring, the moon was back to where it was. Bholu was amazed.

Tillu gave him the ring and immediately snatched the money from him.

When Bholu reached home, his wife, Rani, asked, “Why are you so late today?”

“Get a big bag now!’ Bholu said excitedly. He then kept the bag on the bed, wore the ring and said, “Fill this bag up with lots of money.”

Rani was irritated with what he was doing, She said, “Tell me what the matter is.”

He repeated the entire procedure. But the bag was still empty. “Now, tell me what is happening,” Rani said. Bholu was almost teary-eyed. He told Rani the entire story. ” “Why did you listen to Tillu? Don’t you know that it is lunar eclipse today and that the moon will disappear for some time?” Rani said.

Bholu understood that Tillu had made a fool of him. He was angry with himself. The next day, he talked to his friend Bunty, the monkey and told him the whole story. Bunty was disappointed with his friend for falling into Tillu’s trap. He decided to teach Tillu a lesson.

Couple of days later, Tillu was happily sitting at Jimi, the giraffe’s restaurant when he noticed Bholu walking towards it. Tillu hid his face with a newspaper. At that moment, Hanu, the elephant appeared in front of the restaurant and asked Bholu to get out of his way.

“Hanu, don’t bother me. I have a magic ring. Go away or I’ll make you disappear,” Bholu said sternly. Bholu was so angry that he kicked Hanu. Hanu fell to the ground. All the animals, including Tillu stood still. They were in shock that a donkey could fight an elephant.

“How are you, Bholu?” Tillu asked.

“Tillu, thank you for giving me this ring,” Bholu said.

“That’s okay, Bholu. But I want the ring back,” Tillu said.

“Why? I paid for it. I’ll not return this magic ring,” Bholu said.

Bholu was hard to be convinced but he eventually agreed and gave the ring to Tillu. Tillu was very happy. He then went to Rocky, the rhino’s sweet shop and started to eat a lot of sweets.

“You have eaten a lot. Now pay for the sweets.” Rocky said.

Tillu was confident that the magic ring would work and so argued with Rocky. Upon hearing the commotion, many animals came ahead to figure out what was wrong. At that moment, Tillu kicked Rocky but it was Tillu who got hurt. Rocky was annoyed and kicked Tillu. This time, Tillu fell to the ground with a thud.

Tillu didn’t understand what was going on. He thought his ring had stopped working. He then noticed Bholu, Hanu and Bunty laughing across the window. Hanu stopped laughing and asked, “Is the magic ring not working, Tillu?”

Tillu understood everything and was so embarrassed that he ran off to another jungle.