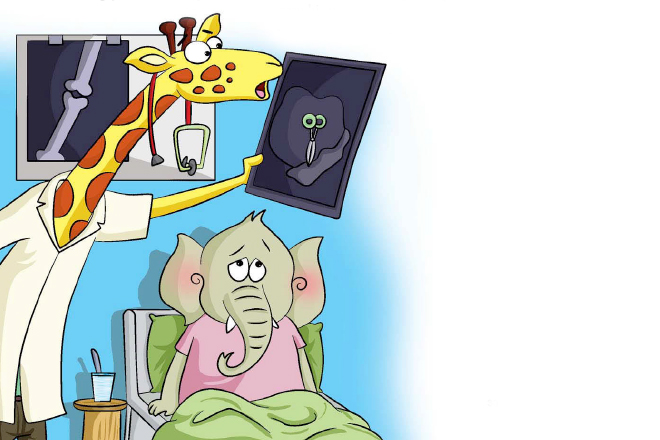 Dr Jeru Giraffe practised medicine at Champakvan. He was a surgeon and would perform complicated surgeries. Animals would come from faraway places to be treated by Dr Jeru. But, as talented as he was, Dr Jeru was also absent-minded.

One morning, Jumbo, the elephant came in for an appendix operation. He was taken to the operation theatre for surgery before being shifted to the ward. It was only at lunch that one of the doctors asked Dr Jeru what happened to his ring.

Dr Jeru realized that the ring he always wore on his finger was missing. He searched his office, his bag and even his pockets before realizing that he had left it inside Jumbo while he was operating. Jumbo was rushed back to the OT and the ring was retrieved. Fortunately, Jumbo was still under anaesthesia and didn’t remember a thing.

If you thought that was the end of that story, Jumbo was back in a couple of days with a stomach ache. Dr Jeru was worried that he might have left something else behind. He took an X-ray and realized that he had left the scissors he used to cut the stitches inside him.

Jumbo was rushed to the OT once again and the scissors were quickly removed. Jumbo was shifted back to the ward. He sat in his bed and wondered how much the hospital bills were going to come up to when his phone started ringing. Jumbo reached into his pocket and pulled it out to answer, but his phone wasn’t ringing. Yet, he could hear the sound of ringing phone loud and clear. Jumbo decided that he was just tired and turned in for the night.

Unfortunately, Jumbo woke up every five minutes to the sound of a ringing phone. It was only at two in the morning that Jumbo finally fell asleep. But three hours later, he woke up to the sound of an alarm.

The lack of sleep and the ringing alarm had driven Jumbo crazy and Jumbo ran along the corridors waking everybody up. Dr Jeru calmed him down and Jumbo explained what was happening. Dr Jeru slapped his forehead.

“Jumbo, I think we’ll have to take you in for another operation,” said Dr Jeru. “I think it’s my phone that’s been ringing. I may have left it inside you.”

Jumbo was prepped once again and as he was about to be given anaesthesia, he said, “Doctor, maybe you shouldn’t put stitches this time.” “Why do you say that?” Dr Jeru asked.

“Every time you stitch me up, you have to open me up again. It’s painful. I was hoping you could install a zipper instead,” said Jumbo.

Dr Jeru laughed and apologised to Jumbo for all the trouble. “This time I’ll be extra careful,” he said. “Also, because I’ve caused you a lot of trouble, I promise not to charge you for your stay here.”

Jumbo was relieved and as he fell asleep because of the anaesthesia, there was a big smile on his face.