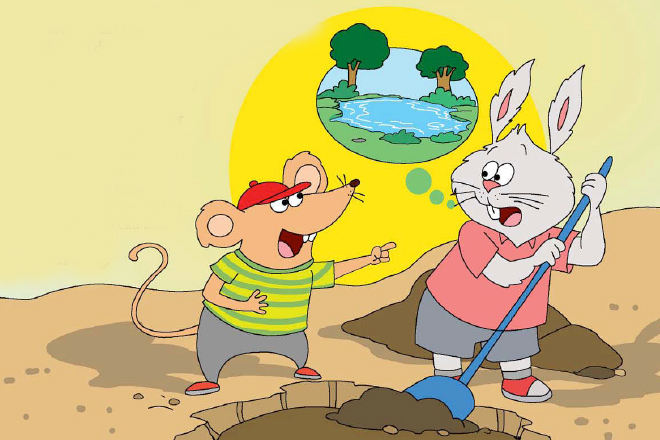 Champakvan was going through a massive heatwave. The sun beat down upon the earth, making it terribly hot. It felt as if the animals were living in a furnace. As a result, all the animals spent most of the day indoors and only ventured out in the evenings. The evenings were no cool dip in the pond either. The ground was still as hot as before, but the shade under the trees made life a little better.

Over the years, the summers were getting worse. This year was the hottest, and every evening, all the animals would plan for the next day.

Meeku, the mouse stepped out to stock up supplies for the next day. As he was walking around, looking for some food, he saw that his friend Cheeku, the rabbit was digging a hole.

Meeku found this to be very strange. While the rest of the forest was looking for supplies to last them the next day, Cheeku seemed to be wasting his time digging. After some debate, Meeku decided to go over to Cheeku and find out what he was doing.

“What are you doing, Cheeku?” asked Meeku.

“I can see that, but what are you digging?”

“You’re joking right?” asked Meeku. “The entire forest is reeling under the heat of the summer and instead of gathering supplies for tomorrow, you’re digging a hole? Why are you doing such a silly thing?” Meeku burst into laughter.

“It is not silly. I’m very serious about digging a lake,” said Cheeku. Meeku stopped laughing

“Our lake is fine for now, but do you realise that every year, just after the summer, we face a severe water shortage? I’m digging this lake so that there will be enough water for all of us,” said Cheeku. “I don’t understand one thing though,” said Meeku. “How do you intend to fill this lake up?” “With rainwater of course. Every year when it rains, we let so much water go to waste. In fact, my plan is to dig a pit near my house and send all the water from the drains of my terrace to this pit,” said Cheeku.

“What for?” asked Meeku.

“This will raise the water table and recharge the groundwater instead of letting all the rainwater flow away back to the ocean. Imagine if we saved all that water, we’d never have to worry about going thirsty ever again,” said Cheeku.

“Hmm, you make a good point. But do you really think you’ll be able to finish digging before the rains start?” asked Meeku.

More from Champak: Where Are The Rains?

“No, I don’t think so, but if you work hard now, you can reap the rewards later,” said Cheeku.

Meeku was deeply moved by Cheeku’s actions. After gathering all his supplies for the next day, Meeku came to Cheeku and said, “I would like to help you with your cause. You seem to be doing something great and I want to be a part of it.”

Cheeku was very happy to see that Meeku was also interested and together they began to dig.

Blacky, the bear and Jumpy, the monkey, who were passing by, stopped when they saw Cheeku and Meeku hard at work. “What are you guys doing?” they asked. When Meeku and Cheeku explained, Blacky and Jumpy wanted to help too. Each grabbed a pickaxe and helped loosen the soil for Meeku and Cheeku to dig. Jumbo, the elephant joined in as well and started digging. Soon, the word spread across the forest and animals joined in from far and wide. Even the King of the jungle, Shersingh, the lion was there.

Seeing all the animals working together, Shersingh said, “Looks like next year we’ll have enough water to last us more than a year. All the rainwater will no longer go to waste.”

However, Jumpy had something to say, “Cheeku has started a good thing, but this is only to save water. What will we do about the heat that rises every day? We won’t be able to escape this heat just by digging.” All animals started thinking the same.

Teetu, the butterfly chimed in, “We can plant more and more trees, and this will bring down the heat. We should get started now.” Cheeku then said excitedly, “Yes! This is a good idea. Before today, all we did was talk about bringing change, but from now on we will dig for water and also plant trees sincerely. This will help reduce the heat.”

After listening to him, all the animals became excited as they had got the solutions to all their problems. All of them started working enthusiastically towards these solutions.