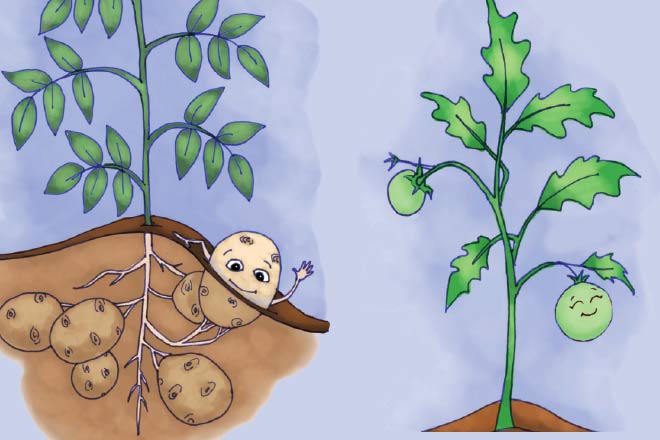 A tiny potato emerged out from the soil. It beamed with happiness.

It thought, “Wow, what a world! I have heard a lot about the world. Fortunately, I can now see it. I am going to have fun.”

While it was looking around, it spotted a green coloured round thing, clinging on to a climber. It asked, “Hey, who are you?”

“You came out before me?” the potato questioned.

The tomato replied, “I have always been out since I was born.”

The little potato felt bad. However, it soon forgot everything. It was a jolly thing. It got back to its original fun-filled mood.

It thought, “I will see the entire world.”

While it was still thinking, it saw a long, green thing hanging from a straight standing plant.

“You also came out before me!”

The chilli replied, “I have always been out, soaking in the sunlight, breathing in fresh air.”

The potato’s face fell. There were other plants in the garden, on which tiny fruits were swaying in happiness.

The potato asked the little pea, “Have you always been out as well?”

The pea was naughty. It sensed the potato’s restlessness. It said, “Is this a question to ask? Not only I, but everyone out here hasn’t been buried under the ground. We breathe in fresh air. All of us sleep under the moonlit sky. We wake up with the golden rays of the sun. It’s fun swaying in the breeze.”

“Hmm, this means that I am the only one who has to stay underground. How unlucky we potatoes are! Look at the others. They are all so shiny and beautiful. They live in fresh air. I look so filthy and ugly! Nobody will even notice me.”

The potato felt sad. After talking to the other vegetables, it kept quiet.

A few days later, it was kept in a basket.

It was taken to the vegetable market. All the other vegetables also went along.

“Look, the king of vegetables has been kept near me!” the brinjal exclaimed excitedly.

The potato asked, “Where? Who is it? Please tell me.”

The potato was curious. The brinjal became silent for a while.

He asked the brinjal, “Why are you looking at me like that? Am I that ugly?”

With some hesitation, the brinjal replied, “You are the king, the king of vegetables.”

“Why are you making fun of me? I am an ugly vegetable, who lives underground. How can I be the king?” the potato questioned.

The brinjal replied, “You really are the king. You have all the qualities needed to be a king. Most vegetable preparations are made with you. When there is no other vegetable you alone are sufficient. People can have a satisfying meal by just eating you.”

The pumpkin was lying close by. It said, “You are healthy. How can you not be king? You have Carbohydrates, Vitamin C, Iron, Calcium, Phosphorus, Riboflavin, Carotene and Niacin.

The little potato was pleasantly surprised. It was finding it difficult to believe that it was the king of vegetables!

It thought, “Inner qualities and usefulness are more important than outer appearances. I might be ugly on the surface but my other qualities make me stand apart from others, so much so that I am their king!”