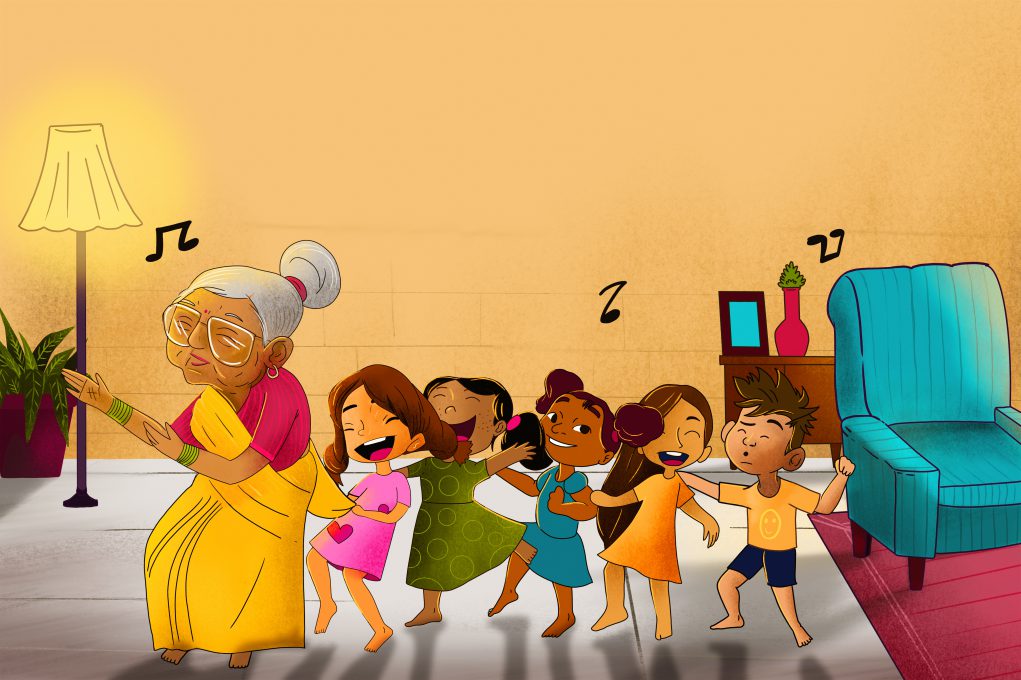 Geeta was not aware that Srishti’s grandmother was a poet. Geeta had come to celebrate grandma’s birthday at Srishti’s invitation.

Dadi asked, “If we want to celebrate my birthday, would you all like to do it my way?”

“Yes, why not, dadi,” replied Srishti, “So, will we not cut a cake on your birthday?”

“We will neither cut a cake nor will we blow candles. We will do something more fun!”

“So, how do you want to celebrate it?” asked Geeta.

“We will sing and dance,” said dadi.

“Wow! That sounds like a lot of fun,” said Srishti.

“So, let’s begin with some rhymes,” said dadi. 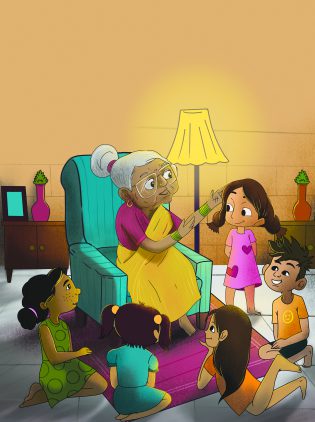 “What are rhymes?” asked Srishti.

“We have to say something in two, four or six lines, which should end in rhyming words like bad-mad, day-say, couch-pouch.”

Dadi made a funny face and said, “So, listen:

But they don’t growl!

Look closely, you will see!”

Everyone laughed. “Wow, dadi! An owl’s face resembles ours. But dadi, you are not an owl. You are our beloved dadi,” said Srishti and hugged her.

Geeta had thought of some lines. “May I give it a try?” she asked.

Who goes ahead and who comes back last?”

“Wow!” As soon as Geeta said her rhyme, Srishti, Smridhi and Priyanka stood in line. Dadi said go and everyone ran. Geeta was the first one to come back after touching the wall.

“Wow, dadi, your birthday will be memorable,” said Srishti.

“After all whose birthday is it?” said dadi and started reading one of her poems,

We make a circle,

And make a chuk-chuk train.” 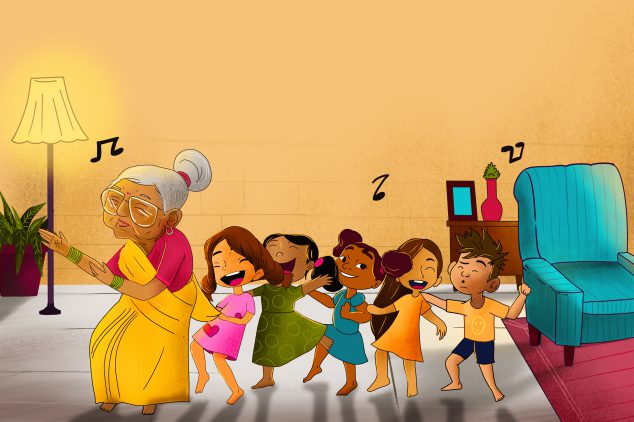 Dadi stood in front and the children held onto each other’s shirts and started the train. Chuk-chuk! Rahul was at the back. He was blowing a whistle and then said,

“Kabaddi is a number one game,

played by the wise,

Not for those who don’t exercise,

Whoever touches the winning line,

They will wear the garland of

Saying so, Rahul made two teams and started playing Kabaddi. Dadi was quick and touched the winning line and returned.

After some time, they all got tired and sat down to talk.

“Dadi! When you were young, were you afraid of exams?” asked Smridhi.

“Yes, like everyone I too was afraid of things I didn’t understand,” said dadi.

“People who didn’t understand the dark were afraid of it. The only reason we still fear things is because we don’t know them.”

“My grandfather used to say exams test our knowledge. They bring out whatever one has learnt.”

“What does this mean, dadi?” asked Geeta.

“Exams are held so that we can ask ourselves what we know and test our memory. So, why should we fear them?”

“Hmm…I did not think of exams that way,” said Srishti, “Now, what do we do next, dadi?”

Dadi distributed sweets to all the kids. She also gave them a storybook. 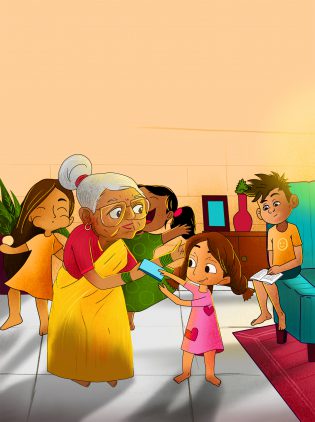 “My children! If everyone reads their books, I’ll think my birthday was meaningful,” she said.

We get to play aboard a train!

May we sing and dance a lot just like this,

And give dadi a hug and a kiss.”

Saying this everyone hugged dadi and sat down to eat dinner.

One thought on “Let us Rhyme”

I like this story because it is a good memorable birthday story.It has so many games.