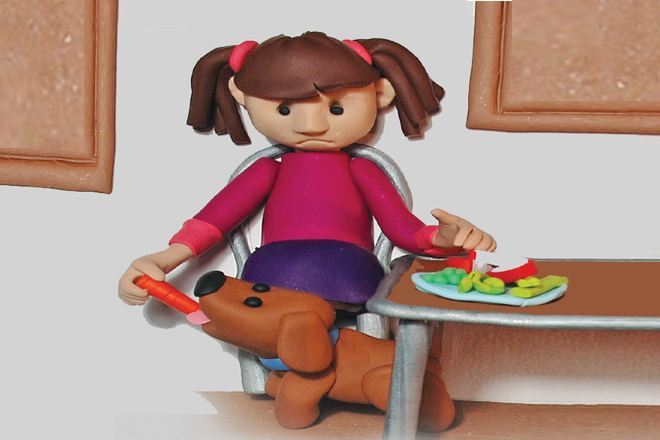 Zena was a little girl. She was small for her age and small in size. She was an active and a happy child until she was very small. As she started growing up, things began to change.

However, when it came to eating vegetables and other healthy foods, she would not touch them. Her mother used to worry.

Her mother thought, “What will happen to my Zena if she doesn’t eat well? Where will she get energy from?”

So Zena’s mother came up with an idea. She bought a pet dog, Gimps for a little Zena. During meal times, she used to keep the dog with Zena. With the dog for company, she would eat well.

However, things soon changed. Since Zena didn’t like the food, she began to feed all her food to Gimps when her mother was not looking. This went on for a while.

After a few months, when Mummy took little Zena to the doctor, she had neither grown in height nor in weight. Her skin was paler.

Unlike before, she also began to cry over little things. This surprised both Zena’s mother and the doctor.

The doctor asked Zena’s mother, “Why is it that your baby is not growing into a healthy child? Don’t you give her proper food?”

Zena’s mother didn’t know how to answer this question. She had thought that Zena had finally been eating well.

This situation remained so for a few months.

Then, one day a strange thing occurred. Little Zena was sleeping. Gimps, her pet dog, was also sleeping near her on the floor.

While sleeping, Zena dreamt that her dog Gimps was eating all her food. Day by day, he was growing into a bigger dog, whereas Zena had remained the same tiny little girl. Not only her dog, but all the insects in the house, and the birds and animals that passed by her house had started growing. All of them looked like giants.

As she saw them, Zena was terrified.

Suddenly, she woke up from her nightmare and started crying.

Her mother, who was sleeping next to her, also woke up with a start.

She tried to console her little girl. She offered her milk as she thought Zena might be crying as she was hungry.

However, Zena continued crying. She asked her mother for green vegetables. This made her mother smile. From that day onwards, Mummy never had to force Zena to eat healthy foods. As the years passed by, Zena grew up to become a very healthy and strong girl.