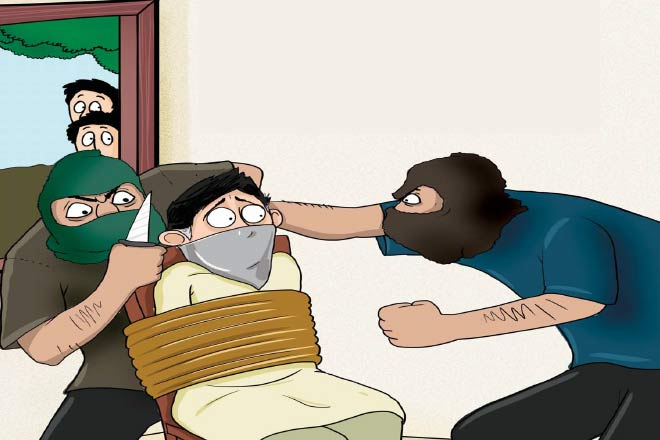 It was a Sunday morning. Manu and Tinu were playing cricket on the playground near their house. Suddenly, the ball bounced hard and went into the adjoining house.

“Oops!” Manu said. “Tinu, our ball has gone into Seth Malmalram’s house. Come on! Let’s go and get it back!”

Both the boys then ran towards Seth Malmalram’s house to look for their ball.

“Look! There’s our ball,” Tinu said and pointed towards the ball that had fallen near a window.

The two boys then went closer to the window to retrieve their ball.

It was then that they heard the strange noises coming from inside the house.

Manu and Tinu were curious. They knew that Seth Malmalram was a quiet person and rarely made any sounds. They peeped through the window and looked inside. The two boys were horrified by what they saw.

Seth Malmalram was gagged and tied to a chair. There were two men in the house besides him. They both looked very shady.

“Oh no! Seth Malmalram has been gagged and tied to a chair!” Manu said, looking very shocked.

“Those two men must be thieves!” Tinu said as he watched the two men.

“I can see them opening the drawers and cupboards. They are stealing jewels and money from the house.”

“We should do something and save Seth Malmalram from being looted. He is our neighbour after all,” Manu said, looking very concerned “Tinu, why don’t you run to the police station? Tell Inspector Shyam what we’ve just seen. I will stay here and teach these fellows a lesson!”

Tinu did as he was told and ran towards the police station.

Manu stood still for a moment, wondering what to do. He spotted a motorcycle that was parked outside the house.

“Aha! This motorcycle must belong to the thieves!” Manu thought. He found a sharp stick and punctured both the tires of the motorcycle. “This will slow down their escape.”

Manu then looked around and found some stones. He picked them up and put them in his pockets. He then went back to the house and sneaked in after opening a bathroom window.

Manu found a small bucket of water lying in the bathroom.

“This will come handy,” he said, picking the bucket up.

Manu then tiptoed and went into one of the bedrooms. There was a big almirah kept there.

“Hmm,” Manu thought. “The thieves haven’t come into this room as yet. But I’m sure they’ll be here soon.”

Manu had guessed correctly. After some time, the thieves entered the room.

“We will get a huge booty today, Chunty!” the thief whose name was Bunty said. “Only this almirah is now left for us to loot!”

“Yes! Let us open it and take whatever we can, Bunty,” Chunty said and grinned.

The two thieves put their hands forward to open the almirah but to their surprise, something fell on them. It was the bucket of water that Manu was taken from the bathroom.

“Ow!” the thieves screamed. They were startled and stepped back at once.

“Who’s there? Who has thrown water on us?” Bunty shouted.

Manu spoke in a throaty voice and said, “I said that. I am the almirah. You both have dared to open me without asking for my permission. I will punish you for doing that.”

The two thieves were astonished. They had never heard an almirah talk before.

“Bunty, did… did this almirah just say something?” Chunty nervously asked.

Bunty was nervous too. But he didn’t want to show his friend or the almirah who he believed could talk, that he was scared. He tried to sound as bold as he could and said, “We are not afraid. You cannot stop us from opening you.”

Bunty put his hand forward to open the almirah again. Manu, who was crouching on the top of the

Manu, who was crouching on the top of the almirah and clearly out of the thieves’ view, pelted the thieves with the stones he had picked up.

The two thieves were terrified now. They were shaking like leaves and wondering how an almirah had stoned them. They ran towards the door.

“Let’s get out of here!” they both shouted. “The almirah must be haunted!”

The two thieves opened the door and ran towards to their motorbike.

But to their dismay, they found it punctured.

“The tires are punctured!” Chunty cried. “What bad luck!”

“Forget about the motorbike! Let’s run instead!” Bunty shouted.

The two thieves turned to run. But they had a rude shock when they saw Tinu standing there. Tinu had arrived at the nick of time with Inspector Shyam.

Bunty and Chunty panicked when they saw Inspector Shyam. He was already pulling handcuffs out of his pocket.

“Going somewhere?” Inspector Shyam asked and arrested the thieves at once.

Manu and Tinu then ran to untie Seth Malmalram who thanked them and praised them for their bravery and intelligence.

Inspector Shyam then invited the two boys to the police station where he rewarded them with a medal and a certificate each.

Manu and Tinu were very happy that day. Whoever thought so much adventure could come from a lost cricket ball!