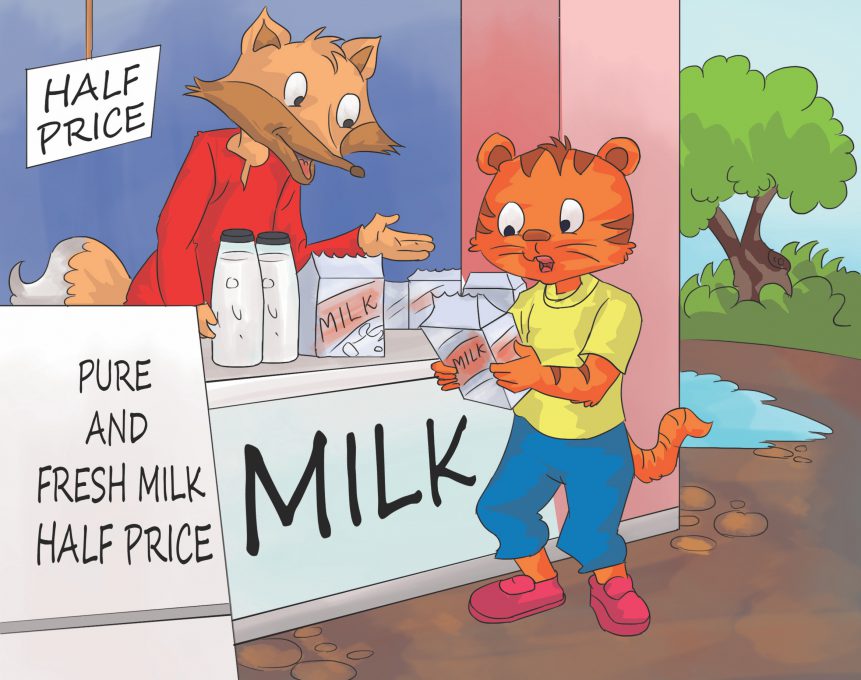 In those days, Kaalu buffalo’s milk business was profitable. He was very hardworking. Kaalu would sell milk all day long and return home only after checking the accounts.

The animals of Kanchanvan liked the pure milk sold at his dairy. But Jojo jackal was very jealous of Kaalu. Jojo too wanted to open a dairy but was not successful at it.

“If Kaalu sells a litre of milk for INR 50, I will sell it at half the price,” Jojo thought to himself. To make milk cheaper, Jojo mixed the pure milk with chemicals and powder, adulterating it. The adulterated milk looked exactly like pure milk.

“Now, no one will be able to doubt this milk,” Jojo chuckled.

The following day, Jojo opened his dairy with a board that read, ‘Pure and fresh milk at half the price’.

Soon, his dairy was crowded with animals who wanted to buy cheap milk.

“Oh wow, good-quality milk at half the price!” Rinki cat exclaimed while reading the contents of a milk packet. “Is this milk fresh?” she asked.

“Do you have any doubt? One of my friends has opened a milk factory in a nearby village. Every morning, I go to the factory and bring pure and fresh milk,” Jojo assured.

There were many customers standing in a long queue outside Jojo’s shop and he earned a huge profit that day.

“So much money in just one day! If my luck works like this each day, very soon I will become a millionaire,” he said to himself.

“I wonder why the animals didn’t come to buy milk today,” he thought and sent his friend Chotu mouse to investigate.

After investigating, Chotu explained that all the regular customers had bought milk at Jojo’s shop who was selling milk at half the price. “Should we also lower the price of milk?” he asked.

“No. We sell pure milk at the right price. We earn a small profit from it. If Jojo can sell milk at a cheaper price, let him do so,” Kaalu answered.

Next day, again Jojo’s dairy was filled with customers while there were none at Kaalu’s dairy.

When King Lion came to know about this, he came to Kaalu’s dairy and said, “The milk from your dairy costs too much. Jojo is selling the same milk at half the price.”

“I know, your majesty. But I cannot lower the price of milk,” Kaalu answered.

“By selling milk at such a high price, you are robbing the animals of Kanchanvan,” King Lion roared in anger. “I will see how you should be punished,” saying this he walked away.  Many animals watched this. Kaalu’s eyes filled with tears, but he remained silent. 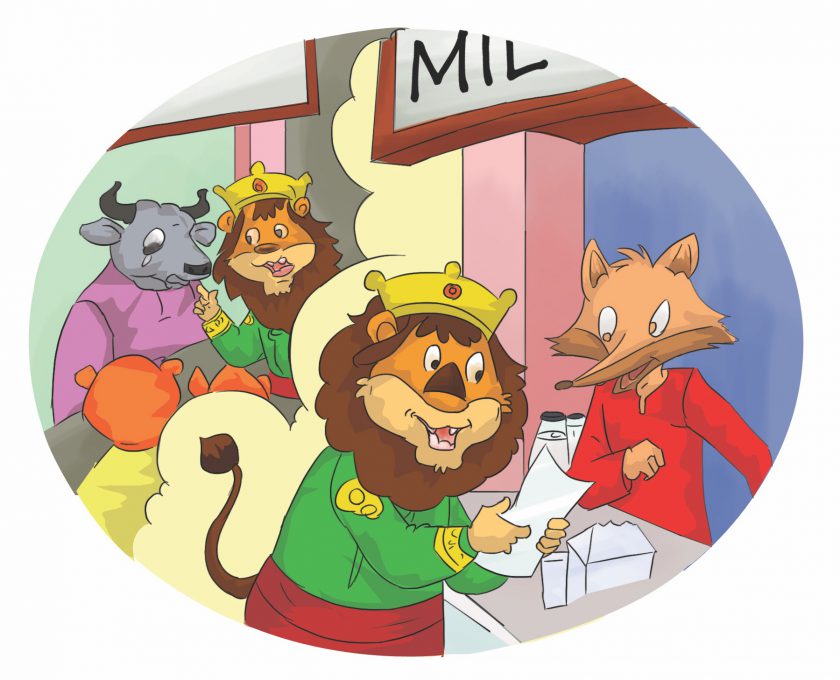 At the birthday party, the animals licked off the yummy sweets and kheer. But not long after midnight, many animals began to feel sick. Some started to vomit while others had loose motions.

“I am unable to understand. Every ingredient in the food was of good quality. Then, how come everyone is falling sick!” King Lion roared.

“Majesty, I think that there was some problem with the milk,” minister Browny bear said with suspicion. “You see, I did not eat either sweets or kheer, and I am absolutely fine.”

“Hmm, I think you are right. Every year, milk is brought from Kaalu’s
dairy. But this year, we brought it from Jojo’s dairy.”

“Let me investigate the matter,” saying this Browny left the party.

After keeping an eye on Jojo for a couple of days, Browny saw Jojo mixing chemicals in the milk at his house.

On learning the truth of the matter, King Lion was filled with rage. “The cheap price of Jojo’s milk fooled all of us.” He ordered Jojo to be arrested immediately.

Next day, when Kaalu opened his dairy, he found King Lion standing there. “Majesty, you, in my dairy?”

“Yes. I am here to have a cup of tea from your dairy. And also, to apologise,” saying this King Lion told Kaalu everything. “Kindly forgive me, Kaalu. I insulted you in front of all the animals that day.” Kaalu  immediately forgave King Lion.

“Here is a cup of tea for you, majesty,” said Chotu Mouse cheerily while serving the king.

“Are you sure that this cup of tea has been made from Kaalu’s milk?” hearing this, the entire Kanchanvan was filled with the roars of laughter. 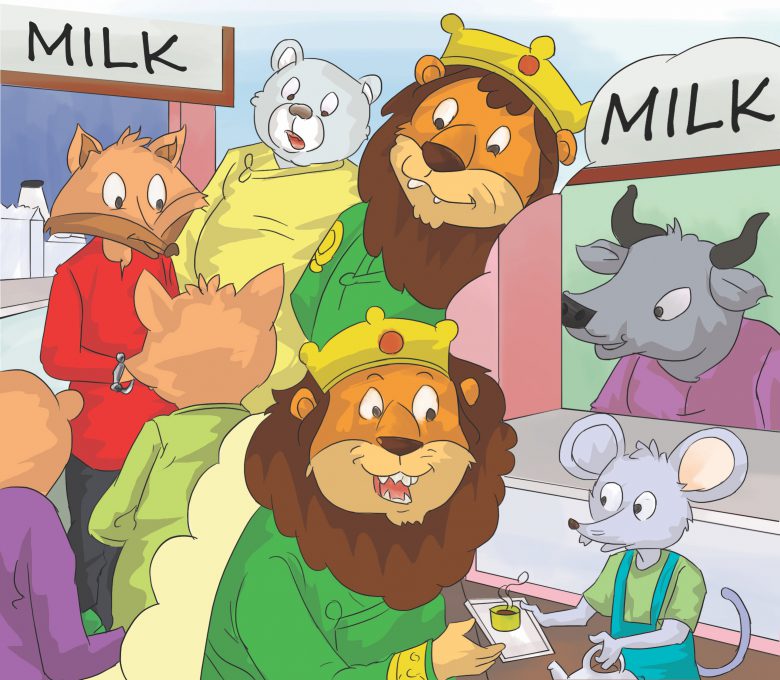 2 thoughts on “Matter Of Cheap Milk”