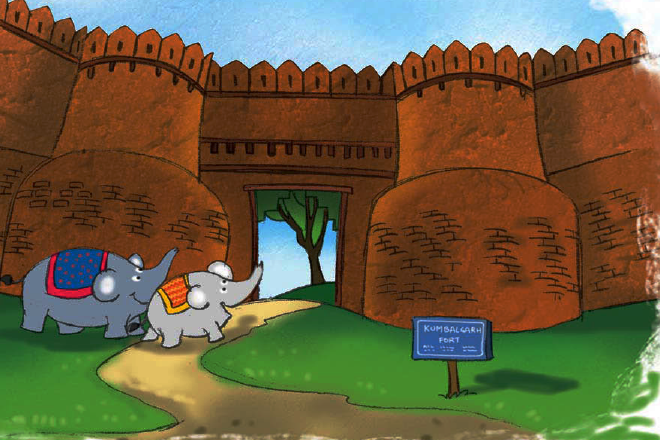 Mattu, the elephant was excited. His mother had promised him weeks ago that she would take him to a place of historical importance and that day had arrived. Together, Mattu and his mother set off early in the morning. They walked through jungles, up hills and across grasslands to reach their destination.

“Here we are!” announced Mattu’s mother. “This is Kumbhalgarh Fort.”

Mattu was at a loss for words. The fort was huge and unlike anything he had ever seen before.

Mattu’s mother explained that this fort is 1100 metres above sea level and was built by Maharana Kumbha who had also designed it. She also mentioned that it was built in the 15th century.

“What? How is it still so strong despite being built so long ago?” asked Mattu, astonished. But before she could answer, somebody had joined them. It was their guide and he’d been waiting to meet them.

Once the introductions had been made, it was time to explore the fort. The guide explained that the fort, built across several mountains was over 36 kilometres long. Mattu noticed that the walls went as far as his eyes could see. The guide also added that the walls were wide enough for four soldiers on horseback travel along it.

“This fort is almost unbeatable. Many kings have tried and failed. The only time this fort has not stood up against its enemies was when the forces of Akbar, Raja Man Singh of Amber, Raja Udai Singh of Marwar and the Mirzas of Gujarat joined forces during a severe water shortage,” said the guide. As Mattu and his mom looked around, they saw crowds of people in the distance. The guide explained that ever since the fort had been made a UNESCO World Heritage site, it became an important place to visit. He also told them about the Kumbhalgarh Sanctuary nearby and told them about the light and sound show that took place every evening where the history of the fort was explained.

Mattu was enjoying his tour of the fort. They passed through the fort’s seven gates. The first was called Aarothpol, the second, Hallapol, the third and most important gate was called Hanumanpol. Just as they reached the third gate, the tourists caught up with them. They were excited to see so many elephants and wanted to click photos with Mattu and the others.

As they passed through them, Mattu was astonished by the grand scale in which each of these gates were built. Mattu was equally surprised to see fields, ponds and step wells inside.

The guide then took Mattu and his mother to the Cloud Palace or Baadal Mahal. When they got there, they were high up in on the mountain. It seemed like they were among the clouds.

The room was decorated with beautiful paintings and the guide told them that Maharana Pratap was born here. Mattu had learnt about him and his valiant horse, Chetak in school.

The view from the top was incredible. The interesting thing about the fort was that despite being so high up on a mountain, all the trees made it virtually impossible to spot from the ground.

The guide explained that the fort was not maintained by the Archeological Survey of India.

Mattu’s mom also told him that many of the palaces in the area had been converted into heritage hotels and that a lot of facilities were available. “The Kumbhalgarh Festival is held here every year where artists from around the world come to perform,” said Mattu reading out his guide book. Just then, a few children had gathered around them. They asked Mattu’s mom if she could give them a ride. She agreed and took them around a section of the fort. While she was gone, a few other children played with Mattu. When Mattu’s mom returned, the children were very happy and thanked her for the ride.

The guide then showed them the rest of the fort. There were many shops there and Mattu’s mom picked up a little souvenir. All the sights and sounds at Kumbhalgarh had left Mattu and his mom feeling overwhelmed.

As they went back home from their tour of the Kumbhalgarh fort, Mattu’s mom told Mattu all about the bravery of the kings of Rajasthan, and what a great architect Rana Kumbha was.

Mattu had fun, and couldn’t wait for the opportunity to go explore the great old forts and monuments near his home.