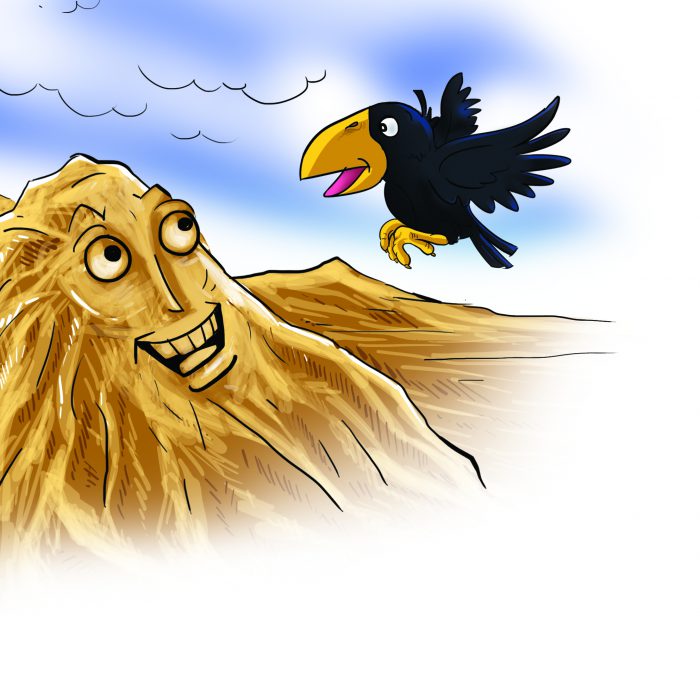 As soon as Minti mynah came out of her nest, she saw Bizy hawk circling the sky. Seeing him, she flew away in the other direction. After she had flown a short distance, she felt someone was following her. It had to be Bizy, she knew. 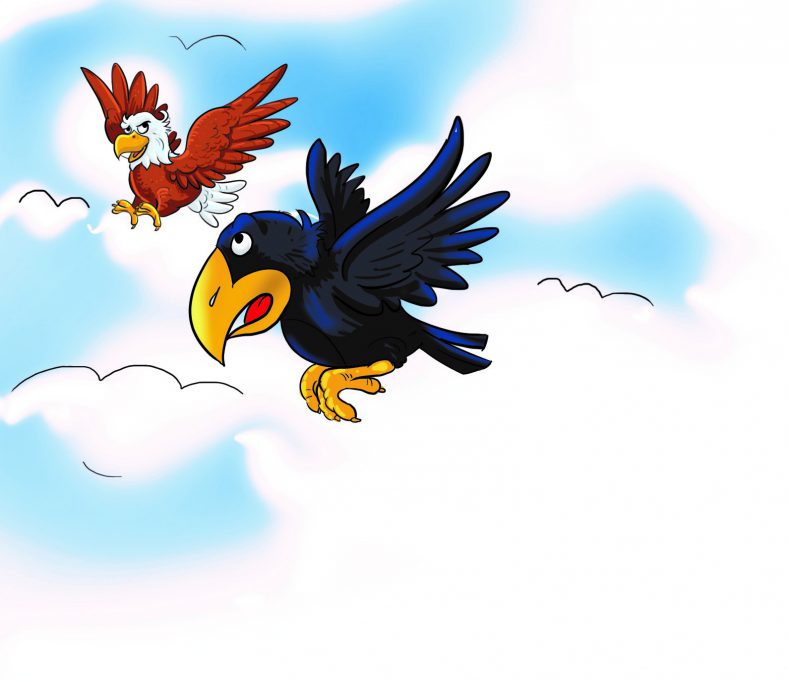 Minti suddenly changed her course. Instead of going towards the village, she went in the opposite direction. She increased her speed. She did not lose courage and flew with full might. Bizy chased her for quite some time but when Minti started flying over a barren and deserted region, he stopped chasing her. Bizy knew that it was difficult for him to fly in the open sky on barren land. So, he turned back.

Minti kept on flying. She did not turn her head to see if Bizy was still chasing her. After some time, her strength gave up and she fell down.

For a long time, she laid there motionless. When she came to her senses, she found herself on a barren hill. There were no trees there, not even a plant. All one could see were a few stumps of dry grass. Her throat was parched and she was feeling very thirsty. With great difficulty she pulled herself up. Her wings ached and she was not in the condition to fly. Somehow she managed to drag herself under the shade of a rock.

After resting for a while, she felt better. She said to herself, “Which place is this?”

“This is the Dry hill.” a voice spoke. 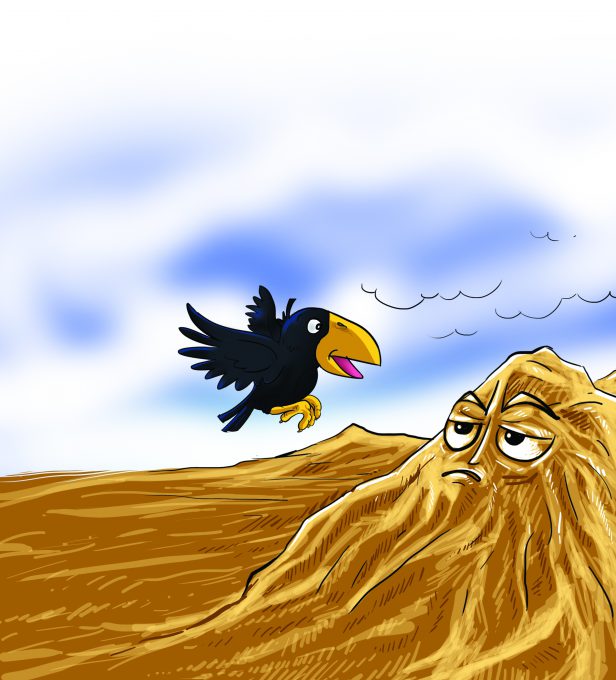 She looked around but could not see anyone. “Who is that?” she asked.

“I am the Dry hill,” came the reply. “A living creature has come here after a very long time. Tell me, how can I help you?”

“Just give me some water. I am very thirsty,” said Minti.

“There is no water on this hill,” said the hill.

“I know. But I wasn’t always like this,” said the Dry hill sadly.

“I am telling you the truth. There were beautiful trees here and greenery everywhere. Birds sang on the trees and water flowed in the rivers,” said the hill.

“Looking at you, no one can believe that!” said Minti.

“Not only you, there’s no one else who believes this. My present condition is due to my beauty,” said the hill.

“Many people from different places came here and settled. Slowly, this place became overpopulated. People started cutting trees for space and other needs. Large scale tree cutting led to a reduction in rainfall,” said the hill.

“What happened then?” asked Minti.

“As long as there was greenery, people stayed. But with no water and trees, I became dry and everyone left. My land became barren. And now, there are no trees and no bushes. There’s only a little dry grass here and there,” said the hill sadly.

“I feel sad for you. You witnessed your destruction with your own eyes. I came here to save my life. I did not know where I was going,” said Minty.

“Who were you saving your life from?” asked the hill.

“A hawk was chasing me. I came to this place because I knew that Bizy hawk would not follow me here.”

“Because, there are no trees here and he would not be able to fly with such a big mynah for too long. He would need to sit down on a tree. So, he stopped chasing me. If there was a tree here, then I wouldn’t be alive today,” explained Minti.

“Well, at least after all these years I have been of use to someone!” said the hill.

“Don’t say that. You can be of use to anyone even today,” said Minti.

“I was saved because of you and for this, I will certainly do something for you,” said Minti.

“After summer is over, I will come here with my friends,” she said.

“And then, what will happen?” asked the hill.

“Just wait and see. This is my promise to you,” saying this, Minti gathered her strength and left the place, bidding goodbye to the dry hill.

After some distance she saw a river and had a good drink.

Dry Hill was very pleased after his talk with Minti.

There were still two months left before summer got over. He remembered Minti and her promise every day. Sometimes, a doubt would come to his mind if she would keep her promise and come back. But he could just wait and see.

Summer ended and it started raining. Dry Hill felt relief from the heat. Then one day, he saw a hoard of mynahs flying towards him. He was overjoyed to see them.

“Hello, do you recognize me?” asked Minti, as soon as she came on the hill.

“Of course! I have been thinking about you all this time,” said the hill.

“I was waiting for the rains. I came here as soon as the rains started,” said Minti.

And she and her friends scattered many seeds that they had brought with them, on the hill.

“What are you doing?” asked Dry Hill.

“We have come here to scatter seeds. They will sprout with the rains and one day, become big trees.”

“Will this really happen?” asked the hill.

“Yes! With rains, the seeds can get a chance to germinate. We will come again and bring more seeds. One day you will see that you have become green again and that you no longer are a dry hill. Lots of creatures will come and live here.” promised Minti. 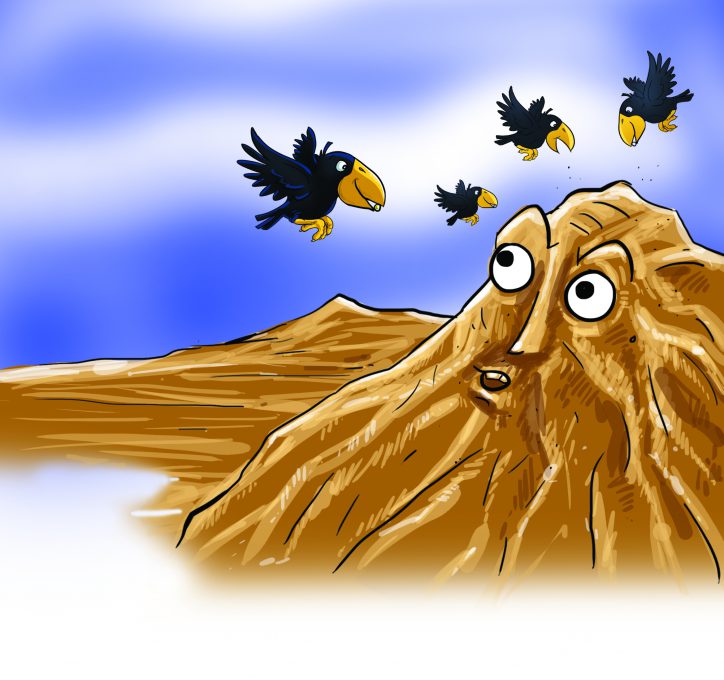 Whenever Minti could manage, she visited Dry Hill and every time she brought seeds with her.

That year, the rains were good and many seeds sprouted. Then, they started growing. Minti had scattered different varieties of seeds. Some became bushes and shrubs. Others started growing as trees.

Minti visited Dry Hill regularly and saw it becoming green. The dry hill slowly changed to a lush green hill. Small creatures came there and later, bigger ones followed them. Her efforts had given new life to Dry Hill.

One day Minti came there with her children. “These are my children. I will not live long enough to see these plants become big trees. I got my children here to meet you. It will take some time for a forest to grow here. When it does, my children and their children will live here. Promise me, that you will take care of them,” said Minti.

“I promise that I will take care of them,” the hill said in a choking voice.

A small mynah had changed a dry hill to a green forest. 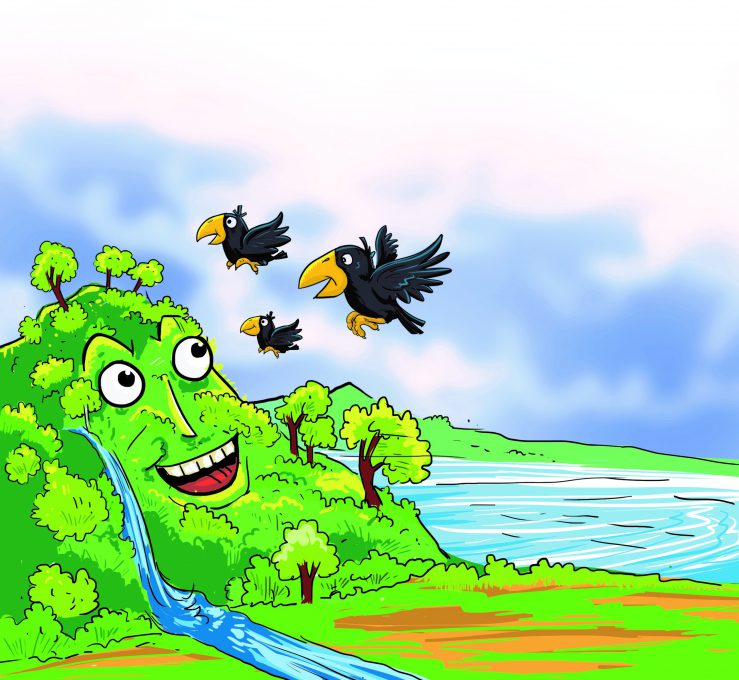