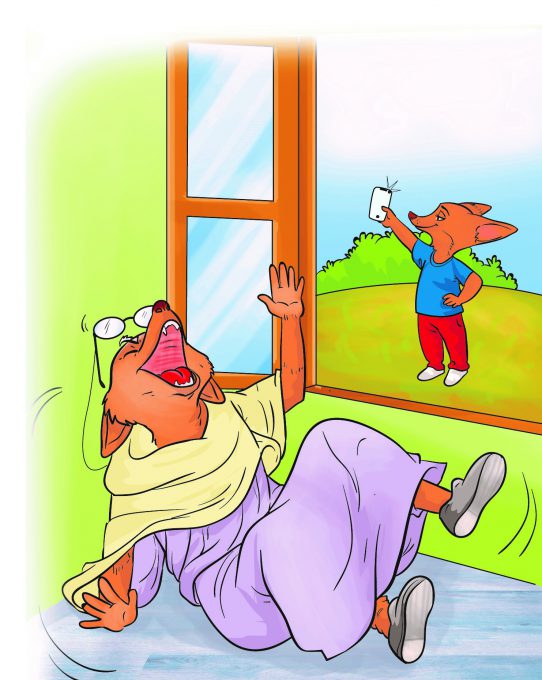 Grandma fox lived in Siddhipur with her family. Her two grandsons, Chiru and Pumpy adored grandma. She dropped them to school every day and also helped them with their homework.

Grandma was a retired principal of the only school in Siddhipur. She was highly disciplined and ensured Chiru and Pumpy were disciplined too.

She assigned duties to everyone in the family and they did their chores on time. During the day, they were all busy with their duties but at night they made sure to have dinner together.

One day, uncle Harry bear from London came to visit Chiru and Pumpy. Dinky bear, his sister, was thrilled as he had come to see them after many years.

Uncle Harry brought mobiles for all of them as gifts. He taught them how to use their mobiles and downloaded games for them. The kids loved this gift and played throughout the day. 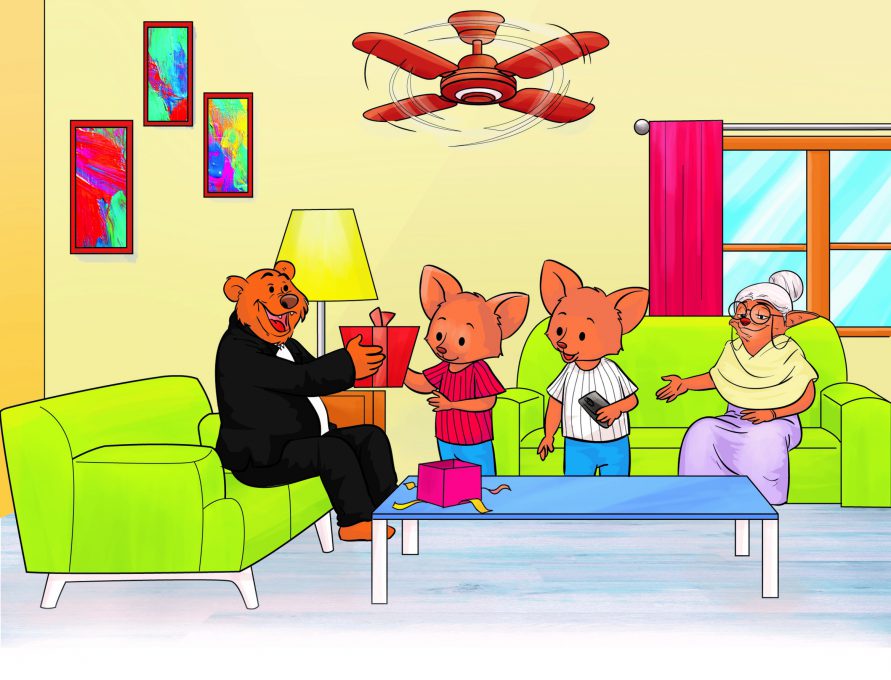 Harry knew Dinky was very fond of listening to old songs. So, he downloaded plenty of old songs on her new mobile for her to listen to. He was even gifted a pair of headphones. He gave Jitin, Dinky’s husband a phone that had an amazing camera since he knew his love for photography.

The entire family was pleased with uncle Harry’s gifts but grandma could not understand why they were so excited with these bright, noisy boxes.

The situation in grandma’s house was changing. When the family sat for dinner, each one was busy on their mobiles. The kids were always playing games and competing with each other.

Dinky listened to music the whole day and Jitin kept clicking pictures and checking them. No one paid any attention to the food they were eating. Grandma found it strange as they were all glued to these boxes but she did not say anything.

Next day, when grandma called Chiru and Pumpy over to do their homework, they lied to her that they had no homework to do.

“Why are you glued to these boxes the whole day?” she asked them.

“It is not a box, grandma, it is a mobile,” they replied.

The next day, grandma met the school teacher Holly cat during her evening stroll.
She learnt that Chiru and Pumpy had become very careless about their studies and did not complete their homework.

Miss Holly also informed grandma that they both slept during school hours. Grandma was shocked to hear all this and went back without saying a word.

On reaching home, grandma asked Dinky to make a cup of tea for her. Dinky made tea and gave it to her. When grandma sipped the tea, she immediately spat it out as Dinky had put salt instead of sugar as she was distracted listening to music. Dinky prepared dinner and forgot to add salt in the food. She also added extra chillies to the food, accidentally.

Grandma knew that nothing was in order in her house anymore.

The next morning, she dropped Chiru and Pumpy at school. As she entered the house, she didn’t see the wet floor and slipped and fell. She was in pain and called out to Jitin.

Jitin was busy with his mobile. He replied, “I am coming, ma. Let me just post a selfie.”

Grandma was hurt as she felt that her son cared more about the mobile than his mother. But she was also worried and decided to find a solution to this addiction.

She noticed that Chiru and Pumpy were awake the whole night as they were playing games on their mobiles and understood that they slept in class because of this. Dinky and Jitin were distracted too.

Grandma thought of teaching them all a lesson and she got a mobile for herself. She asked Miss Holly to teach her to use the mobile and downloaded many games and songs.

Now, she dropped the kids late to school and when they complained, she responded that she had to achieve a difficult level in the game she was playing.

She stopped calling them for homework or waking them up for school in the morning. Chiru and Pumpy were getting scolded in school constantly for incomplete homework and reaching school late.

Grandma took over cooking in the kitchen. She prepared food while playing songs on her phone and added extra salt or chillies to the food. When the family members complained, she simply said, “But I cook with utmost care while listening to music.”

One day, Jitin said, “Ma, you are paying more attention to your music and less while cooking.” That is when Dinky realised that she did the same.

Next morning, while grandma was walking in the garden, she heard a loud thud.

Jitin had fallen and he was calling out to her.

Grandma responded, “Let me just take a selfie, I have to post it on Facebook.” She felt bad but she knew she had to make Jitin realise his mistake. 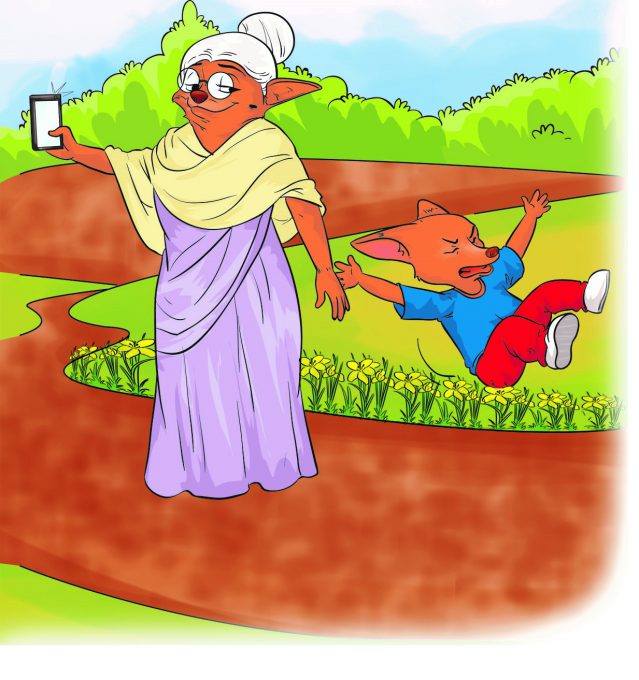 Jitin thought about how his mother’s behaviour was changing but soon realised he had done the same and ignored her when she needed him.

Everyone was feeling sorry about their past behaviour. In the evening, when they gathered to have dinner, no one carried their mobiles to the dinner table. They all apologised to grandma. Jitin said, “Sorry, ma. We will use the mobiles for a limited period in the day and ensure we don’t ignore our duties.”

Grandma was happy and forgave them. The house schedule was back in order. 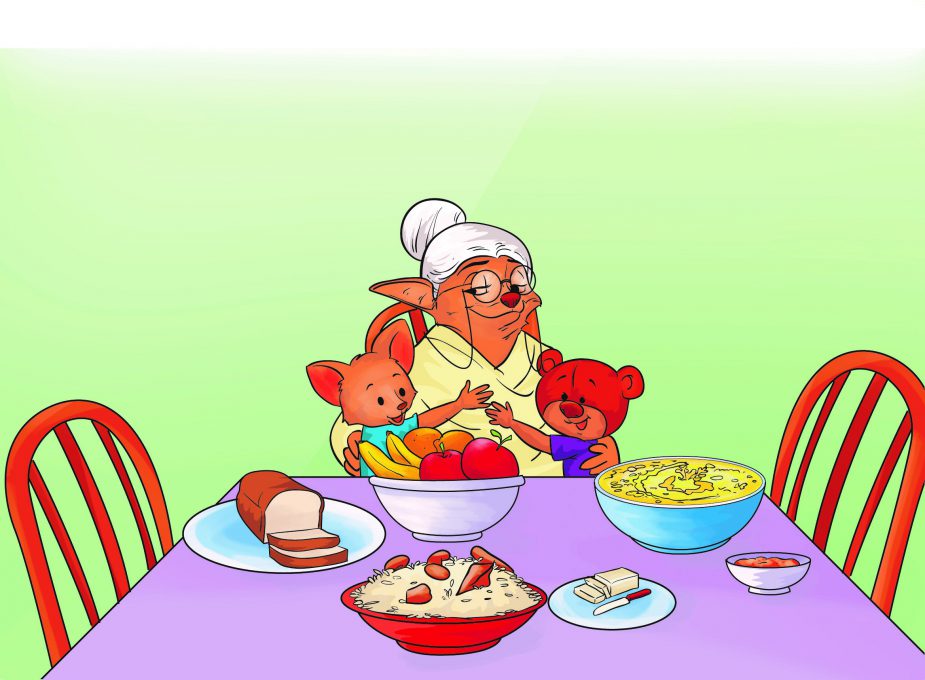