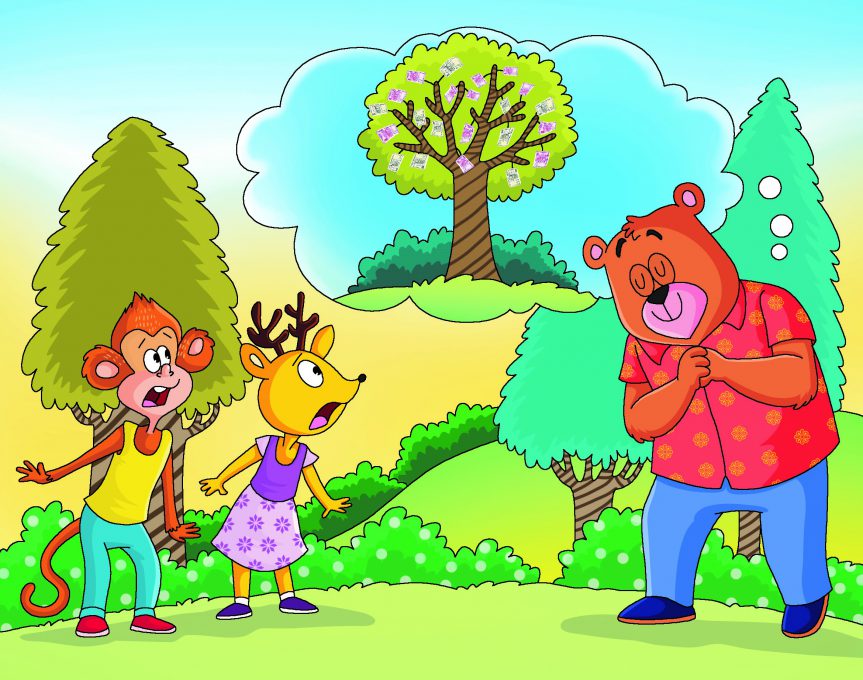 “Money on a tree?” asked everyone. Blacky bear had been telling the animals about this. They knew about flowers and fruits growing on trees, but this was the first time they’d heard someone mention trees on which money grew.

“I don’t believe a word of what Blacky said. He’s trying to fool us,” said
Jumpy monkey.

“If he had asked us to get money, I’d have thought that he was fooling us. But he is offering us such a tree in return for some help. Why do you think he’s playing a prank?” asked Dora.

Jumpy could not answer Dora. He decided to get a money tree and went to see Blacky. 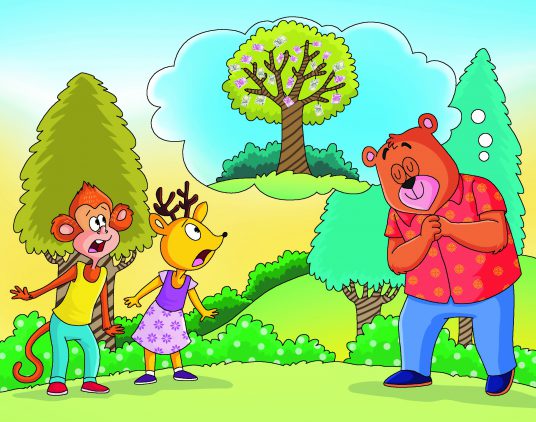 “Though I hate even the thought of doing work, I should get this wonderful money tree. Then I’ll just relax and rest throughout my life,” thought Damru donkey.

Behind Blacky’s house was a large plot of unused land that could be used as a farm but the land was uneven and full of gravel and stones. It needed a lot of work for it to be ready for farming. Blacky spoke to the animals in the forest about his farming idea. But most of the animals didn’t want to work, so nobody offered to help Blacky. That’s when he got this bright idea to offer money trees to all helpers!

Very soon, there was a long queue of animals at Blacky’s door. Blacky was excited to see them.

“If your promise turns out to be false, we’ll bury you right here in this ground. To get a tree on which money grows, we can dig not just this piece of land but the entire forest,” Zimba leopard roared.

“Stop worrying about that and quickly start working. We have very little time,” said Blacky, looking up at the cloudy sky.

The animals got out their spades and hoes and began digging. Some removed stones, while others made the surface smooth. The barren, rocky land became a smooth plot, fit for farming.

“Now you all may go home. After exactly two months, you’ll get your money trees,” Blacky thanked the animals and they left.

After they had gone, Blacky sowed seeds of various fruits and vegetables in the soil. After some time, it started raining.

In a few weeks, the whole field was lush green. The grain was swaying in the wind and the place was full of fruits and vegetables.

Blacky took the harvest to the market and sold everything. He kept aside the money and waited. At the end of two months, the animals came to him. “Blacky, where are our money trees?” they asked impatiently.

“They are here, right in front of you. Why don’t you see for yourself?” Blacky showed them the swaying plants. “And yes, money has already started growing on these trees. Here it is.” 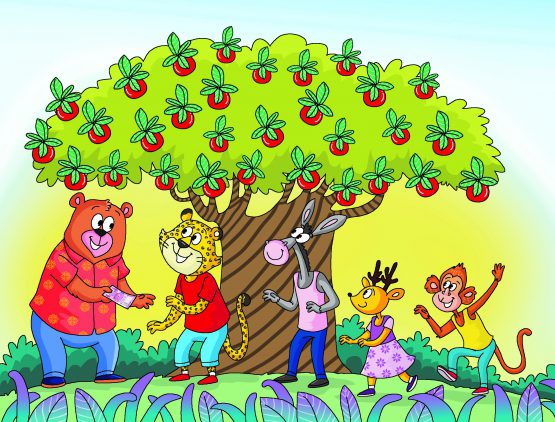 Blacky distributed the profits he made by selling the crop. The animals now understood that the flowers and fruits that grew on trees are what got converted into money trees and that hard work is the first step to success.

The story is very interesting 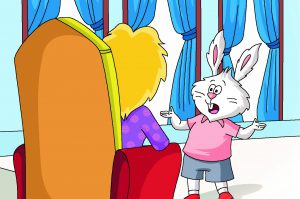 Wise Cheeku
Find out how Cheeku helped control the spread of an epidemic?