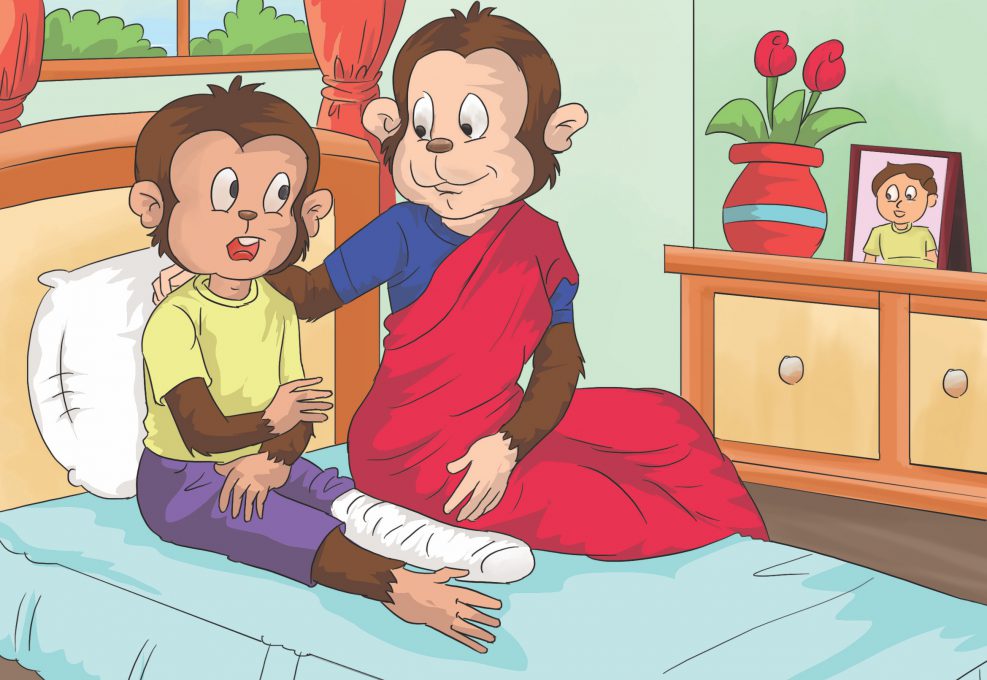 One day Monu monkey found a mobile phone in the forest. Monu was excited to find the phone and jumped across to give the news to his friends. But first, he thought of taking a selfie or his own picture with his new mobile.

He switched on the camera, scrunched up his nose and face and took a selfie. He then showed the selfie to his friends and offered to take a selfie with them too.

All his friends praised his picture. Monu was filled with joy to hear this. He thought that he had found a priceless gift. Now, all his friends would do his work, as he would offer to take their pictures.

But Monu’s mother knew that Monu was wasting a lot of his time in taking pictures and was not finishing his studies or helping her with housework.

One day when Monu returned from the forest, mother said, “Monu, you’re just busy going to dangerous places in the forest to take selfies. I am really worried about this. You need to pay attention to your studies. If something untoward takes place, what will happen? You need to think about what you’re doing.”

“Ma, you worry unnecessarily. I am not a kid anymore. I can easily differentiate between right and wrong. You be assured, I can take care of myself,” replied Monu and turned a deaf ear to what ma had said.

Monu became crazy for taking selfies in dangerous places and the praises his friends showered on him, added fuel to this fire.

He had become so bold that he would not think twice to take a selfie near a lion, even. It was common for him to climb on the backs of elephants or giraffes and take selfies.

He was so addicted to taking selfies that he thought himself to be the selfie professional of the whole forest.

Not only did he take selfies better than any other animal, he demanded appreciation from friends all the time. Most of his friends were now fed up with his habit. 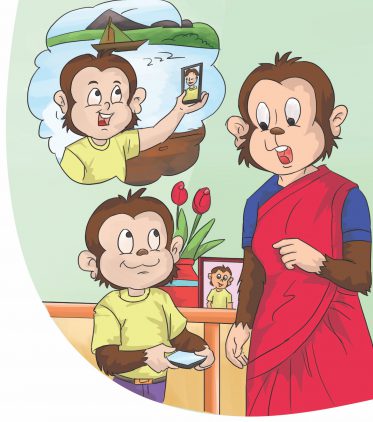 One day Monu thought of taking a selfie from the branch of the tallest tree of the forest. One could view the beauty of the whole forest from there.

He climbed the top most branch of that tree to take a unique selfie. He held the mobile in one of his forelegs, the branch with the other and posed for a selfie, hanging in the air. He was having fun clicking selfies in various poses. But the branch couldn’t bear his weight.

It broke from the tree with a loud crack. Monu fell hitting the branches of the tree, on the ground with a thud and lost his senses with a loud cry.

On hearing his cry, some animals near the tree came running there. Seeing him lying unconscious, they took him to Dr. Gajju elephant immediately. 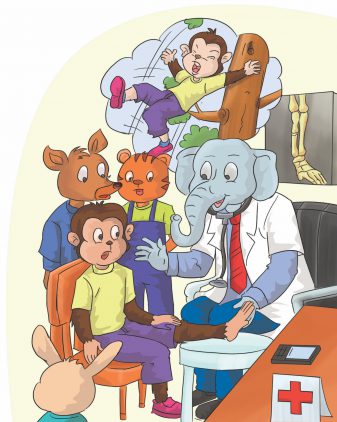 Dr. Gajju examined him and said that he was seriously injured and had fractured his legs. Monu needed to rest for two months.

Monu’s mother, too reached Dr. Gajju’s clinic. She was crying because Monu was hurt and unconscious.

Monu became conscious and realized that his mother was crying. He cried in pain and said, “Ma, please forgive me. I will listen to you and promise not to take selfies all the time. I will not touch the mobile again.” 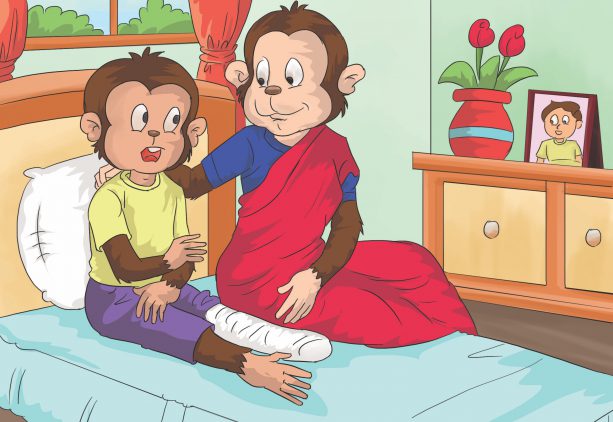 Monu’s mother hugged him and said, “My child, the mobile has nothing to do with this. You had started to misuse the mobile by putting your life in danger, by taking selfies in dangerous places. That’s why you met with an accident. You escaped with minor wounds and your life is out of danger; this is a great lesson for you.”

Monu learnt a lesson from his mother and decided to leave the addiction of taking selfies. But all his friends gathered there and took one last selfie with Monu lying on the bed, with plaster on his leg, to remind him to be careful!