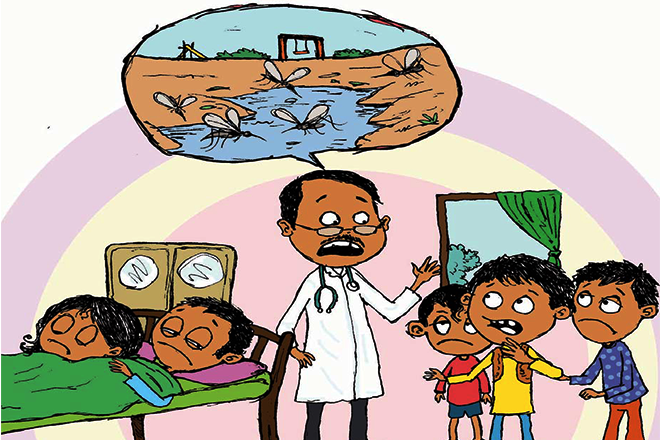 Neel and his friends were waiting for siblings Jay and Khushi to join them at the colony park. After waiting a while, the kids decided to go to their house to call them.

When Neel knocked on the door, the siblings’ mother, Reena aunty opened the door and invited them in. Inside, they saw Jay and Khushi lying on the bed while being attended to by the neighbourhood physician, Dr. Kumar.

“What happened to them, Aunty?” asked Neel concerned.

“They fell ill after they came home from the park last evening,” replied Reena aunty.

“Do you know why they fell ill?” Dr. Kumar asked the kids. “It is because of the lack of cleanliness in your society, especially in the park where you play. There is garbage everywhere, old tyres and plastic bottles are discarded in the park. It is the perfect environment for germs to thrive.”

“You are right, Dr. Kumar. Also, water gets collected in the puddles, as well as, inside the discarded tyres and coconut shells where mosquitos breed,” said Reena aunty.

“Mosquitos are the main transmitters of diseases such as dengue and malaria. You kids should stay away from the park,” advised Dr. Kumar.

In the evening, Neel told his father about Dr. Kumar’s advice against playing in the park.

“But Dad, the park is the only open space we have to play in. If we cannot play there, where else can we go?” asked Neel.

“Our society has a committee that is supposed to look into these issues but no one seems to have the time. Only if someone comes forward and starts something, will everyone else join. That is the problem,” said Neel’s father.

Next day, after school, Neel and his friends met to discuss the situation.

“Since the adults don’t seem to have the time, it is up to us to do something to clean up our society. Otherwise, we will not be able to play without our parents worrying about us falling ill,” said Neel.

“You are right. Let’s first start by clearing the scrap materials lying around. I will ask my mother to call up the scrap vendor who comes to our house to collect the old newspapers and bottles,” suggested Nina.

“That’s a good idea. Meanwhile, we will talk to the committee and get their permission,” said Neel. The kids met the following evening and sold all the scrap material to the vendor.

“We got a good amount of money from selling all that scrap. But this may not be enough to continue with our plan,” said Kevin.

So, the kids decided to pool their pocket money and the savings from their piggy banks.

The money the kids had collected was insufficient to cover all the expenses, but Jay’s father was impressed by their initiative and agreed to contribute some money. A few other parents came forward to contribute money as well.

That Sunday, the residents of the colony woke up to a cleaner neighbourhood. The roads were fixed, the pavement was cleaned, there were dustbins placed every few metres and signs asking the residents to keep the society clean were put up. Though the residents knew that the kids had been working on cleaning up the society, they were pleasantly surprised by the results. In the evening, the committee convened a meeting and appreciated all the kids.

They also promised to take efforts to upkeep the cleanliness. The kids were happy that their efforts had paid off, more so because they could now play in the park without worrying about falling ill.