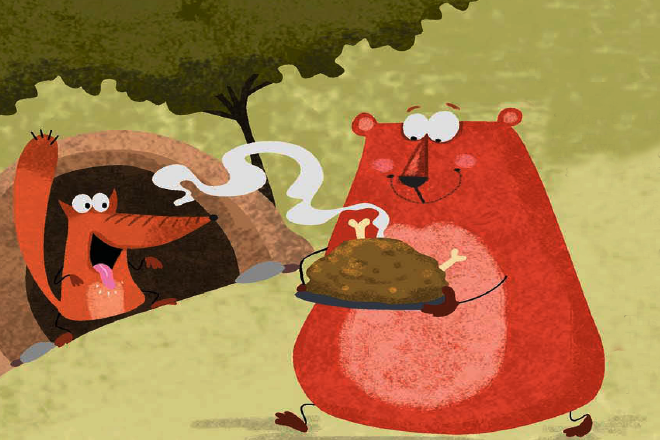 One morning, Bimpy, the fox climbed out of her den. She was hungry and off in the distance, saw Bholu, the bear. He had a big chunk of meat with him and Bimpy, feeling greedy wanted to eat it up. As she wondered how she was going to take the piece of meat from him, She remembered that Bholu was a kind bear. He could not see anyone in misery and can’t stop himself in helping them.

Bimpy sat down under a tree and pretended to feel unwell and weak. As Bholu passed by, he saw that she looked terrible and asked if she was alright.

“What’s the matter Bimpy?” asked Bholu. “Are you not feeling well?”

“What can I say, Bholu? I haven’t been keeping well lately and wasn’t able to find any food of my own. Now, I’ve grown so weak that I can barely move. Oh, what I would do to have a bite of some fresh meat,” she said and collapsed against the tree.

Bholu felt bad seeing Bimpy in this state. He gave her his piece of meat and wished her well.

This was the easiest meal Bimpy had ever eaten and realised that her plan was foolproof. The next day, as Lambu, the jackal was going home after a successful hunt, she played the same act and paraded around him, looking pathetic. Taking pity on her, Lambu gave her his catch for the day and went on his way.

Soon, this became a habit for Bimpy and she routinely took advantage of the kindness of strangers. As the days passed, Bimpy grew out of shape and her legs ached if she walked too much or ran too fast.

One day, a mouse walked past her and she could barely keep with it, let alone catch it. She was thoroughly out of breath and truly unwell. By then, the animals of the forest had grown weary of her act and stopped walking past her den. Bimpy hadn’t eaten in several days and desperately needed help.

Fortunately, the jungle’s doctor, Pinchu, the giraffe, happened to pass by. He immediately understood that Bimpy needed his help and took her to his clinic. Bimpy was put on a drip and was fed lots of vitamin and mineral tablets.

When she began to feel a little better, Dr. Pinchu began serving her regular meals and put her on a strict exercise regimen. As the days passed, Bimpy began to feel better. A few days later, it was time for her to be discharged.

Feeling better than ever, Bimpy was about to go home when Dr. Pinchu had a word with her. “Your health has improved tremendously, Bimpy. It goes to show how important regular exercise and a proper meal can do to improve a person’s help. If an animal keeps in mind the importance of doing your work on your own, we’ll all be healthy,” said Dr. Pinchu.

Bimpy understood the true meaning behind these words. She promised to never take advantage of the kindness of strangers and to always do her own work.