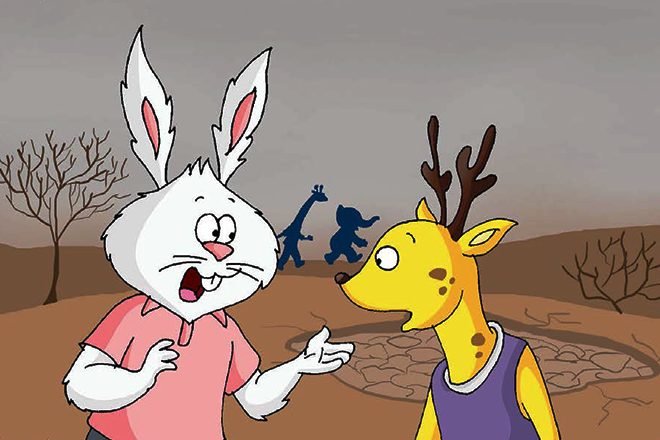 Summer was at its peak in Champakvan and all the greenery had disappeared. Bushes were reduced to twigs and the leaves that were once green had fallen to the ground. The ponds had dried up and fast-flowing streams were reduced to trickles of muddy water. The sky was dusty and grey with not even a single patch of cloud.

Most of the herbivores had migrated in search of greener pastures and Cheeku, the rabbit was wondering if he should follow them too.

A rumor was floating around Champakyan. Animals spoke of a bush with fresh, green leaves. The only catch was that the animals that were last seen approaching it were never seen again.

Dina, the deer, was a dear friend of Cheeku’s. One morning when they met, she asked, “Do you think it’s safe to go near the evergreen bush? I haven’t eaten any green leaves in so long.”

“My deer friend,” said Cheeku. “I’d warn you against it. There seems to be something fishy about that bush. Why don’t you give me a day and I’ll get to the bottom of this.”

Dina was feeling very hungry, so despite Cheeku warning her, she went straight to the evergreen bush. When Cheeku heard that Dina was heading the direction of the bush, he rushed over there as fast as he could.

Sadly, he was too late. Just as he reached the spot, he saw Dina disappear in to the bush.

Cheeku was afraid. Not only was he scared to approach the bush, he was also afraid he might have lost Dina forever. He watched the bush from a distance when suddenly he got an idea.

He went up to Uncle Horn, the rhinoceros and said, “Hey Uncle Horn, all the animals in the forest were talking about that mysterious bush. They all started saying how even you are too scared to approach it. When I stepped in to defend you, they started calling you a coward.” Cheeku knew that Uncle Horn was very proud and had a bit of a temper too.

“What? How dare they call me a coward?” growled Uncle Horn. “I’ll show them!” Uncle Horn and Cheeku went to the bush, and Uncle Horn charged it with all his strength. He knocked it over and began tearing it apart with his horn. When Uncle Horn calmed down, Wily, the wolf crawled out from inside the bush

“I knew there was something fishy about that bush!” cried Cheeku.

Help me, help me!” said a voice from where the bush was before.

When Cheeku moved in closer, he saw Dina, all tied up, at the bottom of a pit. Cheeku realized what had been happening all this while. Wily had dug a deep pit under the bush and would pull in any animal that would come near. He would tie them up and take them away later.

With Dina rescued and Wily chased away, Cheeku, Jumbo and Dina munched on some yummy green leaves, and shared it with the other animals that would come that way.

With so many animals here, Cheeku told them that they should all work together and dig wells so that they could find water and make Champakvan green again. That way there would always be green bushes for everyone to enjoy.