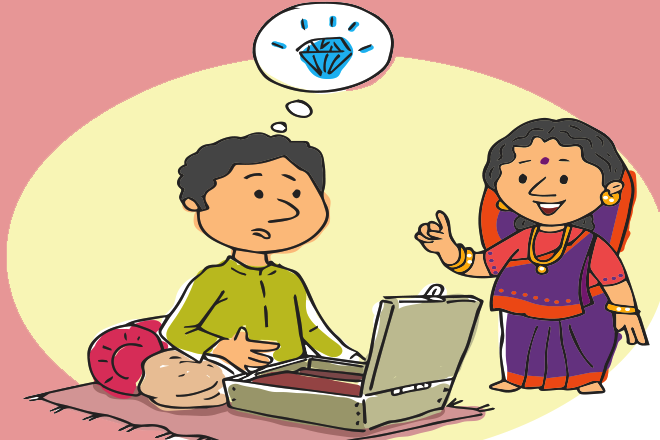 The kingdom of Rajpur was ruled by King Aditya Prathap Singh. He was a wise and just ruler who took care of his people. The citizens of Rajpur respected King Aditya and looked up to him.

A wealthy merchant named Gopal and his wife Meena were known to be a kind and generous couple in the kingdom.

One day, Gopal and Meena had to travel out of town urgently. Gopal was worried about the safety of a diamond that had been in his family for generations.

“We cannot leave the diamond behind at home. What if someone breaks in and steals it?” said Meena.

“But who do we leave it with? The person has to be trustworthy,” said Gopal.

“Our neighbour Sumesh is a good person and he is your friend as well. He is one man we can trust the diamond with,” said Meena.

“You are right. In all the years that I have known him, he has only been nice and helpful to us,” agreed Gopal.

Gopal placed the diamond in a small red pouch and carried it along to Sumesh’s house.

“Sumesh, will you please do me a favour?” asked Gopal. “Anything for you, my friend. Just name it,” said Sumesh.

“My wife and I are going out of town to visit my aunt who is unwell. We may be gone for a couple of weeks. Could you please keep this diamond with you for safekeeping? As you know, this is my ancestral property and you are the only one I can trust it with,” said Gopal.

“Don’t worry, Gopal. I will keep your diamond safe. I will guard it with my life,” assured Sumesh. “Thank you, Sumesh!” said Gopal.

A couple of weeks later, Gopal and his wife Meena returned to Rajpur. Gopal went to Sumesh’s house to collect his diamond.

“Come in, Gopal. How is your aunt’health?” enquired Sumesh.

“She is feeling much better now. Thank you,” replied Gopal.

“Good! So, tell me, what brings you here?” asked Sumesh.

“I have come to take my diamond back. Thank you for taking care of it in my absence,” said Gopal. “What diamond? What are you talking about?” said a surprised Sumesh.

“The diamond that I had entrusted to you the day before I left town,” said Gopal.

“You are mistaken, my friend. You did not give me any diamond. You asked me to take care of your house, which I did,” said Sumesh.

It struck Gopal that Sumesh was cheating him by lying about the diamond. Before Sumesh could stop him, Gopal ran towards “King Aditya will decide who is telling the truth and who is lying. Come with me to the court,” said Gopal.

At the court, Gopal and Sumesh narrated their sides of the story. King Aditya listened to them attentively. After much thought, he said, “I will give you my decision after three days. Till then, this diamond shall remain in my custody.” That night, King Aditya took the diamond out of the pouch and began to wonder who was telling the truth. As he was fiddling with it, he noticed that the diamond had a nice fragrance.

“What a nice smell! Smells like sandal and rose,” King Aditya thought to himself. He smelled the bag in which the diamond was kept, and it had the same fragrance. Just then, he had an idea.

Next morning, King Aditya disguised himself and went over to Sumesh’s house.

“Sir, I am a special officer sent by the King to investigate the diamond case Could you please tell me your side of the story?” requested King Aditya.

“Of course, Sir. I bought the diamond from the jeweller three days ago by paying 5000 gold coins from my savings. But that greedy Gopal wants to steal my diamond. If you don’t believe me, you can ask the jeweller,” said Sumesh.

With Sumesh’s permission, King Aditya searched the house but he did not find anything that could explain the fragrance on the diamond. He then left for Gopal’s house.

“Sir, I am a special officer assigned to this case. Can you tell me about the diamond that you claim is yours?” King Aditya asked Gopal.

“I don’t know where the diamond is from because it has been in my family for generations. Before my father passed away, he gave me the diamond in a box and asked me to keep it safe. But I have failed to do so,” said Gopal sadly.

“Can I see the box that your father had given you?” asked King Aditya.

Gopal handed him the box.

King Aditya could immediately make out that the box was made of sandalwood and had the same smell as that of the diamond. He opened the box and found a few dried rose petals in it. Everything made sense now.

“May I keep this box?” asked King Aditya

After assuring Gopal that justice would be done, King Aditya left for the palace.

On the day of judgement, Gopal and Sumesh were present in the court, besides the jeweller and some members of the public. Everyone was sure that Sumesh was innocent as he had the jeweller to testify his claim, while Gopal had no witnesses.

“I have come to the conclusion that the diamond belongs to Gopal. Sumesh is the liar!” announced King Aditya.

Everyone, except Gopal, was shocked.

“But sir, how did you come to that conclusion?” asked one of the ministers.

“The diamond and the red pouch had the a fragrance of sandal and rose. When I had gone to both their homes, Gopal told me about the box in which he had kept the diamond. The box is made of sandalwood and there were rose petals inside it. This made it clear to me that Gopal was the real owner of the diamond, as I had not mentioned to him about the scent earlier,” explained Aditya.

Sumesh became scared and confessed to his misdeed. “Forgive me, Sir! I became greedy on seeing the diamond and came up with a plot to keep it with me. I bribed the jeweller with 300 gold coins to validate my story about buying the diamond from him. Please forgive me,” Sumesh pleaded.

“As punishment for your greed and breaking a person’s trust, I sentence you to one year in prison and levy a fine of 2000 gold coins. The jeweller too will pay a fine of 1000 gold coins,” ordered Aditya.

Everyone hailed the King’s decision. Gopal got back his precious diamond and went back home a happy man.