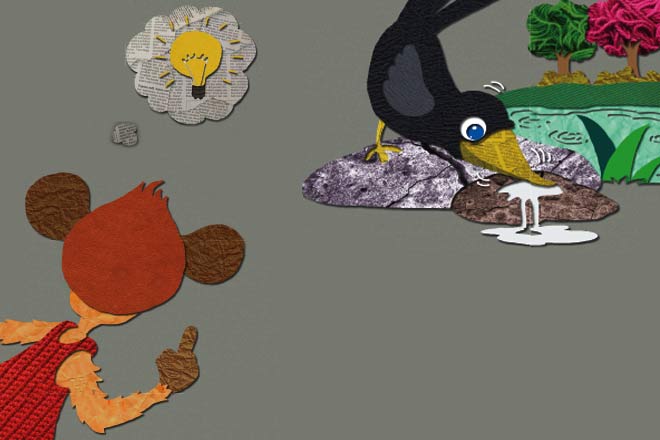 Sundarvan’s King Shaatir Lion was very fond of poems. He would reward anyone who recited even average poems.

When Bunky Monkey came to know this, she said to her husband, Beeru Monkey, “You should go and narrate a poem to get the reward from the king.”

Beeru said, “That’s fine, but the problem is I don’t know any poem.  What will I say in front of the king?”

Bunky was clever. She suggested, “While going there, just narrate whatever you see on the way, in the form of a poem. Be confident. You will definitely be rewarded.”

Beeru liked her suggestion. He immediately set out for the king’s palace.

On the way, he saw a crow sitting on a rock, near the pond. He was repeatedly filling water in his beak, pouring it on the rock and rubbing it with his beak.  Beeru instantly made up a poem.

After creating the poem, Beeru felt good. He went to the palace. He narrated his poem in front of the king. The king appreciated his effort. He rewarded him suitably.

The king’s minister, Lukkhu Hyena, wanted to kill the king. He wished to become king himself.

The king’s barber, Blacky Bear, was also involved in this conspiracy. Lukkhu had made a plan.

When Blacky would go to the palace to shave the king’s beard the next day, he would slit his throat with the razor.

Blacky, as per the plan, did reach the palace. However, he couldn’t muster the courage to kill King Shaatir. He kept pouring water on the slab and rubbing the razor against it.

Seeing him do so, again and again, King Shaatir remembered the poem that he had heard from Beeru the day before. He repeated that poem Blacky was stunned when he heard these words from King Shaatir. He fell at the king’s feet. He pleaded, “Maharaj, I am innocent. Minister Lukkhu Hyena asked me to do this. Please forgive me. I am not at fault.”

The king was taken aback by Blacky’s words. Blacky revealed the entire plan. The king set him free. He ordered that Lukkhu should be arrested. He punished him for his deeds. The king received Beeru in his palace with great respect. He told him how his poem had saved his life. The king applauded Beeru. He gave him credit for saving his life through his poem. He gave Beeru very high remuneration. This ended all of Beeru’s problems.