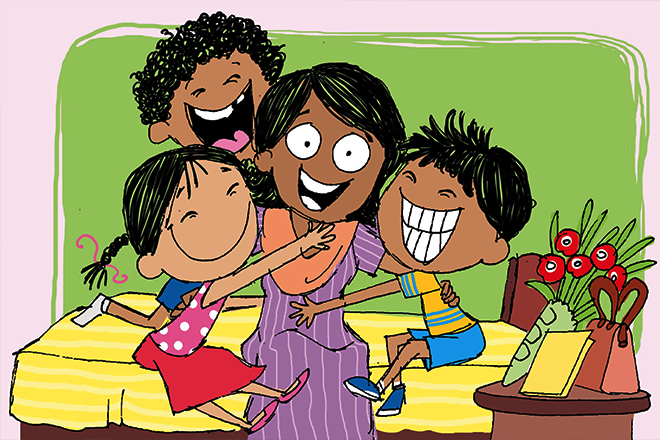 Laksh, Chirag and Peehu loved each other, but they were always up to some mischief. The moment their mother returned from work, other children would gather around her complaining about the three of them. Their mother would explain to them why troubling others was not a good thing, they would never heed her words. One evening, when Laksh’s friend Hari was showing him his new cycle, Laksh said, “Unless you let me take your cycle out for a ride I can’t know what it’s like.” As soon as Hari was out of Laksh’s sight, Laksh deflated the rear tyre. Seeing the tyre this way, Laksh began to cry.

“Your cycle is less than a day old, Hari, and it’s broken already,” said Laksh and began laughing. Chirag and Peehu laughed with him.

One day, Chirag punctured his friend Mohit’s football and their mom was forced to buy Mohit a new one.

The kid’s naughtiness was beginning to worry their mother. When she would ask them to help out with the housework, they would make some excuse or another and escape.

During the summer vacations, Mom had to leave early and come late because she had a project to complete. She hardly found time to relax. Because she had a lot of work to do, Chirag began helping her out with a little bit of the housework. He would hang the clothes out to dry, water the plants, collect milk from the milkman and would even pick up a loaf of bread on his way home. But Laksh and Peehu, on the other hand, would spend the entire day watching TV and playing.

One day, their mom suddenly fell ill. Chirag phoned the doctor. After examining her, the doctor prescribed some medicines for her and recommended that she take some rest. Chirag promised that he would take good care of his mom and not let her any work.

“I don’t think you will be able to do all the work alone,” said the Doctor. “Take Laksh and Peehu’s help.” Under mom’s guidance, she even began preparing food. Laksh loved buying vegetables from the market and would serve fresh fruits to his mom every day.

Laksh, Peehu, and Chirag turned over a new leaf. After finishing the housework, they only played for an hour. They had completely stopped playing pranks on the other kids and nobody came over to complain about their antics. Their mother was very happy to see such a change in her kids.

With the medicines the doctor prescribed and the care and affection the kids gave her, their mom recovered. Even after becoming better, the kids continued to help her with the housework.

More From Champak: Animal Mothers of the Wild

Mother’s day was around the corner and the kids wanted to do something special for her. Peehu was good at drawing and suggested that they make her a card. But Laksh and Chirag wanted to give her something else with the card. With the money in their piggy bank, they bought her a beautiful necklace.

On Mother’s day, the three of them placed a card, the handbag and the bouquet near her bed and went back to sleep. When mom saw the Mother’s day card, she became very happy. She went into their room and hugged them tightly. “I received the perfect Mother’s day gift, the day you stopped being naughty, took care of me and started helping me with the housework,” said their mom.

“We love you mummy!” said the kids and hugged her tight.