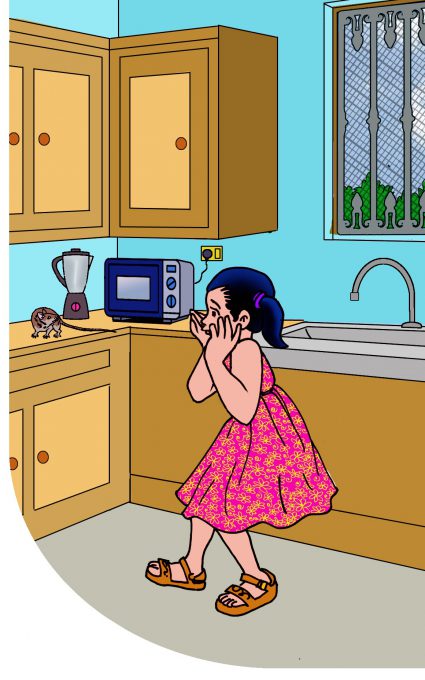 It was a usual Saturday at Suhani’s house. Her father had gone to work in the morning and she was having breakfast.

After eating, Suhani went to the kitchen to drink water and screamed, “Rat! Rat! Ma, there’s a rat in the house.”

Her siblings who were playing in the backyard heard her scream and ran into the house. “What happened, Suhani didi?” asked Jay and Akash, her brothers.

“Come here, quickly. There’s a rat in the house. Chase it away,” said ma who came running out of her bedroom.

Her aunts, Palak and Pari, stood on the sofa, afraid the rat would run over their feet while being chased.

Ma and Suhani pointed towards the cabinet where they last saw the rat.

Jay and Akash quickly took a broom and a stick and forced the rat out of its hiding place.

The rat first ran all around the kitchen, then in the hall, then towards the cupboard and then hid under the bed.

Everyone screamed each time they spotted the rat. The tables in the house were turned upside down to ensure the rat had fewer places to hide.

When Krish and Mohit, aunt Pari’s sons entered the house, they couldn’t stop laughing looking at the chaos.

After about 25 minutes, Jay and Akash managed to shoo the rat outside the house. Then everyone settled down.

Akash and Jay kept the broom and stick aside and sunk into the sofa, exhausted.
“I don’t know who chased whom but it seemed like the rat chased us,” said Jay who was out of breath.

“Yes, we need to ensure we keep the door shut or the rat may come back,” said Suhani.

“I wonder why these creatures exist. They do us no good,” complained Akash.

“Don’t say that, Akash. I know the rats are a menace but they are also an integral part of our life-cycle. They may roam inside our houses and trouble us but that’s because they are looking for food. We should shoo them and not hurt them,” said Jay.

“I don’t think they are an integral part of our life-cycle. We can’t always shoo them away. We should put an end to all rats,” retorted Akash.

“Rats are scavengers. They eat trash or any food that is left unprotected. They have a good sense of taste and can identify certain substances, including rat poisons, after tasting just a little bit of it,” informed Jay.

“Also, a man, inspired by rats, became a billionaire,” he added.

“What? Rats inspired someone?” asked Krish and Mohit together.

“Yes, Mickey Mouse, a beloved character, is a mouse. Walt Disney was inspired by a mouse and created this character that made him a billionaire,” replied Jay. 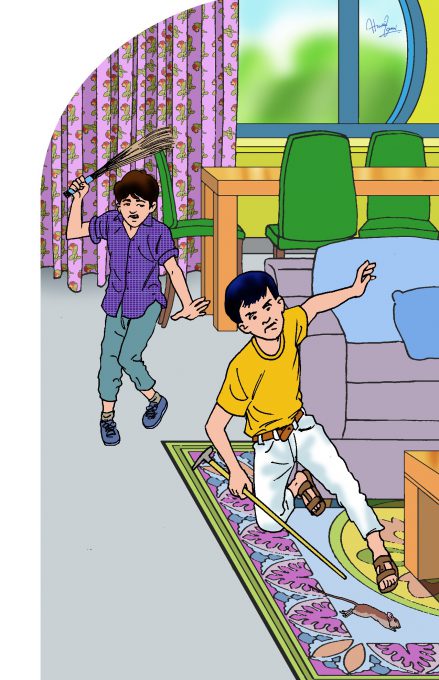 “That’s true. And here I was thinking that rats are only a menace,” said Akash.

“Now, who wants to go out and watch an animated movie?”

“Let’s watch a movie that has rats in it,” giggled Akash.

Everyone laughed, and got ready to watch the movie

2 thoughts on “Mouse In The House”

It’s adorable story and we have learned a lesson from this story we should never put an end to any creatures.