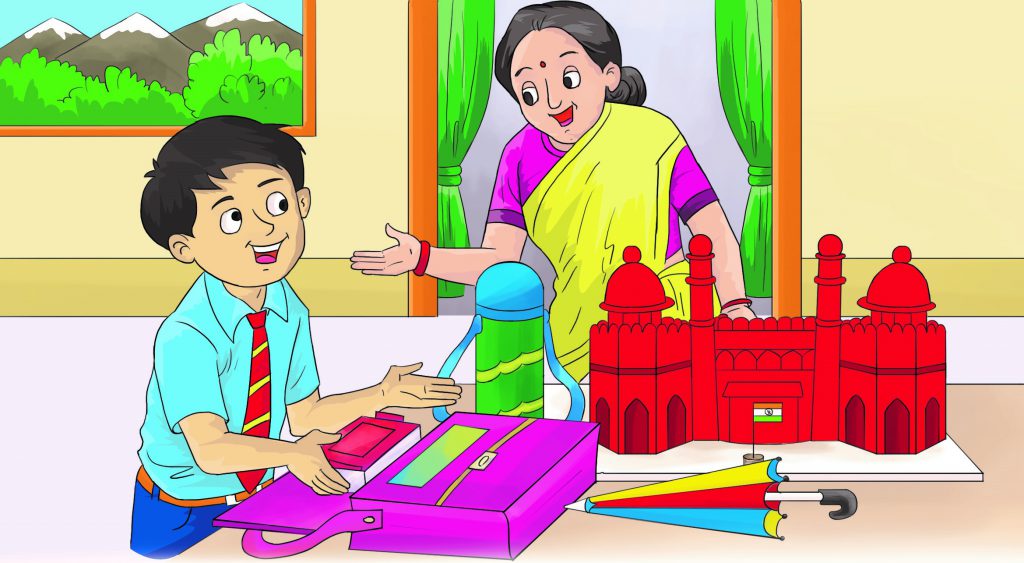 “Mom, hurry up! I am getting late. You will have to drop me at the bus stop today because I have a lot of things with me. I cannot carry them all by myself,” said Raghav, quickly putting his lunch box in his bag.

Raghav’s mom saw that Raghav’s hands were full with his school bag, water bottle, umbrella and a big model of Red Fort for his history project.

“Sending a child to school isn’t easy these days. Schools were so much simpler in our lives. We would run straight to school, near our homes, and needed to carry only books with us. Nowadays, there are so many activities at school. Along with children, even parents are busy,” she murmured to herself. But she couldn’t drop Raghav as she had to leave for work early.

“Son, ask grandpa if he may walk you to the bus stop today,” she said.

Raghav scorned at this idea. “Ask grandpa to drop me at the bus stop?” he mumbled. “Mom does not understand that all my friends make fun of him. I shall better go alone,” he thought.

Ever since grandpa had come to live with them from the village, Raghav had been having a difficult time. 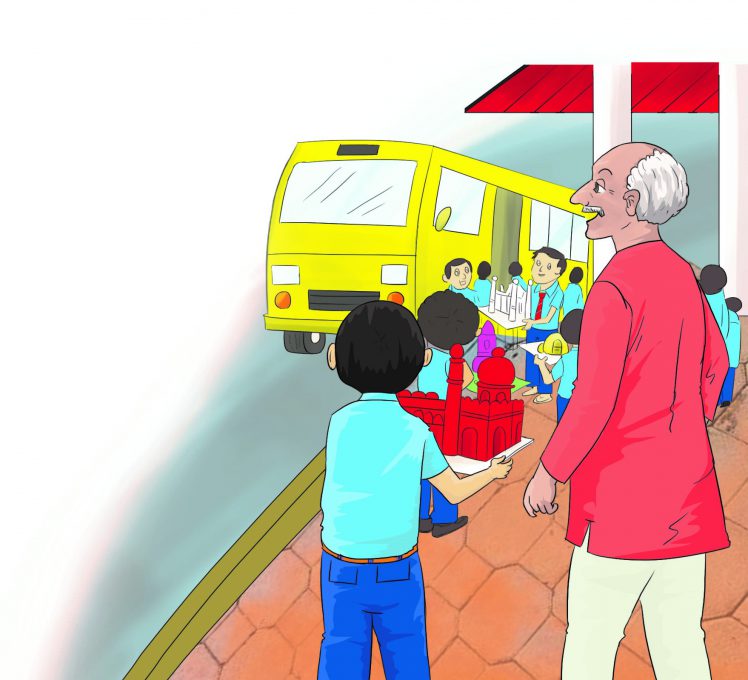 It wasn’t that he didn’t like his grandfather. Like all grandkids, he loved to listen to his stories, chat with him and take his advice. Although grandpa was old, he kept himself updated about the modern world by reading. Raghav loved this about him. From studies to health, grandpa had a solution for everything.

But Raghav was embarrassed by the way his grandpa dressed and spoke. He would always be in his dhoti, kurta and chappals. Grandpa believed in old customs and rituals and he would keep asking Raghav to follow them. Raghav found it strange to greet guests and relatives with a Namaste and folded hands instead of a ‘hello’, but grandpa would insist Raghav did so.

Grandpa also insisted he eat more vegetables and fruits instead of noodles and burgers. He would raise his eyes when Raghav ate those. Raghav did not like this.

He would also discourage Raghav from drinking cold drinks and would always explain to him how cola drinks were harmful for health. This irritated Raghav who often thought it would be better if grandpa went back to his village. He
did not want to be seen with grandpa.

Grandpa was sipping his tea and heard Raghav. “Wait, how will you carry everything alone? The model may break if you are not careful,” said grandpa who instantly put on his kurta, kept his cup of tea aside and got ready to drop Raghav to the bus stop.

With a heavy heart, Raghav walked to the stop with his grandpa. “I hope all my friends are already seated in the bus when we reach the stop so that no one sees grandpa,” thought Raghav all through the way.

However, when Raghav reached the bus stop, he saw his friends standing at the stop, carrying their models and waiting for the school bus.

“What’s the matter Raghav? What made you late! Looks like you have been busy working on the model even in the morning. It is fabulous,” said his friend Shrey.

“The model looks exactly like the Red Fort with our flag flying on it! I am not surprised it’s so perfect. Your grandpa must have helped you,” said Shrey, admiring Raghav’s model.

Grandpa was proud of Raghav and felt moved by Shrey’s words. “Your model of Tower of Pisa is also beautiful, Shrey! However, it is straight. You may tilt it a little and then it would look exactly like the real Leaning Tower of Pisa,” said grandpa.

“You are right grandpa. Once I reach school, I will tilt it slightly. Then it would resemble the real tower, won’t it, grandpa?” thanked Shrey.

“Yes, then it would be perfect,” assured grandpa. Another friend Deepak asked grandpa about his Taj Mahal model. “Very nice, Deepak. It seems Shah Jahan came back to help you build this model!” said grandpa and everyone laughed. 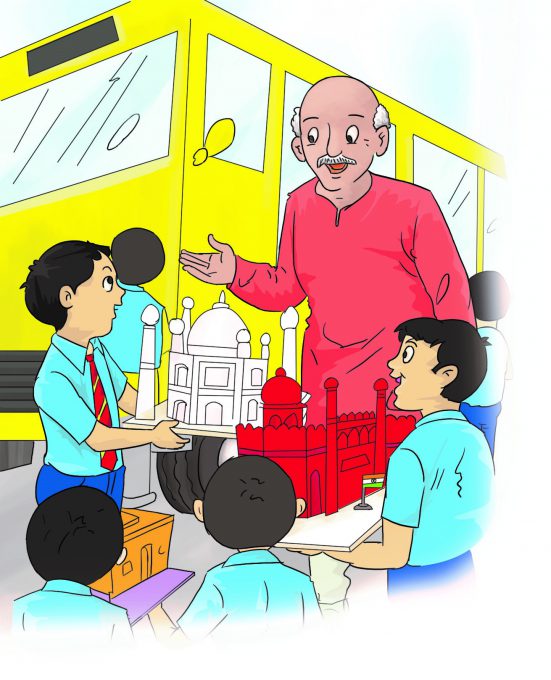 “However, the model looks too white. The marble at Taj Mahal is not pure white. Also, due to pollution over the years, it has brown stains. Efforts are on to clean the stains. So, if you add a bit of brown shade to your model, it will look both real as well as raise awareness about the need for conserving our monuments against pollution,” suggested grandpa.

Deepak listened to grandpa very carefully. “You are a genius, grandpa. I would have never thought of it. I will add a shade of brown to it,” he said and thanked grandpa.

The other children too discussed their models with grandpa. Soon, their school bus arrived. Everybody waved goodbye to grandpa and settled into the bus.

“Now I know why you are so intelligent? You have a great-grandpa,” said Shrey who was sitting next to Raghav.

“Really Raghav, you are very lucky that your grandpa lives with you. I wished my grandfather stayed with us. He lives with my uncle’s family. I miss him a lot. I visit him every summer. I sleep with him in the evenings and he tells me many interesting stories.

Every time he comes here, I ask him to stay with us forever. I wish I had two grandpas, one who could live with my uncle and one who would stay with me forever,” said Deepak wistfully.

Everybody laughed when Deepak said that.

Raghav pondered over all the conversations and his feelings about grandpa. His complaints against grandpa seemed to have vanished! He only thought of grandpa with the love and respect he had when he visited him in their village. He realised his friends were impressed with his grandpa’s intelligence and not how he looked or spoke. 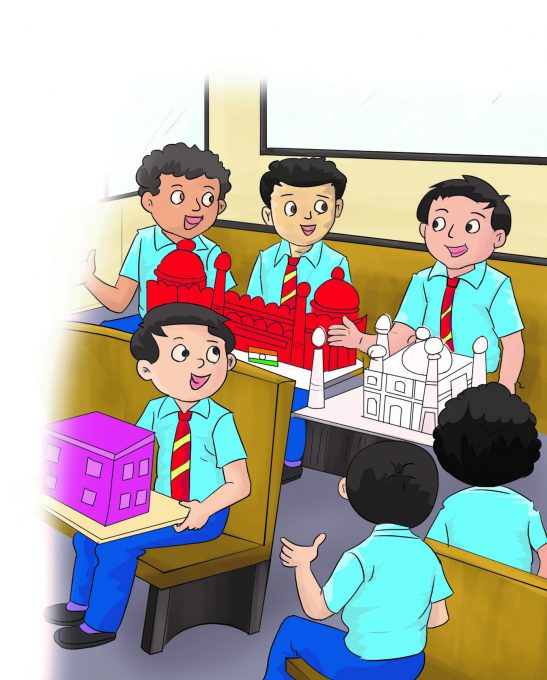 “I was unnecessarily worried about what grandpa wore. I will never be embarrassed of him again. When I return home today, I will tell him not to leave me ever and how much I love him,” thought Raghav and promised not to judge anyone by their appearance

One thought on “Never Judge Anyone”

I love this story. It has a very nice and meaningful content.