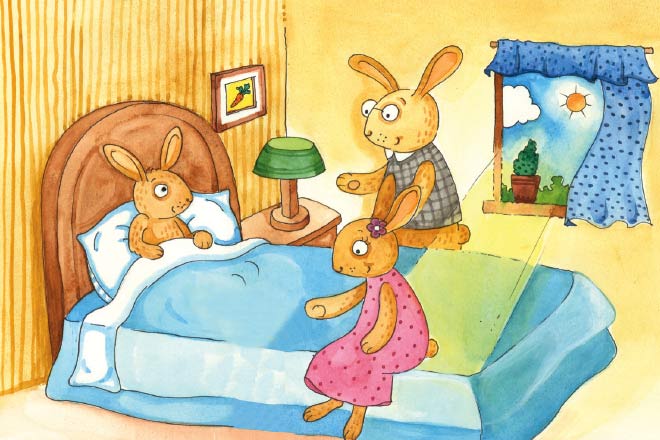 It was a lousy morning. The sunrays were slowly scattering in all the directions. Cheeku, the Rabbit woke up when his room was entirely brightened by the glistening rays of the sun.

Cheeku’s parents entered his room and wished him a Happy New Year. He had forgotten that it was the first of January. His friends had told him that the year 2019 will be a magical year. They had said that every act done on the first day of the year 2019 would be multiplied throughout the year.

Cheeku was an eighth standard student. He woke up late because he had a holiday from school. He took a bath and had his breakfast. His mother was planting a sapling in their garden. He asked his mother about the same and learnt that she had resolved to plant a sapling every year.

Cheeku was impressed by his mother and he too wanted to take a resolution for the New Year. He started thinking about what resolution he should make. Mother suggested that Cheeku should resolve to inculcate some good habits, like getting up early in the morning and studying, doing his homework on time, eating healthy food, etc.

Cheeku liked mother’s suggestions and resolved to do all his work on time. He was lazy and also ate junk food in plenty. Thus he also decided to eat healthy food and always be active.

It was not easy for Cheeku to live up to the resolutions. The next day he managed to wake up early since he had school in the morning, but he felt lazy to study in the morning. He started doing some reading after his mother encouraged him to study.

Cheeku also found it difficult to shake off his fondness for junk food. Mother helped him this time too. Whenever he asked for junk food like pizza, burger, chopsuey, etc, she gave him carrots, cucumber, spinach and other nutritious fresh vegetables. This made Cheeku feel that his stomach was full and then he couldn’t gorge on junk food.

Mother was impressed by Cheeku’s resolutions and helped him to devote appropriate time to study as well as play. Cheeku and his friends initially created a lot of nuisance in the house, but now Cheeku had become much disciplined.

It is said that it takes 21 days to form a habit. This means that if one practices an activity for 21 days at a stretch, it automatically becomes his habit.

It was more than 21 days that Cheeku was practicing good habits. All his friends were surprised at his disciplined behavior. Cheeku too observed that by doing everything on time, he got sufficient time to play. He started excelling in his studies. Subjects like algebra and geometry which were a scare for him previously were now very interesting. One day, Cheeku recited his self-composed poem in front of his school teacher. His teacher liked the poem and praised Cheeku. All the students also congratulated him. Everything was going well with Cheeku ever since the New Year started. He secured a rank amongst the top students in his class. He also started to enjoy studying. Cheeku was now considered as one of the clever students of the school.

Cheeku’s parents were very happy with his progress in studies. His friends started inculcating good habits as Cheeku had done. They studied and played at pre-decided timings. In the remaining time, they nurtured the plants that Cheeku’s mother had planted.

Cheeku and his friends also excelled in sports. They won medals and secured places in big tournaments. Their parents were proud of their success and showered praises on them. Cheeku’s mother had planted saplings some time ago which had now grown into plants. In the same way, Cheeku’s resolutions had also grown into a good habit that gave him a happy life. He was now a source of inspiration for all his friends, he was a hero! It was indeed a magical year for Cheeku!