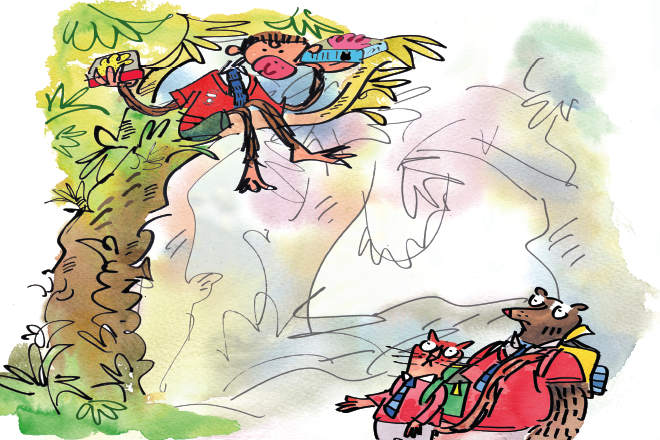 Mandy Monkey was known to be very cunning. All the animals of Champakvan would be reluctant to even talk to him. One day Meesha Cat and Blacky Bear were heading for school when Mandy suddenly came in front of them.

Both panicked wondering what would happen next.

Meanwhile, Mandy craftily took out tiffins from inside their bags and quickly climbed a tree.

Before Meesha and Blacky could react, Mandy made an excuse, “You both are
carrying such heavy bags. I felt like helping you. Please proceed to the school and I will come there with your tiffins.”

Meesha and Blacky believed him and went to school, but Mandy didn’t reach there.

Instead he ate their tiffins all alone.

Mandy would bother the animals in some way or the other and pretended to be
brave. Everybody was irked by him. Champakvan’s king decided that he would
teach Mandy a lesson.

The exam date was approaching. Everyone was busy studying, whereas Mandy
was plotting on how to come first without studying.

He thought of scaring everybody in the name of exams so that if they didn’t prepare well, they wouldn’t secure good marks.

He said to Cory Rabbit who was studying English “Study English later. If you study such a difficult subject before, you will forget it soon.” As soon as Mandy saw Cory studying math, he again brought forth his cunningness and said, “How can you study math now? This is a subject which you can’t understand even on the day of the exam.

In this way Mandy confused and scared everybody.

Now they didn’t know how to prepare for the exam.

One day, Mandy saw Sara Sparrow studying. He went close to her and said, “Study as much as you want, but you can’t beat me. Studying is not so easy. Only smart animals like me can come first.” With these words, he moved on,
leaving Sara perplexed.

With his cunningness he had distracted everyone from their studies. He was now acting high and mighty and believed himself to be the most intelligent animal of the forest. He had even started bullying and scaring the smaller animals.

Days passed. One day, when Champakvan’s King Sher Singh, was not around, an elephant from another jungle came there.

He said, “I will uproot all the trees of Champakvan with my trunk.” Everybody panicked at his threat.

Mandy was the most frightened of all the animals at the prospect of losing his home.

He quickly went to his home and gathered all his belongings. He tried to hide away from the fearsome elephant.

Meanwhile, Bonnie Ant went to the elephant and reasoned with him, “Think before you do something drastic. If you uproot the trees here in Champakvan, somebody can do it in your jungle as well.”

Bonnie said further, “We all should stay friends. If your jungle requires any help in future, then Champakvan will definitely come forward to help you.” The elephant simmered down and gave a smile.

He said to Bonnie, “Don’t worry, I will not harm your forest. I was here on the request of Sher Singh. I did all this only to scare Mandy Monkey.” He also commended Bonnie for her quick thinking and bravery to stand up for her forest mates.

Mandy realised then that confusing and scaring people was not bravery. Distracting them from their studies was not an intelligent thing either.

Real bravery came by behaving in a fearless and responsible manner and intelligence came from studying. He vowed to change his ways.