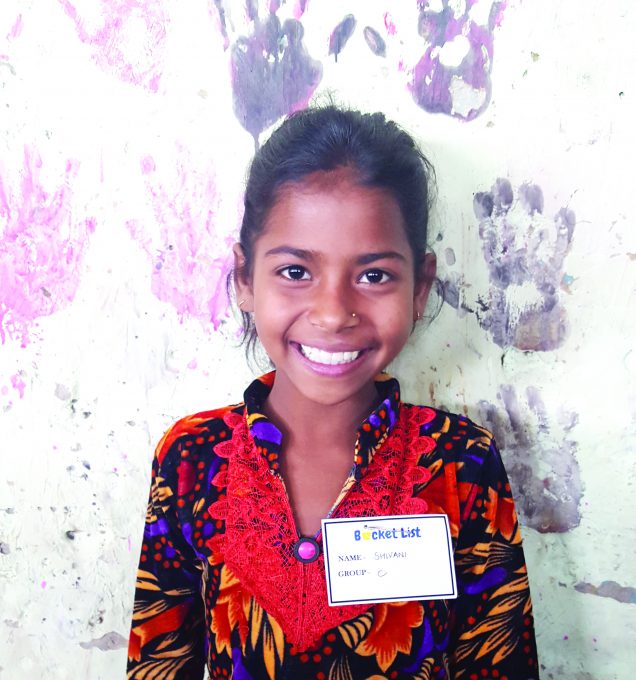 Twelve-year-old Shivani lives under the Jasola flyover in south Delhi. On a usual day, she spends her time making a list of children who cannot get admitted into a school. She explains why going to school is important and what documents are needed for admissions.

“When I was in class 2, I loved going to school: learning different subjects, playing, and spending time with my friends. I used to get up early in the morning and pack my bag and tiffin my mother prepared before she left for work. I would get ready and leave for school with my friends. On the way, we would discuss the new things we learned in school,” says Shivani, who went to a local government school.

Education Denied
But Shivani’s morning routine suddenly changed. One day, her teacher said she couldn’t attend school anymore because her Aadhar card, an identity card issued by the government, carried the address of another locality in Delhi. The rule was that only students from the local area could attend the government school.
Shivani’s parents are construction workers who shift houses regularly and live wherever their work takes them. As they change homes frequently, they don’t have a proof of address, a document that is essential for school admissions in India. But Shivani could not understand why the teacher was asking her to leave school. She repeatedly pleaded with her teacher to allow her inside the classroom so she could study with her friends.

Hopeless Days
Tears ran down her cheeks as she thought of the classes she was missing.
When the school did not listen, Shivani’s parents stopped her from going to school. Her routine changed from studying to household chores. Every day, she would watch her friends go to school and still wonder why she couldn’t go. She kept asking her parents to get the necessary documents that would enable her to go back to school, but since they worked from morning to night, they didn’t have the time to get the documents. But Shivani didn’t give up and kept asking her parents, though they didn’t know how to get the documents.

One day, she heard of a few teachers from an NGO who frequently visited her locality to teach children. Shivani was thrilled and began going there. She was happy she could study without having to submit documents. She spoke to the teachers about her lack of documents and learned how to
get them.

She and her parents were taken by the NGO teachers to a local government Aadhar card camp to update their address proof.

After a few days, Shivani’s Aadhar card was updated. Her address read “Under Jasola flyover,” which now was proof enough for her to rejoin her old school.
She says, “Just because of some documents, I was able to go from class 2 to class 6. I was very happy, but I was afraid that I might have forgotten to read and write.”

Lending a Helping Hand
Now, Shivani helps children like her who don’t have documents. She does this by keeping a record of the children in her locality who don’t go to school and are struggling to get their paperwork done. She then submits this list to the NGO, whose volunteers help the children get their documents in place to ease the process of school admission. Shivani has helped 22 children in her locality get admitted to school. She goes door-to-door, talking to people, spreading awareness on documentation and education. Through street plays and discussions under the flyover, she tells people how girls have to struggle to get an education, a concept deeply rooted in her.

This story was published in the April issue of Highlights Champs.