It was New Year’s Eve. Grandma rabbit was narrating a story to her grandson, Harry.

“And then,” Grandma rabbit continued the story. “My grandpa ran the race against Tippy, the tortoise. Midway, he noticed that Tippy was very slow and far behind. So, grandpa rested under a tree and dozed off. Not someone who gave up easily, Tippy tortoise, slowly and steadily moved past my grandpa, who was still asleep and reached the winning post.”

“But what happened to your grandpa? Did he challenge Tippy to another race?” asked Harry, the curious, young rabbit. 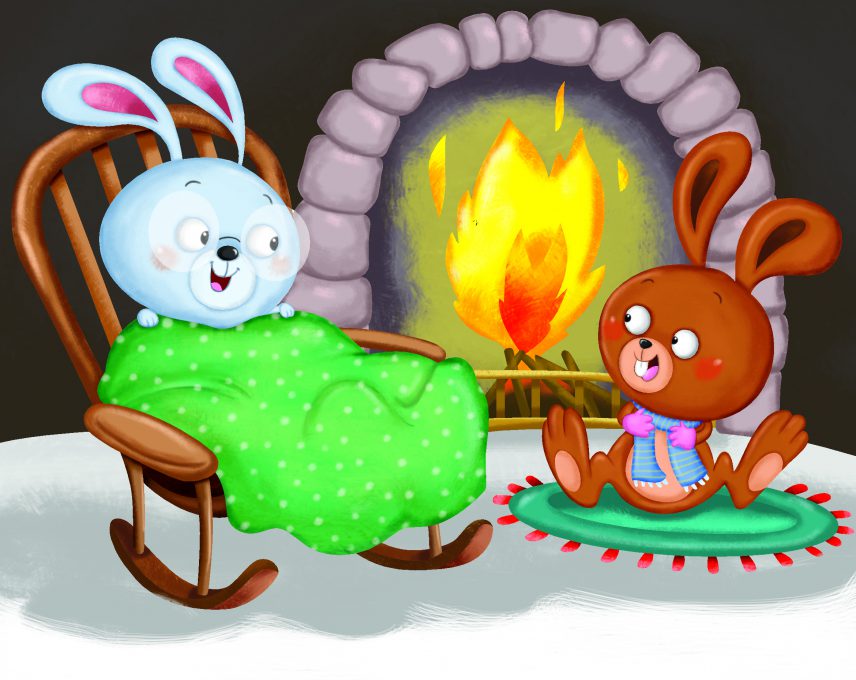 “Oh, nothing much. He woke up much later, realised his mistake and accepted Tippy as the winner,” remarked grandma. “He left us this story which is passed on from generation to generation.”

“Great-great grandpa lost the race because he was careless and lazy. If he had slept after reaching the winning post, there would have been a nice trophy in the shelf up there today,” declared Harry, pointing at the empty shelf on their burrow.

“That is not the point Harry,” said grandma while munching a carrot. “The point is that even if you’re slow, and if you consistently work towards your goal, without ever thinking of quitting, you’re sure to be a winner!”

“I don’t think so,” said Harry. “And grandma, I am going to prove my point before the New Year,” said Harry, hopping out of the burrow.

“Prove your point,” laughed grandma, following Harry. “But never on an empty stomach,” she said handing a bunch of carrots to Harry. “Never skip your breakfast,” she advised and waved at her grandson.

After finishing his delicious meal, Harry walked towards the pond where Tippy lived. Finding Tippy near the edge of the lake, basking in the sun, he shouted. “Tippy uncle, are you ready for yet another competition a running race?”

Tippy’s head appeared out of his hard shell and he looked at Harry. It seemed like he had grown older and wiser. “I am ready to compete, little Harry, but I have a condition,” he said. “Let it not be a hopping or walking race. Instead, let us ask the judges to conduct a competition for longevity.”

Harry heard this without batting an eyelid. Guessing that his tiny visitor did not understand what he said, Tippy continued. “Let us ask the judges to award a prize who lives longer out of the two of us,” he said.

Harry shook his head and shrugged his shoulders. “How can that be?” he snapped. “I know that you tortoises live for more than a hundred years
while we, rabbits, barely live for six years,” he said.

“In that case,” quipped Tippy. “Find someone more suitable to take part in the race.” Then Tippy slowly slid back into his shell to enjoy a quick nap under the warm sun.

A little disappointed, Harry hopped on. It had become too hot in the forest. He saw Shera, the lioness rushing to her den.

“Shera, Shera,” Harry called out and hopped ahead and stood before the lioness. “How about a running race between you and me?” he asked, tapping his paws on the ground.

Shera laughed at Harry’s suggestion. She felt protective about little Harry. So, instead of scaring him, she patted him lightly on his back.

“Harry, I can’t run a race with you. But I have a suggestion. How about a shouting competition? Let us see who is louder.”

Harry stepped back. “How can that be?” he asked lifting his eyebrows. “Every animal in the forest gets frightened when you roar. I cannot take part in that competition,” he said and hopped ahead. He stopped by the river to drink some water. He felt happy when he found Trunkie, the elephant, there. 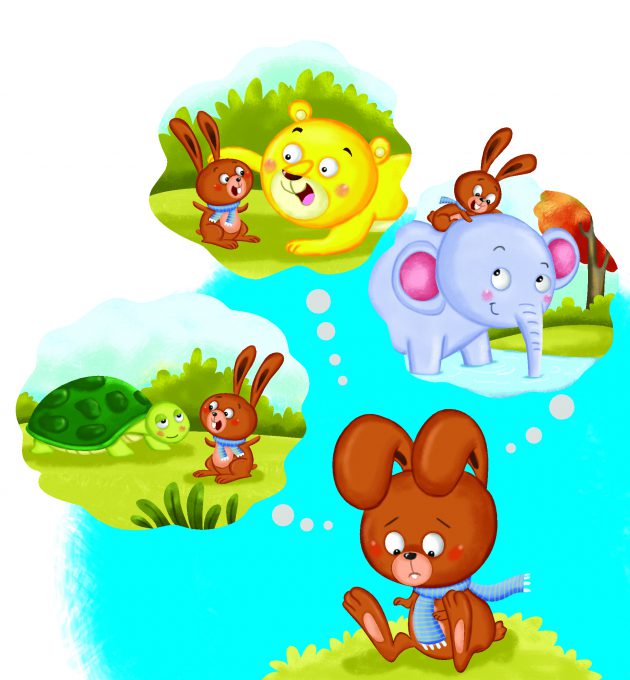 “Trunkie,” he called as he hopped and jumped on to the elephant’s back. “As
you are my friend,” said Harry, “I invite you to take part in a running race with me. The winner will receive a medal from grandma,” he said, hugging the elephant’s neck.

Trunkie smiled indulgently.“A running race with super runner Harry?” he asked. “Let me suggest something else. Let us have a competition about who can fill more water in his mouth.”

Harry hopped down and placed his paws on his waist. “This is cheating, Trunkie. Everyone knows that you have a big trunk and you can fill more water at one go. I can’t compete in such a race with you,” he said and hopped on.

Harry was getting restless. He had to prove his point to grandma before New Year dawned but still he was unable to find any animal ready to take part in the running race with him. But he decided to continue his pursuit. Suddenly, he stopped in his tracks as he felt a sharp tug. Turning back, Harry saw some rabbits, all his classmates, ready to surprise him!

“Harry, are you ready for a race?” asked Montu, the rabbit.

“Yes,” agreed Harry instantly. “And the winning post would be my burrow,” he added. So, all the rabbits set out on a race and Harry won it by just a fraction
of a second!

At the stroke of midnight, Harry told his grandma. “You may be a

right grandma when you said that slow and steady wins the race but I have realised that any race should be only among equals.”