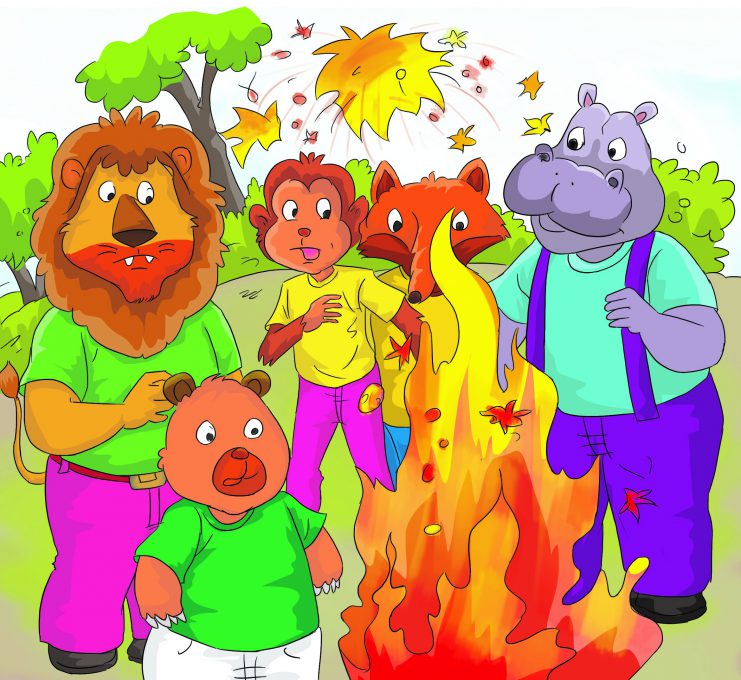 All the animals in Champakvan were really excited. It was the last day of the year and they had planned to have a great show of fireworks that night to bring in the New Year.

Gholu Goat’s shop was literally bursting with fireworks. This year, he had added sweets, fruits, and even balloons. The shop was crowded with last-minute shoppers. Lima Lion was inspecting some flowerpots when crafty Hippo approached him. Hippo said, “These flower pots are great, aren’t they?” Lima nodded. “I think I’ll get a box of these.” 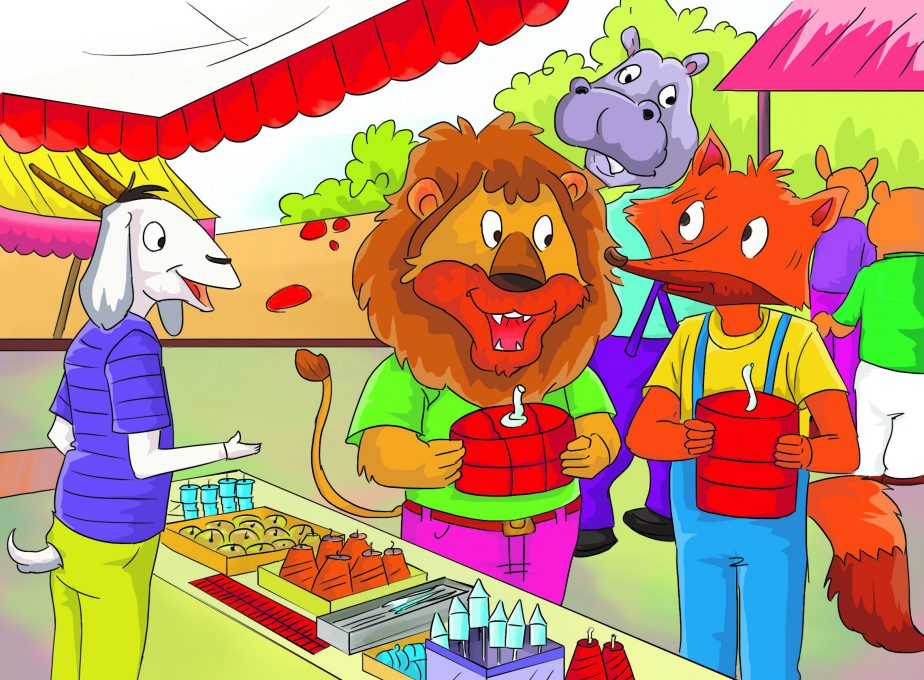 “What?” shouted Hippo. “A person of your stature buying these flowerpots. Those are meant for kids. Now, a lion should be buying the barrage.”

“No animal has so far dared to buy barrage,” said Hippo, pointing to a box that everyone was avoiding.

Lima was doubtful so asked Keera Wolf about these atom bombs. Keera knew what they were and was terrified of them. But he wasn’t going to admit that! So he said: “Oh, those are nothing. You just have to light this end of the wire and stand away. It’s child’s play!”

Lima decided to buy a box. As he paid for the barrage bombs, he spotted Bholu Bear trying to balance four pots of fresh honey. “What’s a New Year party without fresh honey,” said Bholu with a grin. Then he saw the box of barrage bombs Lima was carrying. “You’re quite the brave one, Lima. It’s going to be a resounding New Year with that lot!”

Lima blinked. He understood nothing. Why had he allowed that crafty Hippo to persuade him to buy something he knew nothing about?

But he couldn’t back off now and return the box. After all, he was a lion, known for his bravery! He decided to take the box of bombs to the grand celebrations and set them off there. 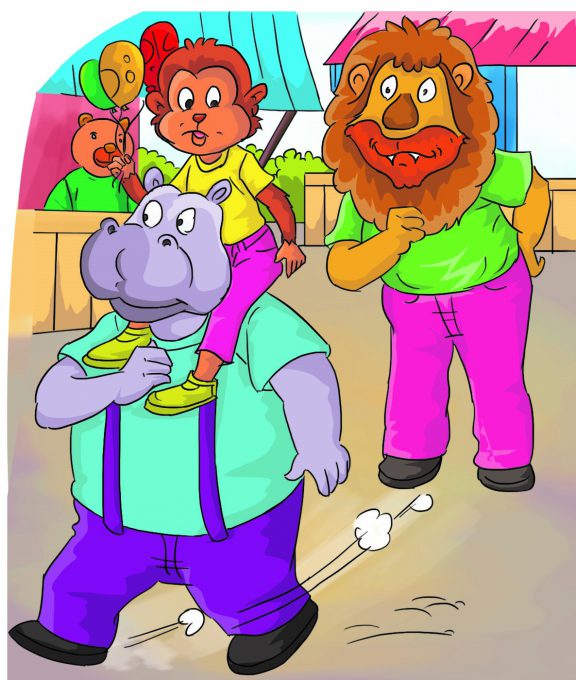 The animals had lit a huge bonfire by the riverside and were waiting for midnight. Excitement was high, and they all counted down together. “10, 9, 8, 7, 6, 5, 4, 3, 2…1 Happy New Year!” Balloons were let off into the night sky, sweets were distributed and everyone was eating and wishing each other.

Bholu’s shirt was sticky with honey, and he was busy mixing honey with the nuts Squeaky Squirrel had given him. Chinchoo Monkey was gorging on guavas someone had given him, and he was thumping his tail on the ground in excitement.

“Everyone, it’s time for fireworks!” shouted Lima. Everyone cheered and began pulling out boxes.

Squeaky took out a pencil cracker and lit it causing it to glow. “Pooh, that is
kid’s stuff. I am going to go for flower pots,” said Bholu and lit them all one by one. Soon the place was illuminated by different kinds of crackers. Rockets soared and chakras spun on the ground making the animals squeal with delight.

Suddenly, a clap rang out. It was Hippo. Everyone quietened down.

Hippo asked, “Aren’t you going to burst your bombs, Lima?”

Lima’s heart skipped a beat and he gulped. He cursed Hippo in his mind and grudgingly took out the box. He opened it nervously and glanced inside at the small green coloured balls with wires wrapped around them.

“Has anyone burst these before?” asked Lima.

All of them shook their heads and Squeaky started shivering in fear. He knew there was going to be a loud noise and he hated loud noises.

Lima with trembling hands and fear were written all over his face placed one down.

Hippo instructed, “Now ignite the end of the wire with a sparkler. That’s all.”

Lima glared and shot back, “Why don’t you show me first and then I will follow?”

Keera handed Hippo an ignited sparkler and asked everyone to step back.

Hippo started quivering like jelly. He slowly went near the bomb, lit the wire, and ran back.

They all closed their ears and some dared to peek but alas, nothing happened!

They all peered at the bomb but it looked like it was dormant.

Hippo didn’t have the nerve to light it again. He handed over the sparkler to Lima, who went cautiously near the bomb. He lit the wire and ran back, but still, nothing happened.

Relieved, Lima said happily, “Looks as though the bombs are a complete dud.”

Saying this, he picked it up and put it back in the box with the unlit bombs.

From the dark, Gholu screamed: “LIMA. Throw the box away. This is dangerous!”

Frightened, Lima flung the box and it landed on the bonfire! In a second or so, there was a huge explosion, as all the bombs went off at once.

The animals froze in terror for a second and then ran away screaming. Hippo led the pack, with Chinchoo clutching for dear life. 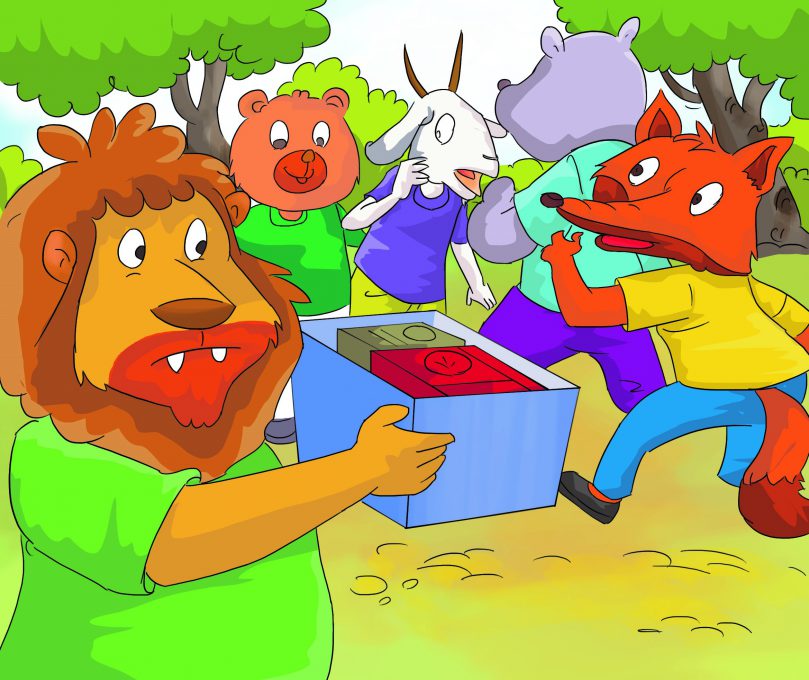 It was a New Year party Champakvan would never forget! and Lima promised never to be swayed by others and buy things he did not know about.

One thought on “Memorable New Year!”