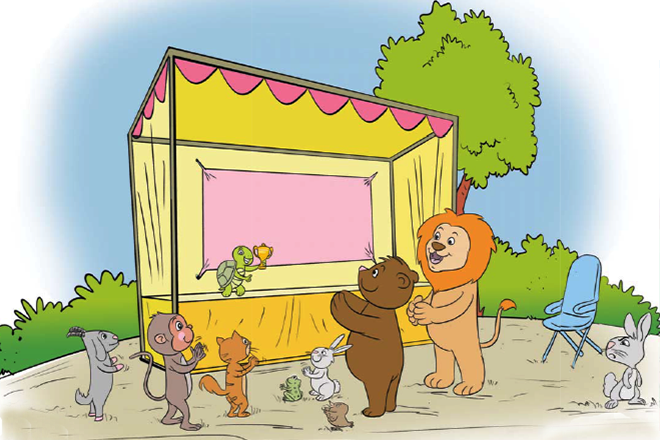 Every year during the summer holidays, various events for children would be organised at Sunshine Woods. All the children eagerly looked forward to them.

Every year, Tito, the little turtle would participate in several events and would win many prizes. Everyone loved Tito because he was humble and always ready to help. His favourite competition was the spelling bee contest. Curled up in his shell amid stacks of books, Tito would learn the spellings of various words every day.

Ricky, a young rabbit, often came second to Tito in the spelling bee contest. He would become upset whenever Tito beat him.

This year, before the events began, Tito had an announcement to make. “I will not be participating in any of the competitions,” he said.

“But why? You are so good in all the events,” said one of his friends.

“I feel it’s about time I let someone else win. Others should also get a chance to win and develop their talents,” explained Tito.

But they still wanted Tito to be a part of the event.

“How about I train the other participants?” he offered.

“That is a good idea! You will be the best person for the job and other kids can learn a lot from you,” his friends agreed.

Tito was excited about his new role as a mentor. Weeks before the event, he chalked out a detailed plan, organised the training materials and sorted kids into different age groups and began training them. All the kids enrolled for the training except Ricky.

Ricky was happy to learn that Tito would not be participating in any of the competitions this year. He knew he would finally be able to win the spelling bee contest.

Soon, it was the day of the competition. Tito’s students were all excited to take part and so was Ricky. As the competition began, Tito sat on a chair close to the stage. He watched and cheered all the participants enthusiastically. At the end of the competition, the names of the winners were announced.

Ricky had won the spelling bee contest! As he walked up on the stage to receive his prize, everyone clapped for him. From the stage, he saw Tito also clapping for him with a big smile on his face.

Just then it struck Ricky that winning alone did not make one popular with others. It was one’s talent and personality that made one liked by all. Ricky felt ashamed of having been jealous of Tito. He had always considered Tito as a competitor and not as a friend. He also had a new found respect for Tito, who instead of just winning and collecting trophies, wanted to share his knowledge and skill with others.

From that day on, Ricky became good friends with Tito, and even offered to help him with his training sessions.