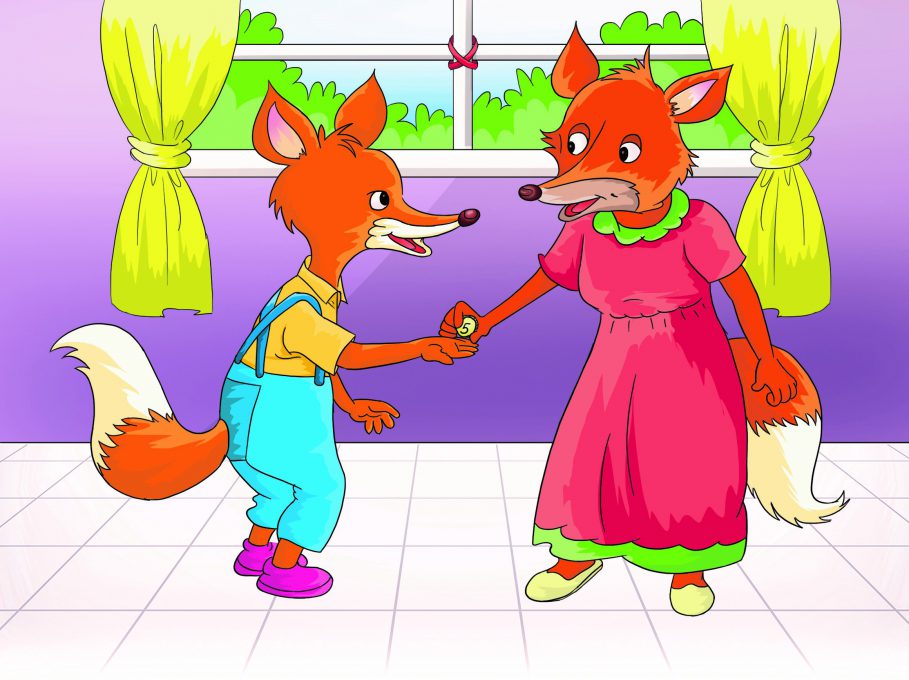 Khainchu mule ran a sweet shop in Gopavan forest. He was an expert confectioner. The aroma from his sweet shop was famous to everyone in Gopavan.

Next to his shop lived Sallu fox. His house would always be filled with the aroma of the sweets and he could never resist them.

One day, when Sallu came out of his bath, the smell of tasty jalebis reached him. “Wow! jalebi!’’ he exclaimed in excitement. He could name the sweet just by its scent!

He started thinking of a plan to gobble jalebis as he put on his clothes.

“What is it?” questioned Sallu’s mother, knowing what Sallu wanted.

“Sallu, you feel like eating sweets daily! But I cannot buy sweets every day.” explained his mother.

“But I saw you keeping some money in the cupboard yesterday. Give me some,” pleaded Sallu.

Not wanting to argue with him any further, his mother took out a few coins from the cupboard and gave them to him. Sallu was disappointed “This can buy me only 100 grams of jalebi,” he said. “Buy whatever you get for this money. Your teeth will decay if you eat too many sweets,” said his mom.

“Fine! I am going,” said Sallu and rushed towards Khainchu mule’s sweet shop.

He was overwhelmed to see the sweets on display! Kalakand, as white as snow, the jar filled with brown balls of Badusha, a bowl full of spongy Rassogullas. His mouth started watering on seeing all of them! Rassogullas were his favourite. He was desperate to eat them but with the money he had, he could only buy jalebis.

Suddenly, he had an idea! “Uncle, can you please give me 100g of jalebis?”
he requested.

As soon as Khainchu went to weigh the jalebi, Sallu moved to the corner where the bowl of Rassogullas was kept. He glanced around, put his hand into the bowl and quickly gobbled up one piece of Rassogulla! However, he didn’t notice that he had also gobbled up a wasp that was sitting on that piece. As Sallu tried to swallow the Rassogulla, the wasp gave him a sharp sting in his throat. Sallu shrieked in pain!

“What’s the matter son?” he asked Khainchu who was concerned by Sallu shrieking. He then saw the Rassogulla and the wasp that Sallu coughed outlying
on the ground and understood what had happened.

“Oh! This is why you screamed. You do have to pay for your misdeeds,” said Khainchu and smiled. 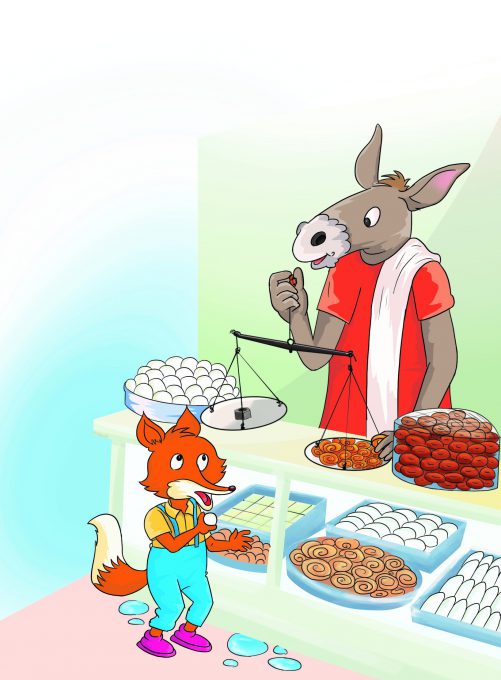 A huge crowd gathered near the shop hearing Sallu scream. All of them broke into laughter when they understood what had happened! Sallu felt ashamed and promised himself that he would never steal anything thereafter.