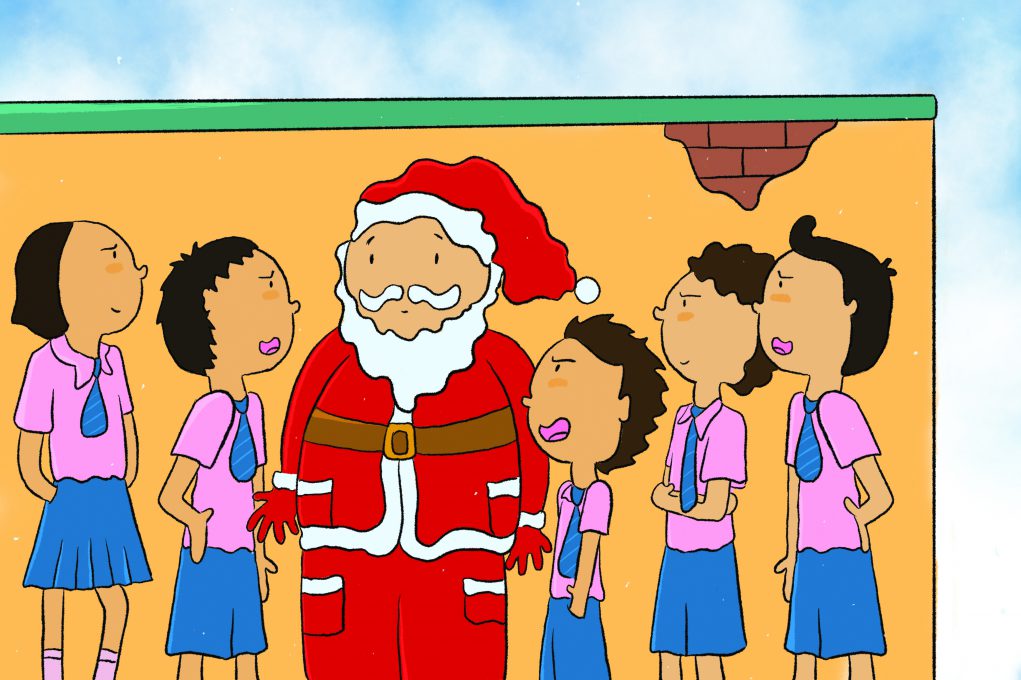 St Peter’s School was buzzing with energy. As Christmas approached the excitement level of children increased.

The children were eager to know who would become Santa this year. Last year, the Headmistress, Ms Nancy, had chosen Zeba to be Santa and she had beautifully played that role.

She had dressed exactly like Santa and had made all the children laugh till their belly’s ached. 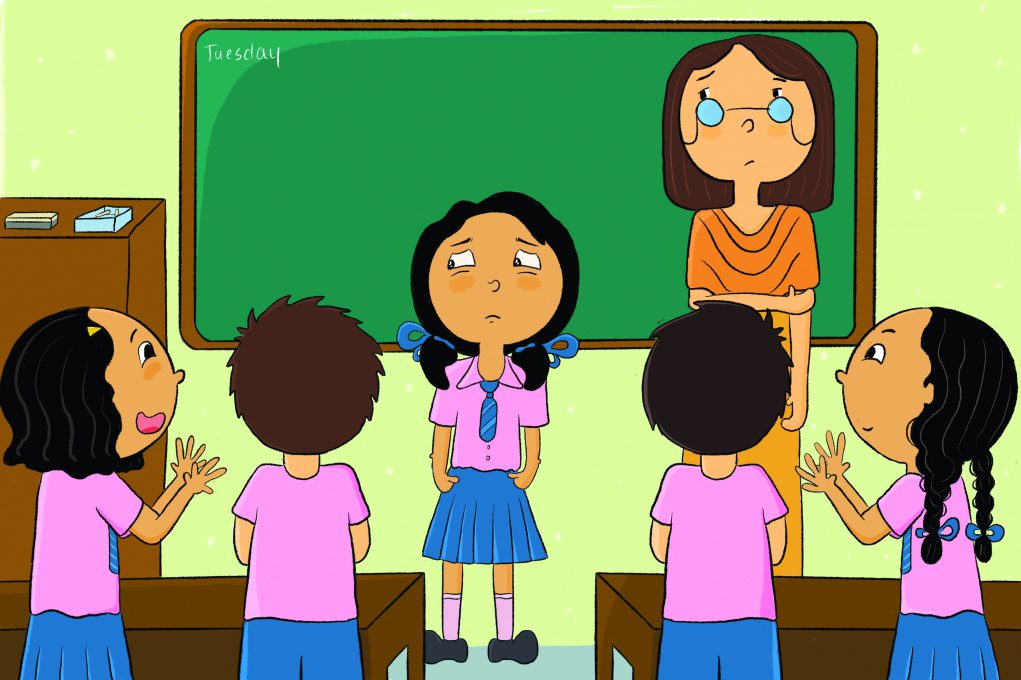 No one knew how and when Zeba had placed the toffees, chocolates, pencils and pens in their bags during the assembly. After that day, everyone started calling
her Santa.

But something had troubled Zeba that day, but she did not tell anyone anything about it.

This year, too, Ms Nancy wanted to choose Zeba as she fit the role perfectly, but when Zeba was selected again, she said, “Ma’am, I am delighted to have
been chosen for the role of Santa again, but….”

“But what, Zeba? Tell me. Is there something you want to say?”

“Ma’am, I love dressing up as Santa. But, I won’t go to the playground as Santa
this time.”

“Why not? Santa normally roams around the entire school,” replied Ms Nancy.

Zeba then told Ms Nancy that hiding away from the teacher’s watchful eyes, some children had forcibly snatched all the toffees and chocolates from her. Afraid that they would trouble her further, Zeba did not complain about the incident.

Ms Nancy smiled sympathetically and said, “Alright, Zeba, you will not go to the playground this year. But Santa will.”

“You don’t have to worry about that Zeba,” she replied, smiling to herself.

Ms Nancy made up her mind on how she would identify naughty children and teach them a lesson.

Christmas was usually celebrated at school on December 24.

Many children made beautiful paintings for Christmas and these were displayed on the corridors of the school, in Ms Nancy’s office, the staff room and in all classrooms.

The Christmas tree was beautifully decorated, and various presents were hung on it for the children who were thrilled to see the tree and the presents.

Soon, the assembly started, and everyone waited impatiently for Santa to come. Zeba arrived shortly dressed as Santa and began distributing gifts amongst the children. 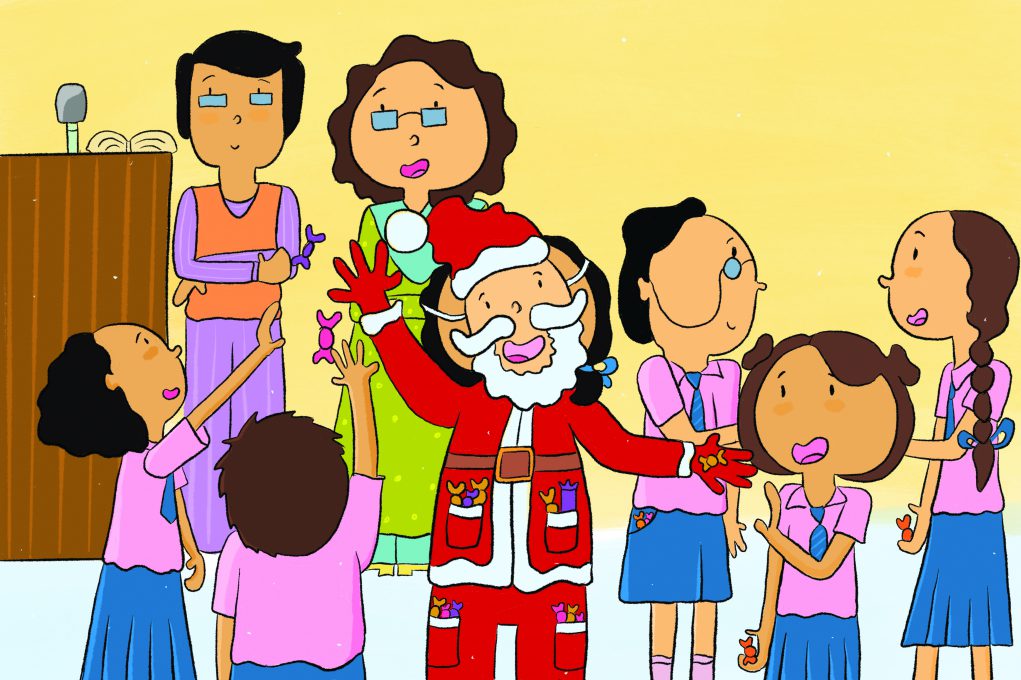 Santa’s pockets were filled with chocolates of different colours and flavours. All the children were desperately waiting for Santa to come to them.

Santa would sometimes throw a bunch of toffees, chocolates and gifts to the children sitting on the stage.

The children would then jump trying to catch them with shrieks and laughter. Watching the children enjoy, Ms Nancy and other teachers were smiling.

After the assembly ended, all the children went back to their respective classrooms. Santa had to now go to the playground, but Zeba was not willing to go there. Just as she was walking towards the ground, she noticed another Santa already there.

“Who is that?” Zeba thought to herself.

All the children thought the Santa on the ground was Zeba. The gang of the naughty children had made a plan like last year to steal chocolates and toffees from her.

George, Robin, Pinky, David, Salman and Rohan slyly excused themselves from their classes and rushed towards the playground. Just like last year, this time, too, they planned to forcibly snatch gifts from Zeba as Santa.

As soon as they reached the playground, they cornered Santa. They were surprised that Santa did not protest this time. Last year, it had been a struggle to get the gifts from her.

Circling Santa, George said loudly, “Come on, Santa! Give us all the gifts quickly.” But Santa remained silent.

Robin said sternly, “Hey, Zeba, why aren’t you saying anything? Last year you protested so much. Why are you standing silently as if you are dumb? Is your tongue paralyzed?”

Hearing this, everyone burst out laughing.

“Seems like our fear has made her dumb. When it comes to us, even the strongest ones become speechless. What is she then in comparison?” said David, boastfully.

“Well now, let’s hurry. Take all the gifts from her before a teacher comes around, otherwise, we will all be in trouble,” warned Rohan.

“Yes! Rohan’s right. Let’s quickly grab all the gifts from Zeba. Doesn’t she look like a huge pumpkin with all her pockets filled with gifts?” sneered Pinky.

“Oh, I remember! Last year, her cap was filled with chocolates, too. I am going to take them again,” said Salman and pulled at Santa’s long, red cap. The children froze in shock as soon as the cap came off.

They ran as the Santa was no one other than Ms Nancy. Watching them stumble and fall while trying to run away, Ms Nancy too started laughing.

Zeba and her friends who were watching the whole scene from a distance also burst out laughing. 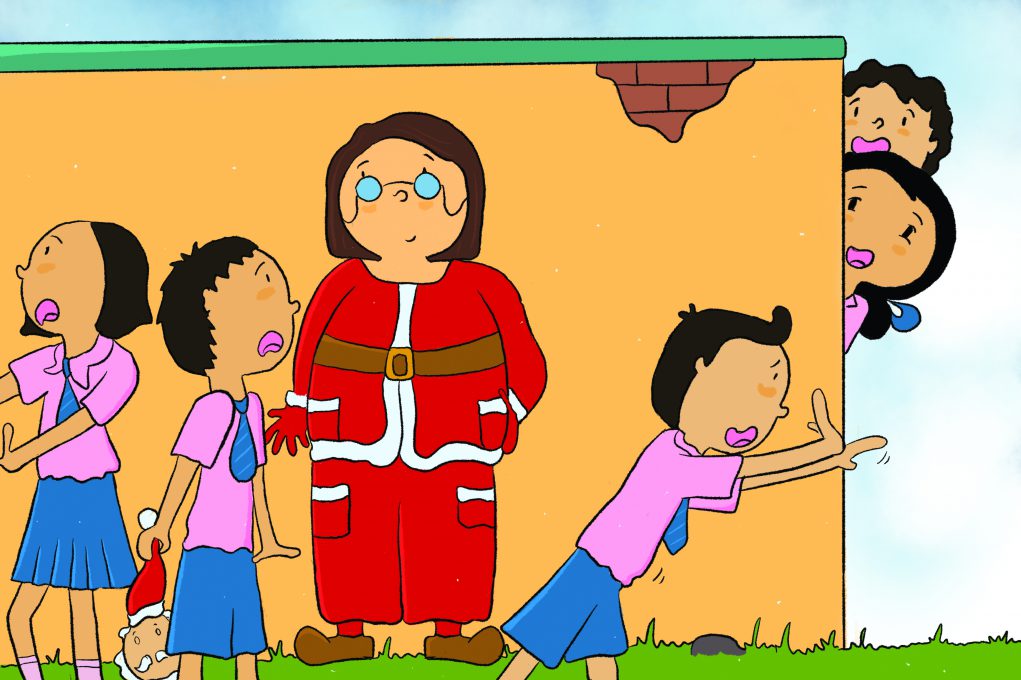 The naughty children went back to class and pretended as if nothing had happened. But in reality, they were terrified. They knew Ms Nancy wouldn’t let them off without punishment.

Ms Nancy had to teach them a lesson too. She then sent the peon to bring George, Robin, David, Pinky, Salman and Rohan to the principal’s room.

They came to the room with their hearts beating fast, wondering what Ms Nancy’s punishment would be. What if she expelled them from school?
Even before she could say something, they all started frantically apologising.

“Sorry, Madam. Please forgive us. We will never make such a terrible mistake again,” they pleaded.

Ms Nancy replied, “Children, I haven’t even punished you yet and
you are already apologising. Do you really think I look like a huge pumpkin?”

Their faces reddened and their eyes welled up with tears, “No Ma’am, you are very nice. We promise to never say such horrible things about anyone.”

Ms Nancy understood that the children had realised their mistake and regretted it. There could be no greater repentance than that—their regret was their punishment.

Wiping away their tears and handing them a chocolate each, she said, “Children you have admitted your mistake. That is the best thing to do. Remember not to repeat this mistake in the future. This chocolate is a reward from Santa for this. Now go to your class and concentrate on your studies.”

George, Robin, Pinky, David, Salman and Rohan had been taught a good lesson by Santa Claus that day. They promised never to repeat their mistake.

One thought on “Santa Claus’s Lesson”